An analysis by TRIDIVESH SINGH MAINI and MAHITHA LINGALA 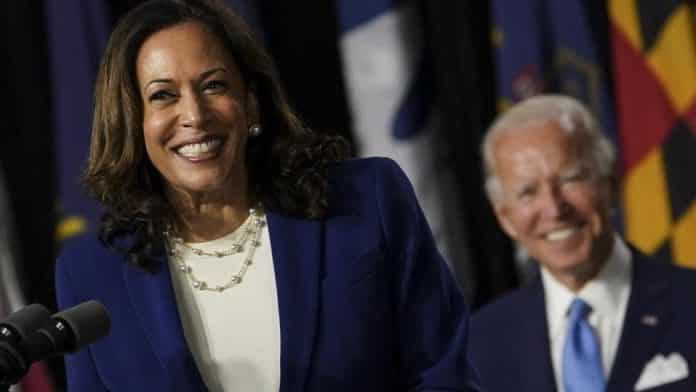 Despite some polls showing that President Trump is catching up with the Democratic Party’s presidential nominee, former Vice-President Joe Biden, most show that Biden remains ahead of Trump, even in states that are considered Republican strongholds. According to a CNBC Research poll, Joe Biden continues to lead in the swing states of Arizona, Florida, Michigan, North Carolina, Pennsylvania and Wisconsin. The report also suggests that the majority of the respondents prefer Joe Biden over Donald Trump to handle the coronavirus pandemic. It is important to note that Biden leads in the three states which Trump carried in 2016: Arizona, Florida and Michigan.

Many observers believe that due to the current global situation – economic and geopolitical – not much would change even if Biden were to win the presidential election in November 2020. In terms of foreign policy, the most important issue in the presidential election is likely to be the US’s relationship with China; the growing anti-China sentiment in the US is a factor that neither Democrats nor Republicans can ignore.

A Biden Administration in Washington would likely not adopt a fundamentally different approach to Beijing, according to many observers. The Democrats, including Biden, have taken an aggressive stance on China, despite some analysts arguing that China prefers a Biden Presidency.

Second, it is argued that while the economic narrative of the US had become insular with the rise of Donald Trump, the pandemic is likely to make the US even more inward looking in terms of economic ties with the outside world. While Democrat nominee Joe Biden has given the impression that he wants to improve economic ties with other countries it is unlikely that he would be able to make a significant departure in the short run.

There are those who argue, on the other hand, that US foreign policy under Biden is likely to be fundamentally different in a number of ways. First, having previously been part of the US establishment, Biden has more experience in formulating foreign policy and is likely to follow a more traditional approach. Biden’s team contains experienced individuals like Jake Sullivan, who served as deputy assistant to President Barack Obama and as policy planning director at the State Department, and Nicholas Burns occupied important high-level foreign policy positions under Presidents George W. Bush and Bill Clinton.

Given his experience, Biden will cultivate strong ties with US allies like the EU, UK and Japan. Trump, while adopting an aggressive stance vis-à-vis Beijing, has alienated US allies with his transactionalist approach. It must be noted, however, that Biden will need to bring together the various factions in the Democratic Party, many of whom have differing views on the US’s foreign policies. That will, almost inevitably, be an uphill task. Trump, on the other hand, is likely to find some domestic favour for his efforts to end the US’s never-ending wars among his other foreign policy achievements, including the sea-change in Israel’s relations with the United Arab Emirates and Bahrain.

Third, while Trump has been dismissive of multilateralism, Biden is likely to work closely with the North Atlantic Treaty Organisation (NATO) and revive funding of the World Health Organisation (WHO), which Trump had stopped.

Biden, Indo-US Ties and the Nomination of Kamala Harris as Vice-President

One country which is closely watching Biden’s statements is India. Biden as Vice-President pushed for closer ties with India. It would be pertinent to point out that, as a Senator, he supported the Indo-US Nuclear Deal. More recently, Biden’s recent announcement regarding his running mate has drawn immense attention. Kamala Harris, who is of half-Indian descent, will make history if Biden is elected to office in November, by being the first woman as well as the first Asian/African-American Vice-President. In her first speech since the announcement, Harris spoke about her Indian mother.

While Biden has spoken against Indian policies like the National Register and the Citizenship Amendment Act, which he sees as being discriminatory, he has nevertheless spoken in favour of developing robust ties with India. He has made some important announcements in the context of immigration. First, he will revise Trump’s notification regarding H-1B visas (the US President has suspended all H-1B visas issued after June until the end of the year). The announcement was a blow to the Indian IT professionals in the US who depend on the visa to remain in the US. In the same town hall event, Biden also said that he would ‘make it easier for qualified Green Card holders to move through this backlog’.

Second, he has stated that he will encourage professional students to stay on in the US. In his policy paper on immigration, Biden said that ‘high-skilled temporary visas should not be used to disincentivise recruiting workers already in the US for in-demand occupations.’ The paper also notes that Biden, if he wins the presidency, will work on increasing the number of visas that are made available to highly-skilled foreign nationals, and on removing the country-wise quota. Biden also proposes issuing Green Cards for foreign doctoral graduates because, as he said, ‘losing these highly trained workers to foreign economies is a disservice to our own economic competitiveness’.

Biden, along with Harris, held an event targeted at Indian Americans, where both reiterated their policy vis-à-vis immigration. Biden spoke about the need for strengthening strategic ties with India. The former Vice-President, commenting on ties with India in the event that he were elected, stated that he would advocate:

Standing with India and confronting the threats it faces in its own region and along its borders; expanding greater two-way trade that opens markets and grows the middle class in both our countries; taking on big global challenges together like climate change and global health security and strengthening our democracies where diversity is our mutual strength.

Biden also alluded to initiating “an honest conversation” with India.

Apart from the above policy issues, Joe Biden’s approach to issues such as Iran may be important for India. Unlike Trump, who has adopted an aggressive stance vis-à-vis Iran, Biden is likely to engage with Tehran and has spoken about joining the P5+1 Nuclear Agreement (or JCPOA: Joint Comprehensive Programme of Action). In 2018, Biden expressed regret when the US withdrew from the agreement. Some analysts predict that Biden could even reconsider re-instituting the JCPOA if he were to win. Biden has always favoured diplomacy, even during his vice-presidency years, has called for a ‘smarter way to counter Iran’, has criticised the Trump Administration for its reckless policies, including the killing of Iranian General Qassem Soleimani, and has blamed the administration for creating a reckless and unpredictable cycle of conflict.

The recent vote against the US’s proposal to impose an arms embargo on Iran at the UN clearly reiterates the need for the US to adopt a more pragmatic and open stance vis-à-vis Iran.

Biden and Harris: Difference from Trump

Trump’s policies, be it on the H-1B visas or Iran, have not been beneficial for India. While there is no doubt that the Modi Government has seen a convergence with the Trump Administration on strategic issues – the US President has not publicly commented, for example, on New Delhi’s revocation of Article 370 in Kashmir or its more controversial policies, such as the Citizenship Amendment Act and the National Register of Citizens – it is important to point out that both Biden and Harris have spoken positively on the issues that really concern Indians. Harris wrote against revoking the ‘right of spouses of H-1B visa holders to seek employment’ and supports the ending of country-based visa quotas, as well. She has spoken in favour of the restoration of civil liberties in Kashmir and has also reiterated that Indo-US relations are based on the shared interests and pluralist character of both countries. The Trump Administration, on the other hand, has been busy filling the vacancies in US immigration courts with conservative judges, whose collective efforts are becoming evident. A Transactional Records Access Clearinghouse (TRAC) at Syracuse University report notes that Bush- and Obama-appointed judges are resigning at record rates – more than 80 have resigned since 2017 – and are being replaced by Trump appointees (Figure 1, below). The Trump Administration has appointed more than 310 judges to the immigration courts that are run by the Department of Justice.

An illegal migrant’s chances of obtaining a favourable decision regarding his or her plea to remain in the US, if arrested, consequently, has fallen from 50 per cent during the Obama era to 25 per cent today. The Trump-appointed judges are more willing to deport migrants, it would appear, than were the judges under Obama, according to TRAC’s data (Figure 2, below).

More directly, however, both Trump and Biden – and their respective campaigns – recognise the need to woo the Indian-American community. As one report points out:

Around 1.3 million Indian-Americans are expected to vote in this year’s election, with nearly 200,000 in battleground states like Pennsylvania and 125,000 in Michigan. This has the potential to make or break presidential contenders in crucial states, as Indian-Americans generally register and vote at high rates.

In the 2016 presidential election, 77 per cent of Indian-Americans voted for Hillary Clinton, a Democrat, according to statistics by CRW Strategy, a research firm. However, this time, things could change. Recent surveys carried out by Republican pollsters claim that 50 per cent of Indian-American voters in key battleground states are moving towards Trump. This has been a cause of huge worry for Democratic candidate Joe Biden and his party.

No developed country can afford to ignore India, given the size of its market and increasing strategic relevance, and a Biden Presidency is unlikely to really change the direction of US foreign policy where India is concerned. If anything, there could be an expansion in the strategic and economic links between the two countries. What remains to be seen is whether the choice of Kamala Harris as his running mate helps Joe Biden in attracting more of the South Asian vote in general and the Indian vote in particular.

Mahitha Lingala is a graduate from the O.P. Jindal Global University, Sonipat, India.

This story was first published in Future Directions International. Read the original here.