Why Santa rides a surfboard to Australia 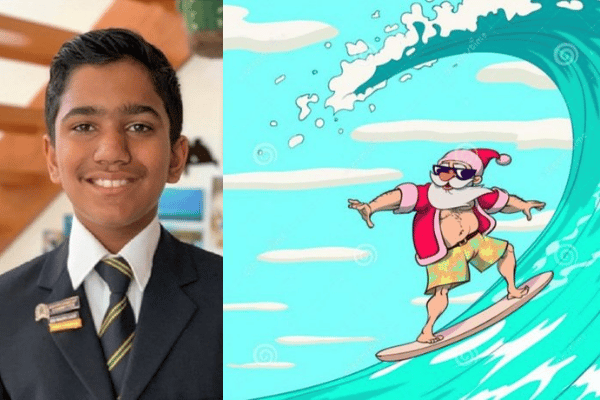 An excruciatingly cold and windy blizzard was taking place in the North Pole. Santa had one more trip to Australia to deliver his presents before he could relax! As Santa achieved a clear view of his sleigh, he noticed that it was being pulled into the air by the wind like a kite, and his 8 reindeer were trying to hold back from being flown away! With snow piled up on his coat, he leaped onto his sleigh with all his might, to weigh it down. But as the wind got stronger and stronger, the ropes attaching the reindeer to the sleigh tore apart. Santa’s sleigh was now loose, and Santa was flying!

Luckily, they were nearing Australia, and the wind came to a sudden end. Santa came crashing down on an island, his sleigh smashed to pieces.

With no one to assist him, Santa thought all hope was lost. His eye then fell on a piece of wood broken off from his sleigh. It looked like a surfboard.

An idea occurred to him….

Soon he had ripped off his shirt and was surfing his way to Australia!

A nice barbecue awaited him at the end of his adventure.

Lohri and Pongal for the kids