Only a few years ago, the Sub Continent Friends of Labor (SCFOL) struggled to get 40 people in a room to link the migrants to the values of ALP.

In this year’s meet-and-greet held on 13 February, there were over 200 people at a dinner and standing room only. 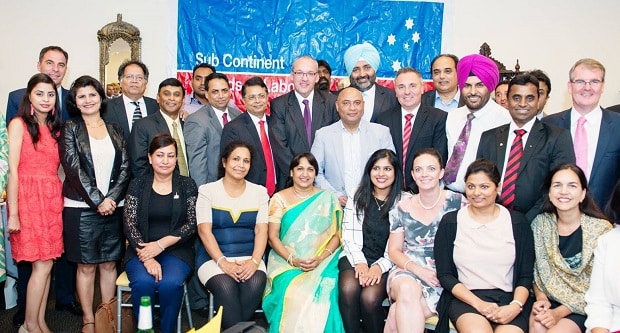 Politicians speaking at the evening espoused the Labor values of equality and fairness. Chief Guest NSW Labor leader Luke Foley reminded all that this dinner was being held in the blue collar suburb of Granville, “Not (as) a lunch in exclusive Point Piper.”

The NSW State elections are less than seven weeks away. While there has been a surprise change in government in Queensland from the unpopular LNP to the Labor Party, and while the polls are dire for the Federal LNP government under Tony Abbott, NSW is not expected to bring in any surprises when it goes to the polls come the end March. It is likely that there will be leakages away from the ruling Coalition in NSW, but the swings will probably not be strong enough to actually change government.

Having said that, a week, let alone seven weeks, is a long time in politics; and while there are elections to be fought and democratic values to uphold, even a weak opposition needs to rally its supporters.

Labor leaders were out in force to meet with Sydney’s subcontinent community. The heads of various unions such as Unions NSW John Lenon were present. Labor politicians and aspiring Labor candidates standing in the 28 March NSW elections were also keen to be seen with their supporters from the community.

Shadow Minister for Multicultural Affairs Michelle Rowland and Parramatta MP Julie Owens (both looking radiant in their Indian attire), made their presence felt too. Minister Rowland in her speech spoke of the danger of the revival of the watering down of the anti-vilification laws which were shelved by the Coalition late last year. She also reminded everyone that one-term governments are not unheard of these days as Labor ramps up its political battles in NSW and at the federal level.

In his speech, NSW Opposition Leader Luke Foley spoke of Labor values of a ‘fair go’ for all. Health and education, as expected, played a major role in his address, but he also spoke of the wealth that can be created through Labor values. “Labor is also a party of opportunity,” he noted, opening the door for further discussion from the migrant communities of the sub-continent, some of whom are embarking on business ventures.

The evening was attended by not only people from the Indian community but also from Pakistan, Bangladesh, Sri Lanka and Nepal, a true mix from the sub-continent. Speeches by Raj Dutta, Ijaz Khan and Amarinder Bajwa were well received and candidates from the ALP for the next NSW elections got a chance to meet with their sub-continent supporters.

The power of petals