Home Australia News Singing to his own tune

HSC 2018 is all but finished, with one final agonising wait yet – for that ATAR, due tomorrow.

Kiran Gupta of Sydney Grammar School is experiencing mixed feelings alongside every single one of his peers. However, he can rest a little easier knowing his hard work in Music 1 has earned him a coveted “First in Place” award, beating thousands of other students across NSW.

It must be particularly satisfying, given that enroute to that top rank, he had to overcome a serious medical condition that struck unawares.

“I was absolutely overjoyed and quite blown away [when I found out],” he tells Indian Link.

“Music is such a personal thing, it felt quite validating when people connected with my singing.”

A singer since he was 10 years old, and influenced by Delta Goodrem, Kiran’s love of music comes from an interest in people. 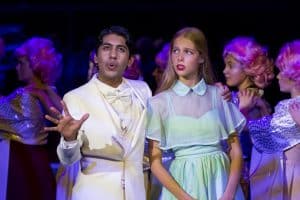 “I find music to be a really good tool for connecting with both yourself and society. When you do this, it allows you to flip [social] boundaries and inspire social change.”

Inspired to study music because of his passion for it – “I wanted to do subjects I would enjoy (as much as you can enjoy an HSC subject)” – Kiran’s course is a highly practical one, where upto 70% of a student’s mark can come from a live performance of 5 pieces of their choosing. They may choose to perform these pieces either vocally or with their preferred instrument.

“My friends were doing more typical subject patterns, very maths- and science-heavy. I find those weren’t really for me – I’m not particularly strong at them. Music was a good choice for me for that reason and also because it was a good break from the monotony of my other subjects.”

In the lead-up to his final music exams, Kiran’s study method was simple but effective.

“For the practical component, I was performing as much as I could to get as much experience as possible. Doing that allowed me to increase my confidence for the final day.”

The numbers he picked were Why God Why (Miss Saigon), I Guess That’s Why They Call It the Blues (Elton John), She Cries (Songs for a new World), Anthem (Chess)

“For my theory exam, I listened to a wide variety of music and made sure I was comfortable with any type of music they could ask me about. I’m glad I did – in the HSC exam they had a few questions on a Bollywood remix of Swedish House Mafia’s Don’t You Worry Child that many students hadn’t expected!”

However, right before his performance assessment, disaster struck.

“One day I woke up completely dizzy, throwing up and unable to walk. The Royal Prince Alfred Hospital put me right in the stroke ward. They found a lump under my tongue, and fearing lymphoma, put me straight into surgery. Later, I was diagnosed with acute cerebellar syndrome, a neurological condition. This condition affected my stamina so much I had to change one of my performance pieces that I had been working on for months before a week before the assessment.”

Going through this journey made this outcome even more special for Kiran, who would also go on to be nominated for Encore, a showcase of the best performances by Music students across the state held at the Opera House.

“It was quite a euphoric feeling, knowing that my hard work had paid off.”

How would he advise other youngsters in our community who want to do creative-type subjects but are discouraged because ‘they don’t scale well’?

“I would say, go for it. I go to a selective school and many people advised me not to do music because it doesn’t scale well. Yet it ended up being my best scaled mark – which shows that if you have a passion for something,that is the most important thing. If I did 4U Maths, I would not have got the results I got. I would say, follow your passions and the ATAR will come, because if you enjoy a subject you are going to do much better.”

As a singer, what tune has he caught himself humming today?

“Red in Black from Les Miserables – I’m currently performing at Manly Musical Society’s production, playing Joly one of the students.”

With his ATAR result still to come, Kiran has high hopes for the future.

“I would like to study Arts/Law at Sydney University, majoring in Media and Communications, but would still like to pursue music as a performer. My ultimate goal is to get a record deal and hopefully land a reality TV show or end up in musical theatre.”