Some 1000 Indian-origin Australians came together at Parramatta’s Jubilee Park to pay tribute to the victims of 14th February Pulwama attack in Kashmir.

The last time they had gathered here was only months ago, when the President of India Ram Nath Kovind unveiled a new statue of Mahatma Gandhi. This time round, the apostle of peace stood mute witness as his beloved countrymen expressed sorrow as well as frustration at a tragic crisis situation that has endured for too long with no resolution.

The wish for peace was at the centre of the dignified ceremony organised by the Hindu Council of Australia along with 27 other community organisations.

Many of the attendees had left work early; others streamed in off the Parramatta station with their briefcases and laptops and sat patiently on the ground for the 45-minute ceremony.

The Indian tricolour was out in solemnity, sometimes wrapped around like a shawl.

Community activist Rahul Jethi urged those gathered there never to forget the valour of the heroes of India and their supreme sacrifices for their motherland when he recited Shyam Sundar Rawat Gadarwara’s poem Hey Bharat Ke Ram Jago. The poem steeped in nationalism brought on the goosebumps and led to one of the many times during the evening when the slogans of “Bharat mata ki jai” (Hail Mother India) and “Vande Mataram” ripped through the air.

Local politicians Tony Issa and Julia Finn from Granville speaking on behalf of the NSW Government and Opposition also expressed their solidarity with the people of India and those gathered at Jubilee Park, with their condemnation of this heinous act of terrorism. Issa said that he felt for the families of those who died in this terrorist attack. Julia Finn, in her speech said it was devastating to hear the news from Pulwama. “Terrorism needs to end and I sincerely hope that this is the last time India has to endure such an attack,” she said.

Speaking on behalf of the organisers, Hindu Swayamsevak Sangh leader Ramyavaran Ramaswamy urged all to remember the valour of those martyred. “It is important we acknowledge the families of the braves who were martyred. We also need to celebrate the lives of these brave men.” He then attacked Pakistan for harbouring the mastermind of this attack amongst their midst – the Jaish-e-Mohammed terrorist organisation and its leader Masood Azhar, who has taken responsibility for this terrorist attack. “And this is the same country which has allowed the world’s most infamous terrorist Osama bin Laden to live amongst them,” he reminded all. He urged all to keep up the fight against tyranny and make sure the sacrifices of those killed on 14th Feb do not go in vain.

With the sun setting in the background, the sole bugle call of The Last Post paid homage to the fallen soldier. The group rendering of the Shanti Mantra invoked the wish for peace, not just in the troubled Kashmir region, but also in the universal, collective and individual levels.

The mood was sombre at the Dezire Function Centre at Blacktown as over a 100 people gathered to pay tribute those martyred in the Pulwama terrorist attack in Kashmir. Organised by the Federation of Indian Associations of NSW along with community members, this was one of the many such condolence ceremonies held around Australia. 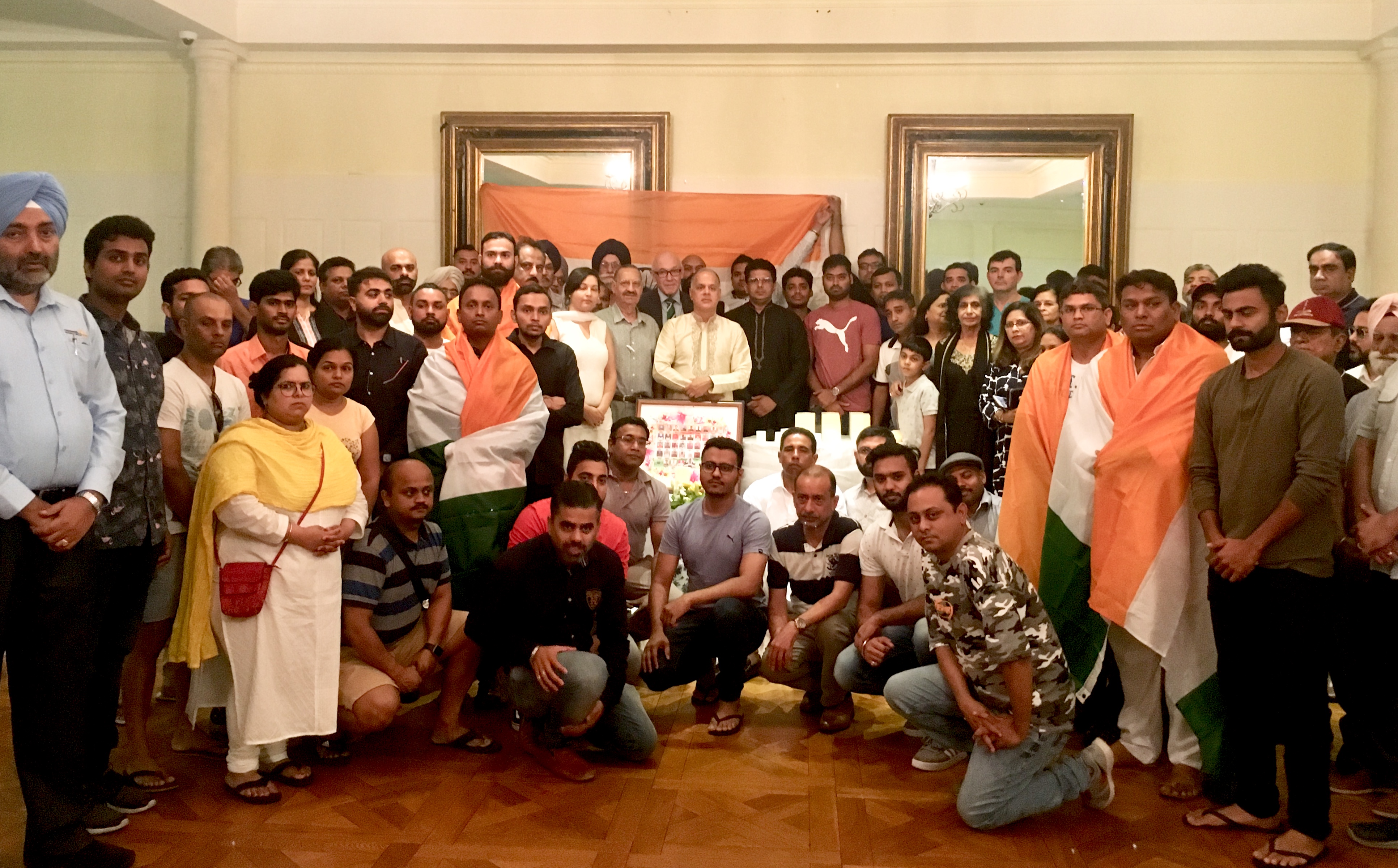 Demonstrating the manner in which the terrorist attack has hurt the community at large, those who were gathered were not only from different age groups but comprised of Indians recently arrived as well as those who have been living in Australia for over 25 years.

Dr Yadu Singh, President of FIAN, opened with his views condemning the attack on innocent soldiers by a terrorist group that had claimed to have been behind the plot. The martyred came from all religions and states of India, he said, making this essentially an attack on the concept of India. He further accused Pakistan for supporting and facilitating the infrastructure of the groups which are involved in cross-border terrorism.

Shobha Ingleshwar’s rendition of the national anthem this time round seemed especially evocative.

Member for Epping and friend of India Damien Tudehope expressed his shock and support for India in his brief speech: his belief was that 300kgs of explosives (as reported then) could not have been organised without external support from another country. He felt that Australia should reconsider having cricketing ties with countries that support terrorism and such heinous attacks.

Hills resident Rajiv Chaudhri, one of the organisers, expressed profound sadness at the most recent attacks; being the son of an ex-Indian Naval Officer who had fought three wars, he felt deeply for the families of the fallen soldiers. Other ex-servicemen who also spoke, put the recent tragedy into perspective for all present.

Various members of the community also expressed their shock at this terrorist attack in Kashmir. Indian-origin candidate for the NSW Senate in the forthcoming State elections, Pallavi Sinha said that terrorism in any form is abhorrent. “A lot of us may be experiencing various emotions ranging from shock and anger to sadness. I urge everyone to remember Mahatma Gandhi ji’s words ‘An eye for an eye only ends up making the whole world blind’. So let’s channel any emotions we are feeling into constructive ways to find solutions to the horror of terrorism and the loss of innocent lives.”

With emotions running high, there was a strong backlash against Pakistan fostering and promoting terrorism against India. It was said that Indians in Australia must exert pressure on the Australian government to condemn this cross border terrorism more strongly.

It was an afternoon of solidarity with the Indian defence forces and the many sacrifices they make in allowing Indians to enjoy their democratic freedoms.

Above: Protests against Pulwama at Townhall, George St. Protestors marched to Martin St and plan to give Pakistan Consulate General in Sydney a memorandum

A day after the peaceful homage to the martyrs of the Pulwama terrorist attack, a group of about 100 protesters took to the streets of Sydney. With placards urging Pakistan to stop supporting terrorism, the protestors marched from Town Hall to the Pakistani Consulate in Pitt Street.

Their passion was clearly on full display as their chants of Bharat Mata ki Jai (Hail Mother India ), Vande Matram and Pakistan Murdabad (down with Pakistan) drew the attention of the lunch-time city crowd. Curious onlookers from office buildings watched as the group, some draped in the Indian tricolour, staged their protest, escorted by about half a dozen members of the NSW Police. 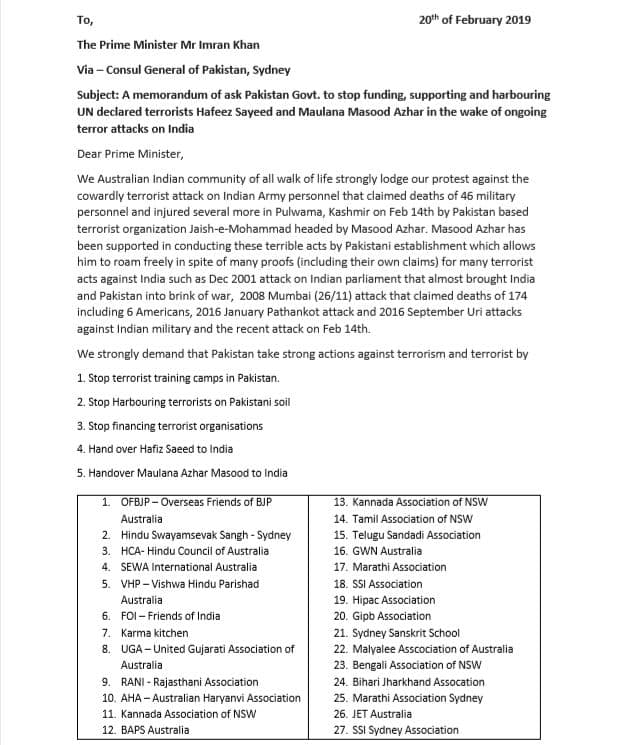 Reaching Martin Place, a small group was then escorted across the road to the Pakistan Consulate in Pitt Street. Though initially it was agreed that half a dozen representatives will present a petition signed by 27 local India Australians calling on Pakistan to stop harbouring and giving refuge to declared terrorists, the police informed the protestors that the Pakistan Consulate was no longer available to receive or meet with anyone as it was past the 1 pm public visiting hours. The Pakistan Consulate had suggested that the petition be handed over to the police who will pass it on to them.

The protestors dispersed peacefully after ensuring their voices were heard and their written word reached its destination.

To make a donation to the martyred soldiers’ families, head to bharatkeveer.gov.in