The doctor as a spokesperson: A new vision for AIMGA 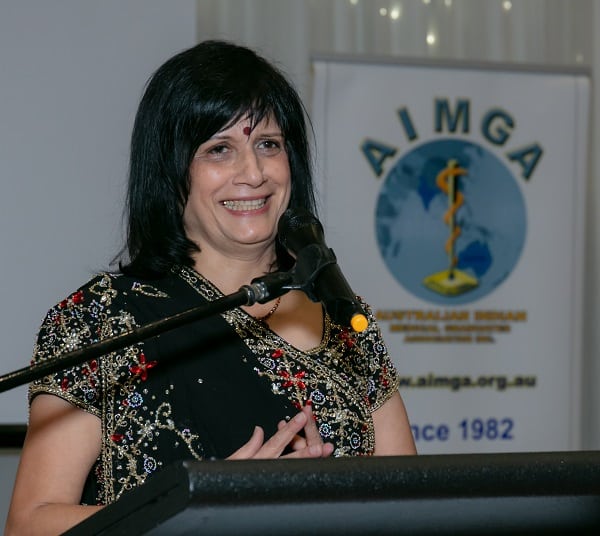 “I would like AIMGA to become more forceful as an organisation in coming years,” Dr. Palu Malaowalla, new President of the Australian Indian Medical Graduates Association said
recently.

At the association’s annual dinner, she spoke of a longer-term plan which included tackling wider social injustices – and perhaps not so cheekily – being on Prime Minister Scott Morrison’s fingertips as an agency to call in times of need.

Highlighting the year’s activities, she listed the proactive measures taken in the areas of community-based health programs, health awareness and fund-raising. The association raised $10,000 for Cure Cancer Foundation Australia this year (an issue close to Malaowalla’s heart given her own personal history with it) and has set lifestyle examples with endeavours such as City2Surf in the mainstream, and dancing as a form of leisure as well as physical activity in our own community. (A glimpse of the said exercise was presented later on that evening, by the self-styled ‘Bollywood doctors’.)

The coming together of agendas mainstream and community, was a theme that quietly underscored much of the event, including entertainment.

Special guest Manish Gupta, Consul General of India (Sydney) congratulated Indian-origin doctors who first came to this country in the 1970s and earned the respect of the local
community with their professionalism and dedication.

“There is now much you can do to contribute back to your motherland,” he said. “The Government of India’s Ayushman Bharat scheme announced recently will see free healthcare programs rolled out to some 500 million people. Preventive healthcare, of such high quality here in Australia, is one of the areas in which you can help.”

No doubt the doctors have taken note, even though many in the association have for years been contributing back to their country of origin in many ways, and wherever else the need is felt, such as in Fiji and the islands of the South Pacific. Member doctors Nagamma Prakash, Prabha Chandra and Purushottam Sawrikar were felicitated on the night for their
long-term service to the association.

Special guest Geoff Lee, Minister for Skills and Training, thanked the doctors for their service. “You make a tremendous contribution to the health system and to the community. I congratulate AIMGA for bringing doctors together, for your work and your charity.”

Singer Kamahl, admittedly, was an unusual choice for keynote speaker, given the tradition in recent years of having leading medical communicators address this flagship event. Yet his story touched a chord, particularly with the early-arrival doctors who must have had similar experiences of fighting to fit in.

Ever the storyteller, the 84-year-old Kamahl regaled with his recounts of excelling in sport to counter the social isolation and reinventing himself as an entertainer to gain acceptance. He presented nuggets from his life story with self-deprecatory humour – imitating Nat King Cole, going to the Conservatorium of Music and not being able to ‘handle Handel’, an unusual marriage proposal, and meeting members of the British Royal family and Australian ‘royalty’ Don Bradman.

His cleverly picked song for the night, My Home, knocked back repeatedly by the record companies, spoke for everyone present: This is my home, this is my country, a land I’ve grown to love. So did his recital of Invictus by William Ernest Henley, a recent love that was presented at last year’s Invictus Games. By the time Kamahl presented his well-known track Desiderata on the lessons for life, he had the audience eating out of his hands. A living legend that we should hear more from, certainly.

Wrapping up the event later, Vice president Smita Shah observed, “AIMGA has seen an increased collegiality, which is helping us all in our day jobs. We are also growing in numbers, having reached out to Newcastle-based doctors recently.”

Clearly Palu Malaowalla brings much enthusiasm to her new role as President, and has won the admiration of the group she leads. Both these aspects should serve her well in her lofty aim of getting on to the Prime Minister’s speed dial, but she has her work cut out for her.

For an organisation that has been around since 1984, it is time the boundaries are expanded to participate significantly in debates of national as well as community import, perhaps with the Australian Medical Association as a model. Climate change as a health emergency, asylum seekers, anti-vaxxers, aged care, private health, data sharing, e-cigarettes and vaping are all contemporary issues to which meaningful contributions could be made by a medical organisation that is seeking greater exposure.

AIMGA seems well-equipped to do this: membership is high-profile, and includes some decorated doctors who have made significant professional contributions. Clearly lacking, though, is the presence of early and mid-career professionals, and more robust use of new media. Both of these will help not only in the new aim of increased community outreach but also in the organisation’s originally stated aim of liaising with other professional bodies to enhance the interests of its members.