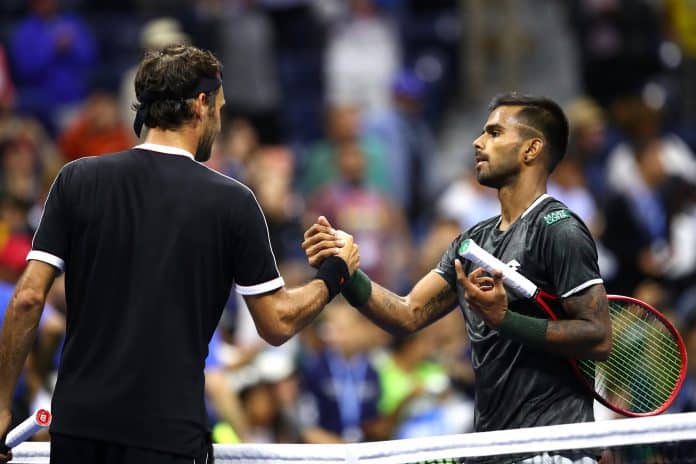 Reading Time: 2 minutesFormer World No. 1 Roger Federer has heaped praise on Sumit Nagal, saying the 22-year-old Indian played really well in the first round contest of the US Open which was won by the Swiss legend. On Monday, Federer overcame a scare from Indian qualifier Nagal to win 4-6, 6-1, 6-2, 6-4 in a match that lasted two hours and 30 minutes. “I think his game is based on being really consistent,” added Federer.
Sumit Nagal became the first tennis player to win a set in the first round of the US Open against Federer since 2002. “He moves well, moves the ball around well. Sort of very much a clay-courter. That’s also the surface he’s played basically the entire year almost’ said Federer.
India legend Mahesh Bhupathi also hailed Sumit Nagal and said that the youngster showed “incredible” composure to bag the first set against the Swiss legend. “I think both he and his coaching team should be very proud of the improvements they have made this year,” the Indian tennis great and Davis Cup non-playing captain added.
Before Nagal, Rohan Bopanna (7-6, 6-2 in 2006) and Somdev Devvarman (6-3, 6-3 in 2011 & 6-2, 6-1, 6-1 in 2013) were the other Indians to take on the five-time US Open champion.
World No. 190, Nagal, walked onto Arthur Ashe Stadium for his first Grand Slam main draw match without having ever earned a tour-level victory. Nagal sent heavily-spinning shots over the net and used the court well and won the first set 6-4 as Federer made 19 unforced errors.
Once Federer cut down his errors after the first set, he kept on top of Nagal, and recovered to enter the next round where he will face Bosnia’s Damir Dzumhur. Before the match, Nagal had said he would try to enjoy the game and not think too much about whom he was playing against.
“I want to play him. It doesn’t matter. It’s not about winning or losing all the time. It’s just the experience. It’s playing someone who has 20 Grand Slams,” Nagal had told ATP Tour website.
“I don’t care what the commentators will be saying about me on TV. I’m going to be enjoying the crowd, playing the best tennis player ever. I’m just some dude from India. I’m fine with that until I make my name. That’s it,” he added.
IANS