Ranveer Harsh: Young Indian actor gets his big break on 10Play’s How to Stay Married 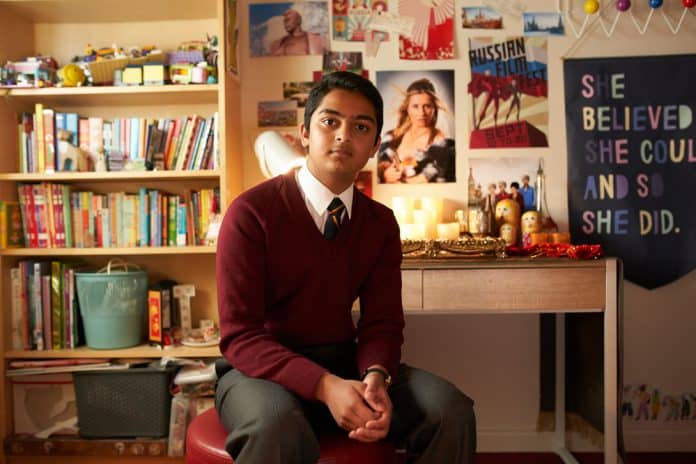 When 17-year-old Melbourne lad Ranveer Harsh went in for his audition for Ten’s second season of How to Stay Married, he had a huge pimple on his forehead.

It probably helped him score the role of the nerdy Indian school kid Ravi.

“At the call back, alongside some of the other actors, the awkwardness and the ability to improvise helped me to find my inner Ravi,” Ranveer laughs as he chats with Indian Link.

Ravi is the friend of Sophie Bulter (Willow Ryan-Fuller), the teenage daughter of Greg (Peter Helliar) and Emily (Lisa McCune). The series follows the travails of middle-class family life in suburban Australia, where people of colour have been part of the landscape for years, but only recently so in the world of mainstream TV.

Awkward… is a term that comes up more than once in the conversation with Ranveer, even though he is an articulate, mature and self-assured young man, quite unlike the character he plays.

“My favourite scene in the series is perhaps the first time I meet Peter’s character Greg,” Ranveer recounts. “We had a blast filming it, the awkwardness of it all.”

As a serious Star Wars fan, Greg is not impressed that Ravi thinks the sci-fi show is “a bit over the top” and that he prefers Bollywood movies. (As if Bollywood’s not over the top, Greg replies, eye roll in tow). And yet, at the end of the first episode, Greg has converted the Indian boy to a fan.

The friendly fist pump between the two new buddies, though, is still executed awkwardly, and is probably a hint that a reverse transformation in cine stereotyping, ie, Greg sitting down to watch a Bollywood flick with Ravi, is unlikely.

For Ranveer however, it’s been a great learning experience. “The takeaway from the show is to embrace who you really are, and to respect others for who they are.”

He adds, “For my own self, I’ve learnt that if I really want something, I can get it if I dedicate myself to it and give it my full 100 percent. It’s been an incredible experience working with actors I’ve admired for so long. I’ve made loads of new friends too. And seeing it on TV this week, was quite incredible.”

Ranveer may have lost his natural Indian accent, having moved out of the country as a five-year-old, but he loves to play with it.

“I love what Russell Peters and Kunal Nayyar have done with their Indian accents,” he observes, revealing his influences. “Peters’ version of it in between his stand-up routine is just hilarious, and even though Nayyar’s is more authentic, his comic timing is brilliant. I’ve loved putting the Indian accent to good use in my own amateur YouTube videos.”

He also lists as his influences Tom Hardy and Robert de Niro, and from Hindi films, Amitabh Bachchan, Irrfan Khan and his namesake, Ranveer Singh.

Peters and Nayyar notwithstanding, Ranveer’s work in How to Stay Married is reminiscent of another Indian actor, Adhir Kalyan (Rules of Engagement). Perhaps it’s the scholarly rebuttals in everyday conversations: “Star Wars? I mean, who fights wars in space?”

Ranveer’s first acting gig dropped into his lap when he was but ten years old.

“I was in Year 5 at school in Auckland, NZ, and took home a note from school about auditioning for a TV ad,” he describes. “It got me the lead role in an ad for NZ’s SKY TV.”

On the first day of the shoot, the young Ranveer was transfixed. “I was fascinated with the set and the hustle and bustle of the activity, and knew instantly that this would be a very important part of my life.”

From then on, it was an easy entry into theatre; he made his debut with Tom Sawyer and then followed up with Oliver Twist, The Tin Man and The Wizard of Oz.

Moving to Australia as a 13-year-old opened up avenues on screen: the last four years have seen him finish three short films and a few commercials, including one for the Australian Education Union Victoria as lead actor.

“I’m currently in Year 11 at Point Cook Sr Sec School, and drama is not an option as a course of study but I’m doing literature and thoroughly enjoying the drama and creative aspects of that.”

The path after school seems set already – he’ll be studying acting of course.

Luckily for people his age, Indian-Australian parents are now pushing less for maths and science, medicine and engineering. What advice would he give to others like him who want to get into the performing arts? What would he tell parents?

“Parents want the best for their kids. But you’re right, the mindset is changing. Kids have their own passions and motivations. At the end of the day, if there is talent, nothing can stop you. My own parents supported me from Day One. To other youngsters, my message is, get involved. There are many theatre groups out there that you could be a part of. In pandemic times, find something online – it’s not hard.”

While the mindset may have changed for migrant parents, the industry is very slowly changing too, and migrant kids are seeing more people like themselves on TV than ever before. What would Ranveer do to further improve this?

“I’ll continue to be involved, put myself out there, make connections, and present my skills as best as I can.”

He adds with maturity, “I’ll also continue to motivate myself. Maybe I’ll write – from the perspective of a person of colour.”

Nary a hint of awkwardness there.

READ ALSO: SBS TV’s The Hunting reiterates how unsafe we all are online