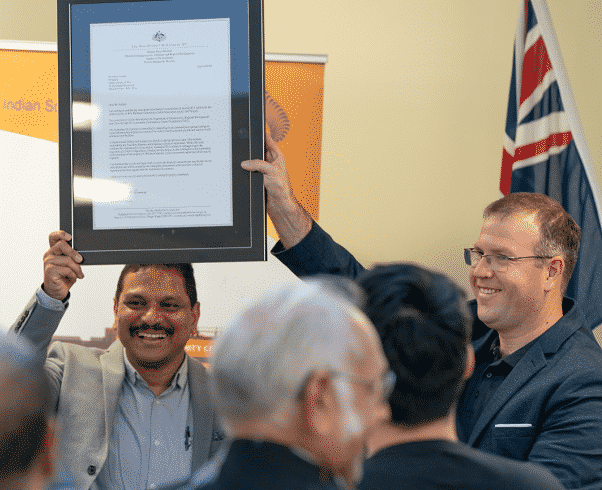 Reading Time: 3 minutesIf all goes well, Perth’s Indian community will be celebrating India’s Independence Day this August at their own premises, the Indian Community Centre.
This will be possible thanks to a $2.5 million grant announced by the Deputy Prime Minister Michael McCormack (also the Minister for Infrastructure, Transport and Regional Development), to the Indian Society of Western Australia (ISWA).
For Surya Ambati, President of ISWA, the announcement could not have come at a better time, as the association marks its 50th anniversary year. It has spurred him into action for this project with renewed vigour.

“It’s been a ten-year dream,’ he told Indian Link. “Most communities have their own centres, and our numbers have grown substantially to warrant our own premises. We are grateful to the Minister and the Government, and especially to the Honourable Ben Morton and Dr Mike Nahan in guiding us.”
Describing the project, he said, “The multipurpose Indian Community Centre will be used for events, festivals and activities including education programs, day-care for aged as well as providing a dedicated space for locals with Indian heritage to come together and celebrate their culture and traditions. Weddings and special events will also be a regular feature, given that various venues currently hesitate about our homam ceremonies etc.”

The association has had a home of sorts for the last four years at Willeton Community Centre, but shares it with two other mainstream community associations including Willeton Sports Club.
It has identified a property at 12 Whyalla Street Willetton WA and is in the process of acquiring it. Within 10 km of Perth CBD and easily accessible via major arterial roads, the property is well situated. A large shed stands on the site at the moment, and plans are to commission a modern structure with hospitality and function centre facilities.
“We are currently fund-raising for the last $180,000 to seal the deal, and then use the government grant towards refurbishment,” Mr Ambati revealed.
His association has until April 30 to collect the funds in order to avail the government grant.
“We are confident we’ll get there,” Mr Ambati revealed with enthusiasm. “We’ve raised the rest of the required $720,000 already, thanks to our community members who are all donating generously. We’re hoping to inaugurate on August 15.”
Donations are sought via the ISWA and WA Indian Docs jointly (tax deductible).
Donate $1,000 or more to become a Founding Member of ICC. Founding members will have their names displayed on a plaque at the Centre on completion.
For more details, please visit the ISWA website.

ISWA is an umbrella body representing 70 separate Indian community associations in WA. Besides organising large-scale events to mark milestone dates such as festivals and national days, it has done valuable work at the grass-roots level, including welfare for the seniors, streamlined and well-orchestrated kids’ activities such as chess tournaments. In a recent drive, ISWA encouraged large numbers of adult migrants, especially women, to learn swimming.
If ISWA is able to realise this cherished dream, it will set a welcome precedent for the Indian communities in Sydney and Melbourne to follow.