Manjunath Hukkeri and his wife Sujatha of Schofields NSW took home the first prize of $1501 for their traditional design. The second prize of $501 was claimed by Sarita Kadukar and her husband Appurv, also of Schofields NSW, for their design which was steeped in history.

Judged via Zoom, the prizes were announced live on Indian Link Radio by Station Director Ekta Sharma, on the eve of Diwali.

“We are so thrilled to win this prize,” Manjunath told Ekta on air. “It has made our Diwali.”

Manjunath and Sujatha gave their home extensive coverage – not only on their front façade which was fully illuminated but also along their driveway, retaining walls, letterbox, windows and pillars. Laser lights projected colourful designs onto the walls. Diyas and Om symbols, half a dozen in number, adorned the walls, fashioned out of steel wire before being wrapped in string lights. Bronze Lakshmi-Ganesha statues, Diwali symbols such as kalash, Swastik and peacocks, and jasmine flowers added to the traditional feel, as well as a stunning rangoli topped off with a shiny bronze charan paduka (goddess’ feet) ornament. 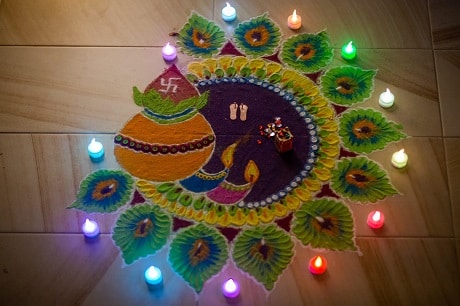 “We’ve been planning this since last year’s Diwali,” Manjunath revealed. “On our annual trip back home late last year, we had a huge shopping list for this. Diwali had passed of course by then, but we sourced out stockists and wholesalers and found some authentic, traditional items for our decorations.”

For second prize winner Sarita Kadukar, this Diwali was dedicated to a hero from history, Chhatrapati Shivaji. The elaborate light decorations included no less than 60 diyas, besides fairy lights and string lights. Floral garlands, the traditional genda in particular, complemented the lights throughout, in jhoomars, latkans, thorans and Tulsi vrindavans.

A significant highlight was the zanjira, a tableau common in Maharashtrian/central Indian folklore, depicting a scene from Shivaji Maharaj’s life and times. Modelled on a real-life fort built by the Maratha ruler, the Kadukar zanjira featured military and rural scenes. It was painstakingly handcrafted out of recycled material like waste cardboard and upcycled milk bottles.

Lotus flowers and footprint symbols to welcome the Goddess Lakshmi were used abundantly throughout the massive rangoli that stretched all across the driveway, in the centre and on the sides, and at the threshold.

It was a wonderful surprise to learn later that the two prize winners are in fact, next-door neighbours. Both couples took a whole week off work to put their designs up for the Diwali lights contest.

“The hardest part for me was to cook,” Sarita Kadukar revealed to Ekta Sharma on Indian Link Radio. “We worked throughout the day, and I found that alongside looking after my one-year-old, there was no time to cook. Our neighbours on the other side came in to help, first with food, and later with everything. We are truly grateful to them.”

(Her daughter was born on Diwali night last year, and named Ramaa after Lakshmi, the Hindu Goddess who is venerated on this night.)

The two neighbouring Diwali designs, based heavily on culture and history, included many traditional and folk-based depictions that are unusual even in displays in today’s India.

As such, their homes played host to hundreds of visitors dropping by to have a peak, many of them complete strangers.

The number of teachable stations in both designs was also high, adding to their inspirational value.

“I heard many kids say to their parents, ‘Mum, Dad, look at this – we could make this at home!’. To me, that was immensely rewarding. This is how we maintain aspects of our culture, and in fact, see it grow,” Sarita said.

Scott Eddington, Managing Director of Asia Pacific for WorldRemit, said, “It’s been an absolute pleasure to be connected to this year’s Diwali via the Virtual Festival of Lights competition, and to shine a light on such magnificent diversity in Australia. To all those who participated in this contest, to the Indian community and indeed to all Australians, I’d like to say on behalf of WorldRemit, Happy Diwali, and may your lives be filled with the light of knowledge, good will and harmony.”

Pawan Luthra, CEO of Indian Link, said later, “While these two homes may have won, others in the competition were by no means less commendable. The effort that went into each was clearly evident to all. In the end, all contributed to Indian Link’s ultimate aim: that people should drive by or walk past to see our Diwali decorations, just like we’ve been doing for years at Christmas time. By participating in this contest, you have helped that become a reality.”