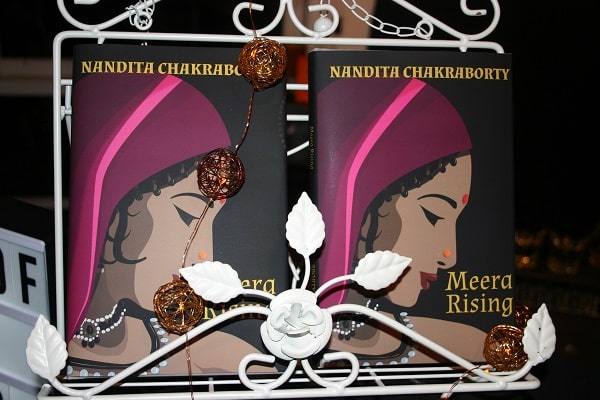 With her latest literary offering, Meera Rising, Melbourne writer Nandita Chakraborty folds myth into modernity to create an interesting tale of a modern Mirabai.
The book is inspired by the life of Mirabai, a 16th century Rajasthani princess renowned for her devotion for Lord Krishna.
Mirabai was known for her compositions dedicated to her beloved Krishna and for breaking traditional boundaries for her spiritual yearnings.
Nandita, who conducted a three-year research into the subject of Mirabai, claims her novella is not so much a book of God as it is a book of love.
“I have nieces and nephew who are millennials born and brought up here. It will be too blasé to put a culture in front of them that they don’t understand at all. So I decided to tell them a tale of love that they will relate to,” said Nandita, sharing the main reason why she wrote the book. “I want to convey through this book that God is not a myth but just a higher form of love,” said Nandita.
The book’s main character Meera Sen lives in Australia and returns to her homeland India to reconnect with her family.
Meera’s journey of love starts with Walkley award-winning photographer Brian who wins her heart despite starting off on the wrong foot. The passionate relationship that ensues, however, does not end in happily ever after as Brian succumbs to his insecurities and drives Meera away.
A heartbroken Meera returns to her parental home in India to be married off to Vikramaditya. Life, however, has other plans for her and another tragedy leads to the rebirth of Meera.

Similar to Mirabai, Meera’s soul mingles with the divine as she finds an awakening and expansion of love beyond the physical. The book continues to dwell on Meera’s spiritual unrest and inner quest for fulfilment. The characters in Nadita’s book are few but complex and interesting.
This is Nandita’s second book. Her first self-published book Missing Peace: Love, Life and Me was drawn from her personal journey, shades of which are also found in Meera Rising.
Nandita was born in Kolkatta, in India and she started writing from the age of 9. She wrote a letter to the then Prime Minister Rajiv Gandhi and was delighted to receive a response from him that inspired her to continue writing.
“As a middle child, there was certain madness in me and I considered being normal as being lifeless,” said Nandita, sharing her personal story. “I expressed my feelings through writing,” she explained.
“I cannot be Tagore nor Shakespeare, I am simply me. I write what I feel and hope that it is relatable and readable,” said Nandita, when asked what literary flavour she brings to the table.
In 2010, when Nandita was in India, she watched a 1940’s movie on Mirabai and was intrigued. She embarked on a three-year research into the life of Mirabai, curious to know everything about her. The seed for her second book was sown.
Nandita’s own story interlinks writing to therapy as she found solace in writing again after suffering a serious brain injury that led to permanent cognitive disability.
In 2011, while rock climbing with friends, Nandita fell from a height of 40 metres and fractured her skull. Her initial recovery took 9 months in rehabilitation. In 2016, she had to return to rehab after she found herself lost on Melbourne streets with no memory of who she was.


“For a few minutes, I had no idea who I was and where I was going. I looked at the phone in my hand and that triggered the return of my memory,” said Nandita, recalling the horror of her predicament. Post another lot of rehab, she continues to suffer from a blind disability along with other related complications.
According to Nandita, her psychologist Dr Joseph encouraged her to start writing again as she had given up writing during rehab and was suffering from mental health issues. Nandita is very thankful to him and the Royal Melbourne Hospital Community Services for supporting and assisting her during her long recovery.
During the recent launch of Meera Rising, hosted by Busybird Publishing at Montmorency, Nandita shared her story with family and friends and many supporters. Author-screenwriter Les (Lazarus) Zigomanis, the Publications Manager and Chief Editor at Busybird Publishing, officially launched her book.
According to Nandita, Les’s unstinting support has been very important to the development of her work. “He has been in this industry for over 20 years and I am inspired by his honest writing and defined voice. His novels Just Another Week in Suburbia, Pride, Overload are wonderful reads,” she said.
Nandita is currently finalising her third book, another story that straddles between two cultures. The plot revolves around an Indian Muslim Girl who falls in love with an Australian diplomat. They have a daughter Rosemary who is brought up in an orphanage. She grows up and returns to Melbourne to seek revenge, hence the title Rosemary’s Retribution.
Nandita is currently all set to travel to Paris ‘to interview a lot of 70-year-old French men on their take on life’ for her next project and a tale that she has always wished to tell.
Nandita’s story, like that of her protagonists, is about bouncing back. For those open to receiving guidance within the pages of her books, Nandita has one simple message for all: you need to love yourself first in order to find a higher form of love.
- Advertisement -
Share
WhatsApp
Facebook
Twitter
Linkedin
Previous articleMiracle or mirage?
Next articleYaz Mubarakai: The people’s MLA