SALMA SHAH on Glass Walls: Stories of Tolerance and Intolerance, an anthology of stories from India and Australia. 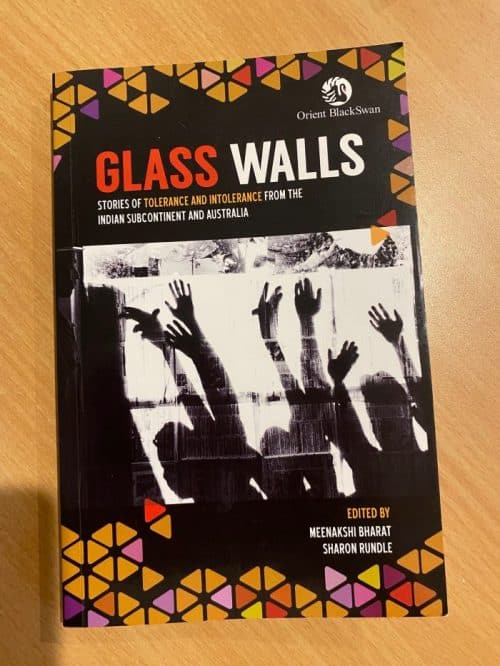 Glass Walls offers readers a compelling collection of short stories by a wonderfully diverse group of writers from Australia and the Indian subcontinent. Editors Meenakshi Bharat and Sharon Rundle have successfully compiled a series of provocative pieces of short fiction that are not just reflective of human nature and behaviour – but which can be held up as a mirror for everything that each of us are, and can be.

Each of the short stories has at its heart a core message that even in our ignorance and selfishness, there are moments of incredible self-awareness. In this awareness lies hope that our collective intolerance of others, or a distinct exclusion of those different from us, is slowly being eroded to a more enlightened perspective.

Was Washed Ashore: Of Other Worlds by Sue Parker is a wonderful example of this insight. Gilbert Tucker catches a sea creature, a fish so out of the ordinary that Gilbert hauls it ashore in the hope that perhaps there would be publicity from the catch. As Gilbert guards the fish overnight, his boredom causes him to stab the fish absent-mindedly, until a milky white fluid oozes out of the fish and it makes a soft moan.

Was there a baby fish in the sea, waiting for its mum to return? Gilbert spends the rest of the night keeping the fish drenched in the hope it would stay alive. This incident ultimately shapes him as a better man and father.

Of course, the saddest part of the story was at the end when marine specialists reveal that the fish was indeed lactating. Another story that touches the reader deeply is Absence, by Julia Mackay-Koelen. A young military mother with an absent husband writes emails to him that swing from details of humdrum family life to heartbreaking loneliness. As the story progresses, we realise the anger and frustration which appear as selfishness or neediness, is really a cry for help.

But it is only at the end of the story that we understand the depth of despair felt by the lonely mother – as this despair is the fuel that galvanises a set of actions – unspoken, but implied.  There has been much attention on the mental health of new parents, often with tragic consequences when these concerns are not addressed – that we realise that this story is not all fiction, and that the pain expressed in the emails are often the pain of the unheard.

In other stories, we meet a female Indian international student in Australia, exploited; a trans-dressing new boyfriend; a gay uncle cast out of the family; a parliamentarian feted for his speeches on multiculturalism who wouldn’t practise what he preached; a love that blossomed across the divides of religion as communal tensions raged on.

These and other tales give the thoughtful reader a nuanced view of people and their lives. They provide a perspective that on surface level is compelling and insightful, but at a deeper level, provide an opportunity for reflection and learning.

The stories of tolerance and intolerance in Glass Walls offer us optimism and leave us with a crucial message – provided we are ready to see ourselves in each of the stories. The fundamental message is that each of the characters is no different from their readers. A casual comment that demonstrates a bias, the fleeting look that instantly diminishes, an unbidden thought that betrays prejudice – each character is each of us. There is no ‘other’ here. It is ‘us’ and ‘we’. And as we progress through each story, the ‘we’ slowly becomes ‘me’ – until each story becomes about who ‘I’ am. In that instance, Glass Walls achieves its ultimate goal – to show us who we are. Implicit within that showing is the idea that there is redemption for all of us, and that enlightenment is only a thought away.