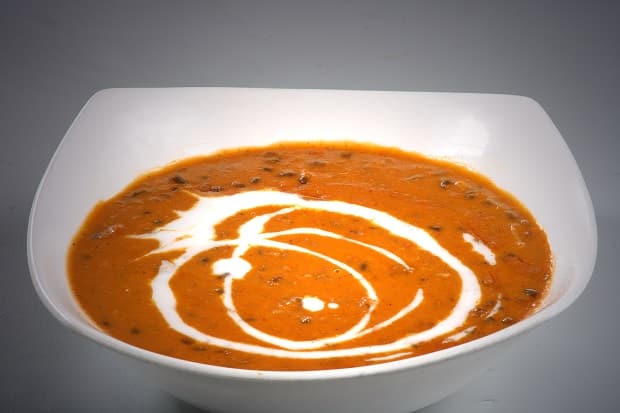 Kali dal (black lentil) is such a pretentious dal in Indian cuisine that it has to be called something grandiose. Like Maharani.

Growing up, it was the dal that only came out of the pantry when guests were over. Your parents explained that it was a “rich” or “heavy” dal, and so you should only eat it once in a while. (They were probably right).

But you always ate it when you went out. And probably still do, whenever you choose to go Indian. If you’re visiting north Indian friends, you kind of expect to see kali dal at dinner. And of course, you continue to cook it for your own guests; it is such an integral part of a fancy Indian meal.

Like caviar: in fact, it could be called the caviar of all dals. But I wouldn’t dare go so far, because I could lose you at this point, dear reader, for committing the sacrilege of equating this elegant dal with something so repulsive as, ugh, fish eggs. Before you click away from this page in protest or disgust or both, let me rephrase for you: kali dal shall remain, as it should, the queen of all dals. You know, Maharani.

Everyone has their own style of cooking kali dal, also called Ma ki dal, or Dal Makhani. Some pressure-cook. Others slow cook. Yet others devise a combination. And there are those who prefer to cook it in an open pan, simmering away for hours on the back burner.

Yet most will claim their recipe to be the most authentic. I’ve had recipes passed to me as “Taj” or “Oberoi” versions, referring to the very best of Indian hoteldom. But there are hard-core Punjabis who will say “Taj-Oberoi bhaad mein jaaye, the most genuine recipe is the one used by saddi mummy”. No doubt named after her too.

Personally, I have for some time now shied away from this hard-to-digest dish because – let’s face it – it is an un-adventurous (least risky?) item on a dinner menu. But I am becoming inclined towards it again, especially after a recent Brazilian meal in which it appeared before me as a soup, with meat and veggies added in. Meat in your kali dal, I hear you ask again in disbelief. Relax, dear reader, it was probably puy lentils or beluga beans or some such, but trust me, kali dal will work just as well… It was simply delicious. Come winter, I am going to give it a try: Soup Maharani, with crusty bread to dip in, and a side salad of greens. (Vegetarians please stay away).

Here’s another recipe I’ve chanced upon, which claims to be the real deal. This one’s from Moti Mahal, a long-standing Delhi institution, and is provided by Monish Gujral of the restaurant chain. According to Monish, his grandfather Kundan Lal Gujral, founder of the famed Moti Mahal, came up with this recipe.

Pick and clean the dals and rajmah. Add salt and rub gently with both hands; rinse with water. Soak the mixture overnight in water.

Take a utensil with a heavy base, add the drained dal mixture and double the quantity of water; cook over low heat. At the restaurant, we put it in a tandoor for a while to simmer slowly.

Stir the mixture vigorously enough to mash it.

Once the mixture thickens add milk and cook till the milk is completely absorbed.

Add the tomato puree and all spices; cook (for about 30 minutes) till grams and beans are tender.

Add butter and cook for 10 minutes.

Now add cream and stir for one to two minutes.

I first heard of this as Kali dal ki khichidi. Of course I went, what the…? A khichidi is meant to be simple and nutritious, and often for the convalescing. Isn’t kali dal way too rich for a khichidi? But this concoction turned out to be so delicious that I have since renamed it a pulao. Yes, a pulao is certainly more befitting of the dal’s ‘royal’ standing, don’t you think?

Wash dal and rice separately in several changes of water until water runs clear. Soak for about half an hour.

Pour out soaking water from dal and wash again in several changes of water until water runs clear.

Wait for chillies to darken and then introduce onions. Fry till onions are lightly browned.

Add in the drained dal and salt and stir to mix well. Add two cups of water and pressure cook to one whistle.

Turn heat off and when cool, open the lid. Stir the dal once to check, and then add in the drained rice. Mix gently and add in about ¾ cup of water. The dal should already have some water in it. Check for salt and then pressure cook on medium high to one more whistle.

Turn off heat and let cool. Open the lid and let stand for five minutes. Unlike a khichidi which is sloppy, this should look like a pulao, with rice and dal still maintaining their graininess. Fluff up with a fork.

To temper, heat oil and add red chillies. As it splutters, pour over pulao.

Serve with a raita or plain yogurt and pappadams.