“This Australia-India Comprehensive Economic Cooperation Agreement (CECA) is hard to get and very hard to land, and as a government, we are very, very keen to sign this with India,”  Minister Hawke shared with corporate and business leaders attending the AICC launch. 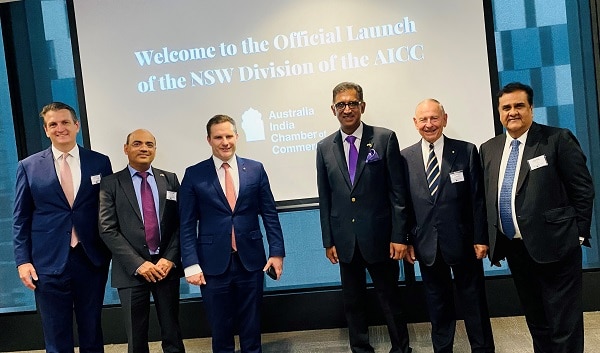 Welcoming the guests, President of the NSW Division of the AICC Maurice Newman AC spoke of the enormous opportunities that exist for business between the two countries. Reeling statistics, Mr Newman spoke about India’s impressive growth potential.

“Currently, India is the world’s second-largest steel producer, fourth largest car manufacturer, second largest smartphone manufacturer, has over 600 million smartphone and 600 million internet users, and the 2nd largest military. 36% of NASA is made up of Indian-origin scientists and India itself has the world’s fifth-biggest space agency. But more than that it is the shared beliefs of both India and Australia – of the ideals of democracy and in the rights of the individual – which makes our bonds stronger. And from these bonds come the opportunities for our two countries to work together.”

The Australia India Chamber of Commerce was established in 2019 in Victoria. Its roll-out in Australia however has been tempered by COVID.

With headquarters in Melbourne, the Founding Patron is former Premier of Victoria, Ted Baillieu AO.

Executive Director Harish Rao, speaking to Indian Link, said that the initial plan is to roll out AICC in all major states in Australia.

“We have chapters now in South Australia, ACT and New South Wales. Queensland is being launched by Minister Peter Dutton shortly and we will then launch in Western Australia. We then want the state chapters to focus on sector-wise national groups because these are the ones which are going to drive outcomes. That is the real focus. We are keen to push for a business-to-business outcome through AICC. There will be no Holi or Diwali celebrations in this Chamber of Commerce – they do have their place but our focus is purely on business,” Mr Rao said.

When queried about why, in spite of all the potential, the trade relationship has not really progressed in the last decade, Mr Rao felt that things have simply stagnated.

Commenting on the other business chambers set up to promote Australia India business, he extolled the virtues of AICC. “Others have lost focus but we are going to continue focussing on business. We are about the organisation and not about individuals,” he said