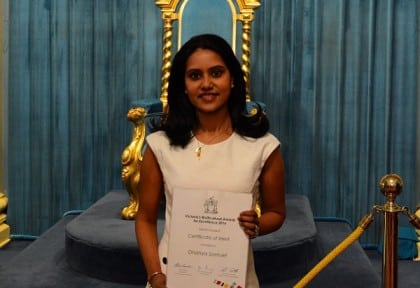 Indian Link’s Dhanya Samuel has this month won a Victorian honour in the field of multicultural media.
She won a Certificate of Merit at the Victorian Multicultural Commission’s Multicultural Awards for Excellence, in the Media category.

“It is an awesome feeling when your hard work and passion get appreciated,” Dhanya Samuel told Indian Link. “I feel on top of the world! It is also an inspiration to do better work in the future.”
Dhanya’s keen interest in local social and community issues, coupled with her insatiable love for writing, has made her one of the most read journalists in the Australian Indian community.
Her particular take on these issues in Australian society, and their impact on the large multicultural community that resides in this country, continues to increase awareness and understanding of multicultural affairs across Victoria, and indeed nationally.
“I have always chosen to write about topics and issues that are a reflection of my ideologies and hence have enjoyed writing every single feature so far. But if I were to pick my favourites from last year, it would have to be Breaking Bread Together and Tamil Feasts. Both the stories were centred around how sharing food together is perhaps the best way to celebrate your heritage yet break down barriers and differences that exist in our society.”
Her story ‘Breaking Bread Together’ was particularly well-received; it profiled a documentary series that captures the heart and soul of multicultural Australia, showcasing food as possessing an extremely powerful ability to bridge intercultural differences.
Showing sensitive understanding of social issues, her piece ‘Food for Thought’ promoted the work of a local enterprise Tamil Feasts, a unique kitchen project in East Brunswick set up to support recently settled asylum seekers. The piece had a constructive impact on the work of the CERES Environment Park who were flooded with bookings.
“There are so many stories waiting to be told and so much of work that each of us can do to bring the society together,” Dhanya observed. “Attending the awards ceremony also gave me a chance to interact with and learn about the work of others, which was truly an eye-opener.”

A great believer in the power that youth and social media holds to leading Australia forward, Dhanya is also interested in stories of young Australians following their dreams, working hard to make them come true. Through her writing, she has raised awareness of local artists and documentary makers from diverse cultural, linguistic and religious backgrounds.
Dhanya is also a prolific food writer and runs popular food blog, ‘The Spice Adventuress’. A unique creative voice, her blog was nominated amongst the Top 30 Australian food blogs of 2015. Her work was also published in Bank of Melbourne’s crowdsourced cookbook which celebrated the food diversity of Victoria.
The philosophy behind her food-based writing is to show how food can be used as a medium to bridge geographical, cultural, social and religious differences.
Dhanya’s food columns have graced many of Indian Link’s issues, seeking to dispel the myths surrounding Indian food, encouraging our readers to use local Australian ingredients in traditional Indian dishes, and putting an Indian spin on several Oz favourites like the Vegemite chicken or curried kangaroo!


Where does her love of food – and food writing – come from?
“My mother is an excellent cook and it was as her little assistant that I began to explore different flavours. Spices intrigue me and I love to use them liberally in my cooking; cherishing the ancient flavours and techniques but embracing new ones too. But my blog, ‘The Spice Adventuress’ was a result of my love for writing as well as storytelling. Every dish has a story and an inherent ability to bring back memories and make us happy from within. I love to discover these stories and share them with the world. It helps us understand other cultures and religions which in turn makes us more accepting of the differences.”
Dhanya continued, “The blog is also a space to showcase regional Indian cooking to the global palate. India has such a strong culinary heritage and I believe that most of it still remains a mystery to the world. And I love to combine this knowledge with the amazing produce that Australia has to offer, coming up with my signature Indo Australian recipes. The best of both worlds!”
Dhanya is also a keen participant in her local council activities in Dandenong and uses her skills in writing to promote the council’s work. Her community-mindedness also finds expression in her voluntary work with new migrants, guiding them through the settlement process in their new home and helping them feel welcome.
Keep up the good work, Dhanya.
- Advertisement -
Share
WhatsApp
Facebook
Twitter
Linkedin
Previous articleFestive sweets!
Next articleYoung journalist shows great promise