This year marks the centenary of the ANZAC troops landing at Gallipoli in Turkey. The acronym ANZAC, which stands for Australian and New Zealand Army Corps, was first coined in 1915 when troops from the two nations were training in Egypt. The term ANZAC was then applied to all Australian and New Zealand soldiers serving in World War I, but is especially associated with the battle at Gallipoli on 25 April, 1915.

Despite their symbolism as a common link to our friendly rival New Zealand, the history of Anzac biscuits is highly contested.

The original biscuits did not have the sweet flavour we associate with Anzac biscuits today. The first ‘Anzac tiles’ or ‘Anzac wafers’ were staple army biscuits eaten by soldiers as a substitute for bread. Any food parcels sent to men fighting on the front had to be carried long distances on merchant navy ships, and fresh food and water supplies were difficult to guarantee. These very hard biscuits were introduced using nutritional ingredients that would last the distance. 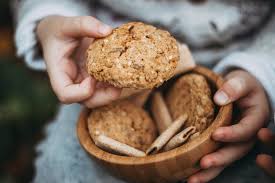 The Australian War Memorial holds in its collection a range of such hardtack biscuits from World War I. They were so durable that soldiers used them for a variety of non-culinary purposes including writing messages to send to loved ones or as paint canvases and photo frames!

The origins of the sweet Anzac biscuit are harder to discern. A recipe for “Anzac Biscuits” appeared in the War Chest Cookery Book (1917) but was for a different type of biscuit altogether. The same publication included a type of today’s Anzac biscuit, but called Rolled Oats Biscuits.

One story is that during the war, concerned wives, mothers and girlfriends made biscuits, based on a Scottish recipe using rolled oats, to sell at local fetes and galas to raise funds to support the troops. They were first called Soldiers’ Biscuits, but after the landing on Gallipoli, they were renamed Anzac Biscuits. Another story is the biscuits became a suitable inclusion in comfort parcels sent overseas due to their long shelf life.

The most common form of today’s Anzac biscuit recipes began appearing in cookbooks in the 1920s, with coconut appearing as an optional ingredient from around 1927. 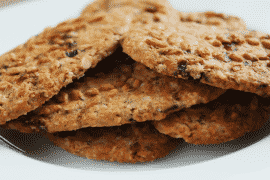 The Country Women’s Association of New South Wales provides two recipes for Anzac biscuits, one without coconut and one including coconut. Both are printed here for you to try at home!

Combine oats, sifted flour, sugar and coconut.
Combine butter and golden syrup, stir over gentle heat until melted.
Mix the baking soda with the boiling water and add to melted butter mixture.
Stir into the dry ingredients.
Place teaspoons full of mixture onto lightly greased oven trays; allowing room for spreading.
Cook in a slow oven for 20 minutes at 150 C / 300 F.
Loosen while warm then cool on trays.
Makes about 30 biscuits.

Put rolled oats and flour into bowl.
Melt butter and sugar together and mix well with flour and oats.
Dissolve syrup in water and stir in soda till it foams well.
Add to other ingredients and mix well.
Place spoonfuls of mixture onto greased oven trays, leaving room for them to spread.
Bake at 100 degrees Celsius for 20 minutes.
Put onto a cooling tray to cool completely before packing away.
Makes about 30.