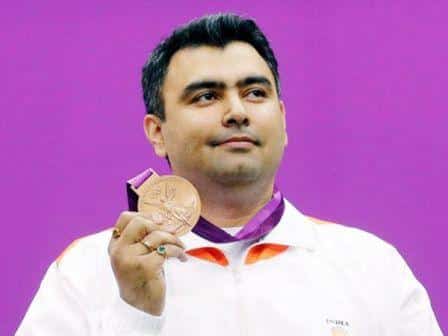 India’s rifle shooter Gagan Narang clinched the bronze medal in the men’s 10-metre air rifle event of the 2012 London Olympics to give India its first medal.

Narang’s illustrious compatriot and defending champion Abhinav Bindra failed to qualify for the final round at Royal Artillery Barracks in London.

Bindra’s unceremonious elimination at the qualification stage came as a heartbreak for India in the same manner as Australia’s men’s 4 x 100 relay debacle at the swimming pool. However, the 29-year-old Narang of Hyderabad, participating in his third Games, made up for his compatriot’s luckless show.
This is the third time in row that Indian shooters have won medals at the Olympics. Double trap shooter Rajyavardhan Singh Rathore won the silver in 2004, Bindra gave India a historic gold in Beijing, and now Narang has bagged a bronze in London.
Bindra, India’s only individual Olympic gold medallist, failed to qualify as he finished 16th out of 47 contestants.
Narang had missed the final round in Beijing Games on a countback.
This time round, not only defending champ Bindra but also former Olympic champion and Beijing Games silver medallist Zhu Qinan of China failed to qualify for the final round.

Gagan, who is also slated to take part in the 50m rifle 3-position and 50m rifle prone events, was always considered a big hope alongside Bindra after he shot four golds in the Delhi Commonwealth Games. He had given enough indications of his class in a pre-Olympics event in Germany’s Hannover by scoring 704.3 – that was higher than the world record of 703.1 set by Thomas Farnik of Austria in the 2006 World Cup.

Meanwhile, congratulations are pouring in from all over for Gagan. Union Sports Minister Ajay Maken said his bronze will inspire other Indian athletes to do well in the sporting extravaganza. He was speaking with reporters outside the Royal Artillery Barracks when Narang shot an overall score of 701.1 to finish third.
“It would have been even better if Abhinav Bindra stood on the podium as well,” lamented the minister.

The Haryana government announced a reward of Rs. One crore for Narang.

Even though Narang does not belong to Haryana, he has been given the reward under the category of sportspersons from the state as his family roots are from the northern state’s Panipat town
Chief Minister Bhupinder Singh Hooda said Narang has brought laurels to the state and the country.
The chief minister said players from Haryana winning a gold medal in the Olympics would get Rs.2.5 crore, silver medallists Rs.1.5 crore and those winning bronze Rs.one crore.
(As the Haryana government doled out cash rewards, cars, mobiles and other goodies for medal-winning players from the state in the CWG and Asian Games (2010), Narang, who won four gold medals in shooting in Delhi, walked away with a cash bonanza of Rs.37.5 lakh. This was the highest prize money among all the 35 players honoured at that time.
Each CWG gold medal winner had received Rs.15 lakh from the Haryana government. Those winning more than one gold medal got an additional Rs.7.5 lakh for every medal. Narang and all other gold medallists also got one Maruti SX-4 car priced around Rs.800,000, and a Nokia mobile phone).

After hockey, shooting is India’s most successful Olympic sport

Shooting became the second sport after men’s hockey to fetch India more than two medals down the years at the Olympics, with the success in the discipline having come from three back-to-back games since Athens in 2004.
Narang’s success has added to India’s less than impressive medal count – which now stands at 21 comprising nine golds, four silvers and eight bronzes – in Olympics history.
Hockey alone has provided 11 metals (8 gold, 1 silver and two bronze medals). Apart from the three in shooting, the Indians have got two each in athletics and wrestling and one apiece from weightlifting, tennis and boxing.

Beyond 9 to 5: These women built their beauty careers working...

A sense of entitlement