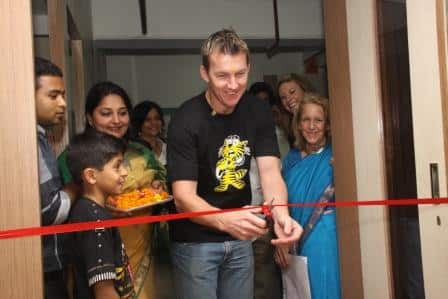 Australian cricket star Brett Lee inaugurated in early May his Music Therapy Academy as one of the core initiatives of his charity foundation “Mewsic” in India.

Lee instituted the foundation in 2011 to help the sick with music therapy, following in the footsteps of his senior, former Australian captain Steve Waugh whose foundation supports underprivileged children and the girl child in India. Lee’s foundation targets the underprivileged section of the society too.

The academy set up in partnership with a UK-based non-profit organisation, Music Therapy Trust, will train Indian musicians to make a difference in the lives of children affected by trauma, illness or multiple psychosocial or cognitive challenges by offering an international post-graduate diploma in clinical music therapy. The course will be led by music therapist Lucanne Magill, who has moved to India from the US to train students.

The academy has begun with five Indians and two Nepalese resident students. Located in the Action For Autism’s National Centre for Autism in Jasola Vihar in the capital, the academy will benefit children with autism who attend the centre by enhancing their lives by enabling them to behave manageably with members at home, a spokesperson for the centre said.

“Music therapy was an established health profession in which music is used within a therapeutic relationship to address physical, emotional cognitive and social needs of individual who are marginalised or who are facing difficulties life challenges,” therapist Magill said.

“Our clinical music therapy is a very personalised approach in which we assess the specific needs of the patients aimed at improving their quality of life. The five students whom we have begun to train in our maiden post-graduate program are all talented musicians, but not full-time. One of them is a psychologist who will use the training in clinical therapy. A banker, who is an amateur musician, wants to be a full-time music therapist after training. They will be taught to use music for healing,” Magill told IANS.

Besides the post-grad diploma, the academy will offer clinical services as well, Magill said. She said “sometimes children begin to speak of their trauma after exposure to music”.

“The music can be improvised like beats of drums, vocal songs and even classical music, both Indian and world. Cancer patients sometime like to listen to songs they know because it eases pain… it can be the only healing process,” Magill said.

Research in music therapy supports its “effectiveness in many areas like overall physical rehabilitation and facilitating movement, increasing people’s motivation to become engaged in their treatment, providing emotional support for clients and their families and providing an outlet for expression of feelings”, she said.

Describing his new training program as a pioneering initiative in India, Brett Lee said, “Clinical music therapy is widely used in hospitals, NGOs and on a one-on-one therapeutic basis across the world.”

“Music is widely undervalued as a powerful tool to help people overcome trauma they may have experienced, deal with disabilities and better cope, express themselves and respond to treatment when suffering from physical and psychological ailments,” he added.

Emily Harrison, the executive director of the Innovaid Advisory Services which manages Lee’s Mewsic Foundation, told IANS: “The foundation works with children at Bal Sahyog Orphanage in Connaught Place. Our music therapists go there and conduct music therapy workshops for the children and their families under the program Songs of Hope.”

“It is my hope to see many more of these academies across India to train Indian musicians to use their talent to transform lives of those less privileged,” Lee said.

While most people in India love Brett as a cricketer, they also know him as a singer, thanks to a duet with Asha Bhosle on her Asha and Friends album.

Lee, who plays the guitar, the piano and is a member of the band White Shoe Theory, said to much applause, “Music has made a big impact on my life and so has India!”

A walk-through the land of fire