The mainstream newspaper responded to the backlash by defending the cartoon. 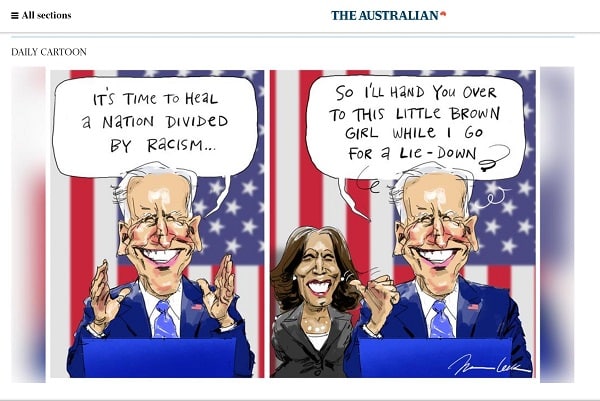 The Australian newspaper is refusing to take down a cartoon published earlier today that is overtly and obscenely discriminatory. The caricature by Johannes Leak has raised eyebrows for its clearly racist and misogynistic tone.

The racist cartoon has been condemned by many members of parliament, journalists and writers alike.

Ketan Joshi, a science writer and University of Sydney alumni slammed the mainstream daily newspaper in a tweet.

Here’s your little reminder of how ludicrously racist Australian commercial media are. This is in the country’s only national daily newspaper: pic.twitter.com/7oN7bjRWLO

In the same thread of tweets, he added that quotes from Biden’s speech were twisted and taken out of context by The Australian to produce the discriminatory cartoon.

The Democrat is clearly referring to children of colour rather than his running mate, Ms Harris.

This morning, little girls woke up across this nation — especially Black and Brown girls who so often may feel overlooked and undervalued in our society — potentially seeing themselves in a new way: As the stuff of Presidents and Vice Presidents.

Chris Dore, editor-in-chief of The Australian has been reported as saying “Johannes was quoting Biden’s words”, and referred to Mr Biden’s recent tweet.

The Shadow Minister for Multicultural Affairs Andrew Giles called the cartoon “offensive” and “racist”. He also called for a national anti-racism strategy to drive out discriminatory practices from Australia.

This morning in the Australian newspaper there’s a cartoon depicting Joe Biden and Kamala Harris.

There should be no place for this in Australia, it diminishes us all.

It’s time for zero tolerance of racism, and a national anti-racism strategy.

Labor MP Andrew Leigh demanded that The Australian issue an apology for publishing the racist cartoon.

Racism has no place in Australian public life. The Australian should pull today’s offensive cartoon off their website, and issue an immediate apology. #auspol

ABC reporter Matt Bevan strictly denounced the artist. In the same thread said that if this were America, there would be protesting in the streets and Leaks would be fired.

If this was published in an American newspaper there would be street protests demanding he be fired. And he would be.

We at Indian Link deeply condemn the actions taken by The Australian. We hope mainstream media will be more aware of such discriminatory practices in the future and actively remain anti-racist.