Australia recently released a report on its economic strategy for India recommending that the latter should be put into its top three export markets and made the third largest destination in Asia for the country’s outward investment. The report titled ‘An India Economic Strategy to 2035’ –  authored by former Australian High Commissioner to India Peter Varghese – was welcomed by Australian Prime Minister Malcolm Turnbull.

The report said it would see Australian exports to India grow from $14.9 billion in 2017 to around $45 billion in the next 20 years, and outward Australian investment to India rise from $10.3 billion to over the $100 billion mark, reflecting a transformational expansion of the relationship. The report through its 90 recommendations noted that the opportunities, however, would not come down easily. The government would require a sharper national focus; and that patience, perspective and preparation is needed to engage with India. 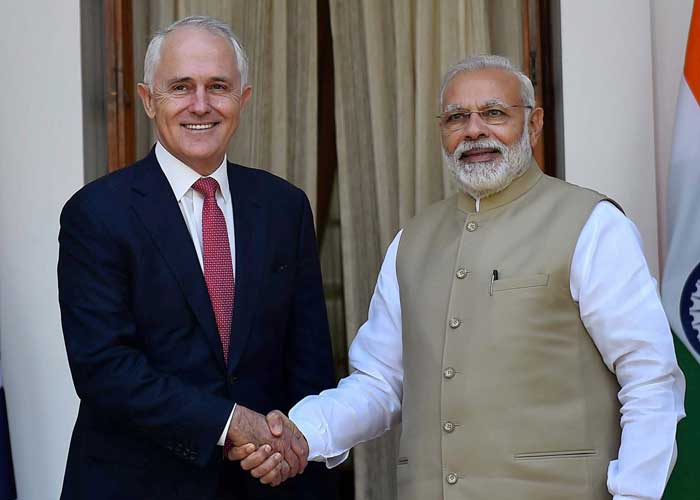 The report identifies 10 sectors and 10 states in an evolving Indian market where Australia has competitive advantages where it should focus efforts. These are divided into a flagship sector (education), three lead sectors (agribusiness, resources, and tourism) and six promising sectors (energy, health, financial services, infrastructure, sport, science and innovation).

The Indian diaspora in Australia is expected to play a larger role in building these economic linkages, highlighting the importance of the largely prosperous 700,000-strong Indian-origin population here. The focus on states reflects that India is not seen as a single economy but as an aggregation of very different state economies, each growing at different rates, driven by different strengths, led in different ways and likely to continue to be uneven in their progress.

India: State of the economy

Today India is the fastest growing major economy in the world and offers immense opportunities for business and economic partnership. Australia’s new India economic strategy shows how India’s growing economic weight makes it an unavoidable economic partner, despite the challenges in navigating its market. It is not surprising therefore that Australia wants to press the reboot button in this relationship.

Many countries are reformulating their economic and foreign policies to engage India. India’s scale is extraordinary. By 2024, India would have overtaken China as the world’s most populous country. India has the world’s largest youth population, but isn’t yet fully capturing this potential demographic dividend – over 30% of India’s youth are NEETs (not in employment, education or training), according to the OECD. 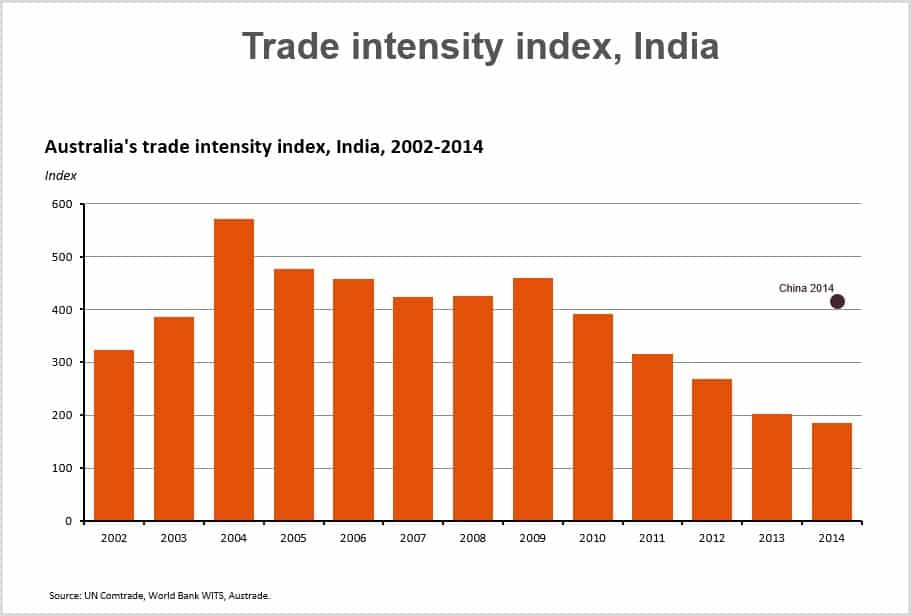 By 2025, one-fifth of the world’s working age population will be Indian. By 2030 there will be over 850 million internet users in India. By 2035, India’s five largest cities will have economies of comparable size to middle income countries today.

Over the past decade and a half, India’s economic growth, its appetite for resources, energy demand, skill development, technical know-how and investment have made it an important trade partner and export destination for Australia. There is no market over the next 20 years, which offers more growth opportunities for Australian business than India. The International Monetary Fund’s World Economic Outlook reports that “the Indian economy is expected to grow at an annual rate of 7.4% in 2018 and 7.8% in 2019, lifted by strong private consumption, structural reforms and implementation of the national goods and services tax”.

Australia’s India Economic Strategy report acknowledges that though India is already in the first tier of Australia’s diplomatic relations, the economic relationship is stuck in the second tier.

Bilateral merchandise trade was only $19 billion in 2015-16 (compared with $150 billion for China), making India Australia’s 10th largest trading partner. Many Australian resource companies keen to invest in India have found themselves locked out of the market. Merchandise trade has declined by 50% in value since 2010.

Australia is ranked 33rd in countries to whom India exports, and India is no longer in Australia’s top-ten two-way trade partners. Investment is thin and largely one-way, from India to Australia. Australian firms remain uneasy about doing business in India, their biggest concerns being corruption, red tape, enforcement of contracts, and the cost of doing business.

For many, the remedy to declining trade and investment was a preferential trade agreement, such as those Australia has with Japan, South Korea and China. But this has not been successful with India.

Despite years of negotiation, a Comprehensive Economic Co-operation Agreement remains elusive. The negotiation for the CECA between India and Australia, was started in 2011 to provide fillip to trade and investments between the countries. Several rounds of negotiations have been completed for liberalising trade and services regime, besides removing non-tariff barriers and encouraging investments.

But both the sides have yet to resolve issues pertaining to goods and services. There have been nine rounds of negotiations so far on CECA. The last round was held in September 2015.

Senior Economist Prof Arun Kumar, retired from Jawaharlal Nehru University’s Centre for Economic Studies and Planning and currently the Malcolm Adisheshiah Chair Professor at Institute of Social Sciences, is not surprised that CECA has stalled. He told Indian Link, “Such an Agreement is always a challenge between countries that are at different levels of development, and the gap between India and Australia is substantial. Given the poverty levels and backwardness, India has to be careful about what it opens up to foreign trade and investment. Already there is massive under employment among youth and with more imports and setting up of high technology industries, employment would suffer even more. Indian agriculture is in a crisis and more imports of agricultural products would pose severe problems for the farmers who are agitating in a big way across the country.”

Giving more details about CECA, Prof Harsh V Pant, Professor of International Relations at King’s College London told Indian Link, “On CECA, India is not agreeable to Australia’s demands to reduce/eliminate duties on wine, dairy, pharmaceuticals, fresh fruits and meat, while Australia continues to drag its feet on India’s demands to eliminate duties on textiles, automobile components and fresh fruits as well as giving India greater market access in service. Now the two are looking at RCEP before moving ahead with CECA.”

The economic strategy paper comes soon after the foreign policy white paper by the Australian government, which made a big space for relations with India, pushing India to among Australia’s top strategic partnerships.

India and Australia are both countries situated in the most dynamic region on the planet, where the centre of economic and strategic gravity is shifting to the Indo-Pacific.

These common concerns have strengthened the need for greater maritime cooperation between the two nations, and the two have started conducting joint naval combat exercises. As leading powers in the Indian Ocean region, the two countries are also at the helm of Indian Ocean Regional Association (IORA) – a formal grouping of the Indian Ocean Littoral States.

Australia is also a permanent member of the Indian Ocean Naval Symposium which brings together the local navies of Indian Ocean region. Clearly, Australia has also come to look at India as a potential partner in promoting regional security and stability. This led to upgradation of bilateral relationship between the two nations to a ‘Strategic Partnership’, including a Joint Declaration on Security Cooperation in 2009 and the Framework for Security Co-operation agreed in 2014.

Australia’s interest in developing a stronger economic relationship with India comes at a time when it’s is increasingly aware of India’s economic exposure and potential vulnerability to China. It also comes at a time when the Australian government acknowledges the need to “catch up,” so to speak, in India. Former Secretary of the Department of Foreign Affairs and Trade (and former High Commissioner to India) Peter Varghese, notes in his introduction to the strategy:

“Timing has always been a challenge in Australia’s relationship with India… Today the risk is that we are not moving fast enough and Australia might fall behind as other countries accord India a higher priority. We cannot afford to lose momentum or to assume that the logic of complementary interests will be enough to take the economic relationship to the level it needs to rise.”

Tim Harcourt, Senior Economist at the University of New South Wales and a former Chief Economist of the Australian Trade Commission (Austrade) told Indian Link that obstacles shouldn’t stop Australia from exploring the Indian market. “India is notorious for its red tape,” he concedes, “but more businesses are finding it can be worth it to settle in for a long innings. South Australia has engaged in water policy through the state’s ties to Rajasthan (helping Hydro-dis), huge human capital, Make in India and Digital India programme is making things easier, India is more entrepreneurial and proactive today.”

Prof Arun Kumar notes, “India is now the 5th largest economy in the world so it is important to all countries in the world. India lacks technology so it gives Australia a chance to increase high technology trade with India. Australia would also like to balance trade with China by diversifying.”

The India Economic Strategy report states categorically, “India is too complicated for its growth story to be linear. Its economic progress will be uneven and incremental, constrained by the political compromises demanded by a diverse democratic federation, held back by thinly resourced institutions, burdened by a bureaucracy too susceptible to arbitrary interference, dented by endemic corruption and shaped by a political tradition which puts much greater faith in government intervention than the efficiency of markets. There is no point lamenting these constraints. They are wired into the Indian experience. We need to understand them but also acknowledge that they are changing and look beyond them to grasp the significance of the opportunities created by a growing Indian economy. India needs to be understood on its own terms. It will always march to its own tune.”

The Australia-India bilateral relationship has been largely a case of “one step forward, two steps back”. A positive shift in relations has been observed since the visit of Indian Prime Minister Narendra Modi to Australia in Nov 2014 after a gap of 28 years. Modi in his speech to the Joint Sitting of Parliament in Canberra then, had famously said that Australia was no longer at ‘the periphery of India’s vision but at the centre of its thoughts.’

The opportunity as well as the challenge is that the two nations are at very different levels of development, so the interests can either converge or diverge. The future must be woven around the three pillars, which are economic relationship, geo strategic congruence and people-to-people ties. The glue that binds all is sustained momentum.

As summer begins, be careful when going out for a swim