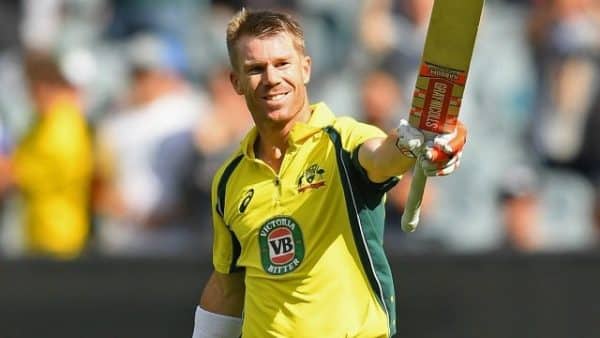 Australia dominated with both bat and ball to defeat India by 21 runs in the fourth One-Day International (ODI) at the M. Chinnaswamy Stadium in Bengaluru.

The hosts have already won the five-match series 3-1.

Electing to bat, Australia produced a challenging total of 334/5 in their 50 overs thanks to a 231-run opening stand by David Warner and Aaron Finch.

Warner top scored for the visitors with 124 runs off 119 deliveries, hitting 12 boundaries and four sixes along the way.

The in-form Finch, who had scored a century in the last match, was unlucky to miss out on on another three-digit score. He fell to fast bowler Umesh Yadav on 94, having smashed 10 boundaries and three sixes during his 96-ball stay in the middle.

In reply, the hosts could only manage 313/8 despite half-centuries from Kedar Jadhav, Rohit Sharma and Ajinkya Rahane.

The loss saw India skipper Virat Kohli fail in his bid to register the longest winning spree by an Indian captain.

He had equalled previous incumbent Mahendra Singh Dhoni’s record run of nine consecutive victories when the hosts won the last encounter at Indore.

Pacer Kane Richardson played a crucial role for the Australians, picking up the key wickets of Rahane, Jadhav and the dangerous Dhoni.

Chasing a challenging target, India were off to a good start with Sharma and Rahane putting up an opening stand of 106 runs.

Sharma was in excellent form, with five sixes and a boundary dotting his 55-ball innings which yielded 65 runs.

Rahane gave him good support from the other end, scoring 53 runs off 66 balls with six boundaries and a hit into the stands.

The Australian bowlers tasted their first success Rahane fell to a slower, cross-seam delivery from Richardson.

The Mumbai batsman was outfoxed by the lack of pace even as he stepped out of his crease to attempt another big hit, only to find Finch at the long-on boundary.

Sharma was run out a short while later after being involved in a horrendous bit of mix up with Kohli. The Indian skipper was bowled a couple of overs later Nathan Coulter-Nile as the visitors gained the upper hand.

Jadhav and Hardik Pandya tried to stage a fightback, adding 78 runs between them off 77 deliveries.

Leg-spinner Adam Zampa broke the partnership when Pandya, who scored 41 runs off 40 deliveries, was caught at long-off by Warner while trying to hit the ball out of the park.

Jadhav, who top scored for the hosts with 67 runs, kept Indian hopes alive with 61-run stand with Manish Pandey which came off 51 balls.

Jadhav, whose spirited 69-ball knock included seven hits to the fence and a six, was dismissed when he misread a slow leg-cutter by Richardson with Finch latching on to the ball at long-off.

That brought old war horse Dhoni to the middle to loud cheers from the partisan home crowd.

Richardson however, forced the crowd into stunned silence when Dhoni was bowled in an attempt to accelrate the scoring rate. That virtually put an end to the hosts’ chances and the result was only a formality from there on.

Earlier, after opening batsmen Warner and Finch guided Australia to a big total with the former, playing his 100th ODI, striking his 14th century.

India pulled things under control after the opening partnership ended in the 35th over but Peter Handscomb’s 43 off 30 balls put the visitors in command.

After Australian captain Steven Smith won the toss and elected to bat first, Warner and Finch were comfortable against Yadav and Shami and the left-right Australian combination took the attack to the opposition straightaway.

Finch, who had hammered his eighth century in the third ODI, looked to have resumed from where he left off in Indore.

His backfoot play was quite impressive and mostly presented a straighter bat, while Warner, who was at his usual aggressive best, went for his strokes all around the park. By the end of 16 overs, Australia had crossed the three-figure mark.

Even the spinners, Patel and Yuzvendra Chahal, were not spared from the Warner-Finch assault.

Warner brought all his repertoire of strokes and the spinners even faced the wrath of the left-hander swashbuckling switch-hitter.

Their partnership threatened to take the match away from India as Warner went for clean hitting. Moving his front leg away, his hits over the mid-wicket fence off spinners were a treat to watch.

A cracking cut towards the backward point in the fourth ball of the 31st over bowled by Jadhav brought Warner’s century in 103 deliveries.

After completing his century, Warner stepped up a gear as he whacked Patel for a six and two fours in the 34th over.

In the following over, Jadhav provided relief to the Indian camp by dismissing Warner when the batsman offered a catch to Axar at long-on — and Australia were at 231/1.

Soon after Warner’s wicket, Finch too fell, giving a straight catch to Pandya at mid-on off the bowling of Yadav. Australia witnessed another torrid time when captain Steven Smith (3) too was accounted for by Yadav, with the visitors at 236/3 in 37.1 overs.

Afterwards, Handscomb and Travis Head (29) saw off the bad time and put up a partnership of 65 runs to avert a late batting order collapse.

Right-armer Yadav picked up both of them later but their partnership allowed Australia to finish strongly.