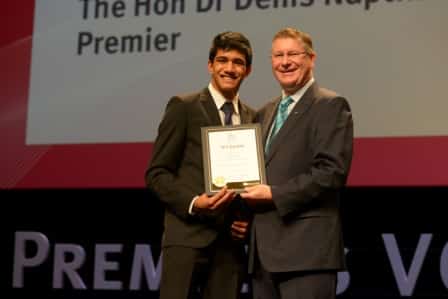 Every year, top performing students are felicitated for their outstanding academic achievements in the Victorian Certificate of Education (VCE). In a ceremony held on June 5 at the Melbourne Convention and Exhibition Centre at South Wharf, 286 students were honoured at the 2013 Premier’s VCE Awards. Premier Denis Napthine congratulated the students for performing at the very highest levels in VCE in 2012.

“Completing VCE is no small feat, but doing so with a top score is a tremendous achievement,” Dr Napthine said.

“Today is a wonderful occasion to celebrate these students, who are an inspiration to their peers, schools and communities. I wish them all the very best on the next exciting stage of their life journey,” he added.

There was an air of anticipation and excitement at the event, as Melbourne’s best and brightest waited for their turn up on stage. Dr Napthine said the breadth of talent on display at the Awards was good news for the state’s future. “If these students are Victoria’s best and brightest, then we are in very safe hands indeed,” he added.

Among the winners was Varun Peri, a student from Melbourne High School, who received a perfect ATAR score of 99.95, for which he received the Top All Round High Achiever Award. “I was thrilled with the Award, its great to be recognized for the achievement, it made the effort worth it,” said Varun. “The support from my family and teachers was a big contributor to my success,” he added.

For Varun, Year 12 was tough, with much of his time spent in studying and preparing for the exams. His subjects were Physics, Chemistry, Mathematical Methods, Specialist Maths and English, along with Biology, which he completed in Year 11.

“When I received my ATAR scores and realized I had scored a higher than expected, I was thrilled and relieved. It was an unexpected surprise, but a fantastic one,” he revealed. Varun admits that he paced himself with studying, working consistently on each subject and then speeding up prior to the exam. He also took time out for sporting leisure activities, and fortunately for this young man, his parents put no pressure on him to study or to achieve beyond his potential. Varun has accepted a scholarship to study a Bachelor of Science degree from Melbourne University, and he intends following a career path in either Medicine or Engineering.

Varun makes use of his academic talents with VCE and IB tutoring, and is now looking forward to two weeks of training before becoming a volunteer teacher at the Adult Migrant English Service (AMES), where he will teach English to newly arrived migrants.

Among the other winners was Amarjit Batra from Camberwell Grammar School, who scored an ATAR of 98.75 and won the award for IT Applications; and Srishti Dhir from The Mac.Robertson Girls High School with a study score of 50 who won the award for Environmental Sciences.

What kind of parent are you?