In a whirl of glitter and glitz, dancers at SIJDM display their prowess, says PREETI JABBAL 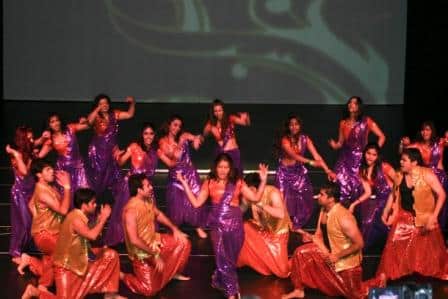 If there is any Bollywood dance show in Melbourne that is guaranteed to get the audience hollering and hooting with cheers of appreciation, it has to be a Shiamak Funk. The sheer energy and raw power demonstrated by students and instructors in Shiamak’s fun, electrifying show is quite entertaining. This rather stimulating show has it all – ecstatic dancing, music that lifts the spirits and a stage that is alive with movement.

With a marathon of 46 dances performed by students from seven locations across Melbourne, Shiamak’s sixth annual Winter Funk, held recently at the National Theatre in St. Kilda, certainly lived up to the hype. The show was a culmination of the efforts of students from two batches of SIJDM. The end of term performance was a highlight for every student and the audience filled with family and friends was a fantastic catalyst for them. They were all there, the camera wielding proud parents, the noisy shrieking teenagers, the supportive friends and the totally gobsmacked toddlers, each one enthusiastically applauding for their own.

Stand out performances were executed on popular Indian film songs like Saiyaan (Agneepath), Ishq Sufiana (The Dirty Picture) and Chikni Chameli (Agneepath).  A pure jazz performance by the Special Potential Dance Group (selected by Shiamak Davar for their dancing skills) was very well received. The colourful festivals of India offered a great visual experience, while the exuberance of the finale by the show kids on the song Deva Sri Ganesha sent the audience into catharsis. The entire performance was one beautiful spectacle after another, all quite entertaining, as witnessed by the enthusiastic responses from the audience.

The dancing melded hip-hop, jazz to Indian classical and the participants wore everything from saris to hot pants. Inspired by the work of renowned choreographer Shiamak Davar, the SIJDM instructors successfully negotiated the balance between tradition and eclecticism of dance genres. It turned out to be a rather long concert; however for anyone that follows dance and appreciates the art form, the show was enjoyable in many ways. For anyone who didn’t particularly know anything about dance, the Shiamak Winter Funk 2012 proved to be an opportunity to find out what talented people can do in Melbourne.