We were snorkelling at Pantai Merah, a beautiful pink beach tinged with crushed coral, when our guide Jennifer announced that Komodo dragons are just as agile in water as they are on land. 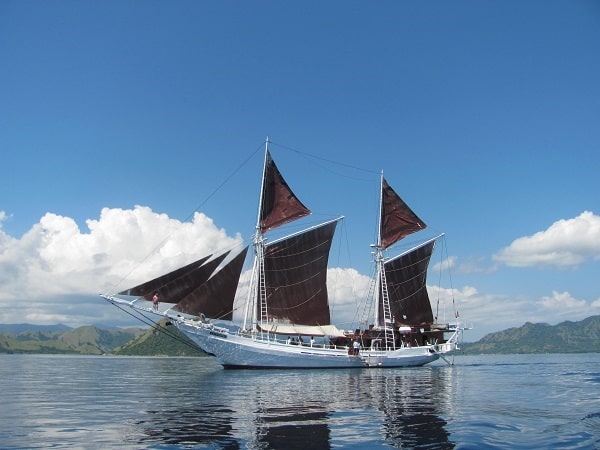 Our adventure had begun in Bali where I joined six other passengers onboard the Katharina, a traditional phinisi handcrafted from ironwood, from where we departed – cutting through the sea eastwards across the Lombok Strait. For the next nine days we would wake early at sunrise to strong Indonesian coffee, followed by breakfast that included fresh tropical fruit and cashew nut muesli, before commencing our excursions on land and underwater.

With my mask on I’d seen parrot fish, angel fish and bright yellow butterfly fish, along with leathery turtles, their dorsal fins paddling, and vibrant multi-coloured coral. As the blue water lapped against the Katharina’s sides, pods of dolphins would playfully dart beneath then race in front.

More dramatic was a close up encounter with the Komodo dragon. Growing up to three metres in length, with a speed of 20kms per hour, a dragon has razor-sharp claws, a powerful tail and saw-like teeth. Our ranger guide, Hakim lifted his forked wooden stick, our only defence against snapping jaws, before strutting confidently towards a grove of palm trees, probing the underbrush periodically with his stick.

Under a tamarind tree we saw a female Komodo dragon sprawled out, her forked yellow tongue slithering to and fro, her tail swinging from side to side. Slowly, she kicked her rear legs and swaggered away. Huddled together we continued bravely on a hike through shady gullies to savannah covered hills, climbing to a viewpoint overlooking the turquoise bay below. Hakim pointed to the spot where Baron Rudolf Von Reding Biberegg, an elderly Swiss tourist vanished in 1974, leaving only his hat, binoculars and shoe behind.

An endangered species found only on five of the islands in the Nusa Tenggara archipelago, predominantly on Rinca and Komodo islands, the dragons number several thousand.

One of the world’s most ruthless predators, a relic of the dinosaurs, their septic saliva infects and eventually kills their prey. But in the coolness of the early morning, their movements were slow and after two days of viewing them our fear turned to caution, one juvenile dragon having entered the ranger’s office only recently.

Komodo National Park is World Heritage listed with some of the richest land and marine life on the planet, and while the dragons take centre stage, underwater is no less exhilarating. Flipping backwards from our tender boat to snorkel I saw beneath me two manta rays then seven more as they glided gracefully by.

We also visited Bajo or sea gypsy villages along the coastline of Sumbawa including Pulau Bungin. Historically, Indonesia had many nomadic tribes, referred to as sea gypsies, who travelled and lived in boats. We were treated to a traditional dance performance by enthusiastic school children and many in the village accompanied us as we walked around.

At Wera, a settlement of Bugis, renowned shipbuilders originally from Sulawesi, were working overtime to complete a massive cargo boat they had been crafting by hand since 2009. Made from ironwood, it was due to be launched the following week with people from neighbouring villages expected to attend the celebration.  The women were equally busy, cooking in preparation for a wedding, making sweet treats including deliciously crunchy palm sugar toffee that they invited us to try.

On the final night of the cruise, on a deserted island, we enjoyed a beach barbeque, lit a large bonfire and, under a night sky filled with the stars of the Southern Cross, sang songs and danced with the crew.

Our journey ended at the western tip of Flores in the port town of Labuan Bajo, meaning port of the Bajo. A ramshackle town of considerable charm, the dusty main street is lined with funky cafés, dive shops and restaurants, the hilltop and waterfront scattered with brightly painted houses, hostels and quaint boutique hotels, while boats lie at anchor in the picturesque harbour. With twenty plus world class dive sites nearby, travellers come from all over the world, mainly from Europe, creating a divergent mix of accents with Italian and German dominating.

While in Labuan Bajo, I hiked to a cave, swam at a pretty pink sand beach, bought hand woven textiles from the local market and visited the village of Melo to see the Caci Dance, a traditional combat performance between two men, one using a whip the other a rattan shield. The upper body remains bare with a belt of bells jangling from the hips and strung from the ankles creating a mesmerising rhythmic sound accompanied by drum and gong instruments.

When a Portuguese expedition reached the island of Flores in the early 16th century, they named it ‘Cabo das Flores,’ or ‘Cape of Flowers.’ Flores and the vast expanse of small islands and coral reefs provided the most spectacular views I have ever seen from an aircraft during the 90 minute flight back to Bali as we flew over the unspoilt islands we had sailed by, just a glimpse of Indonesia’s 17,000 islands.

Ari, the guide on my last trip onboard the Katharina, said I should visit Labuan Bajo, his hometown and explore Flores. When we arrived, I asked around. The boat he was on could be seen sailing out of the harbour and now from the plane I could see it once more, a small white speck alongside a coral reef. He was right, such a beautiful and enchanting destination. Someday I’ll come back to explore it further.

Getting there
Garuda Indonesia flies from Sydney to Bali and on to Labuan Bajo. Sea Trek Bali travels to destinations including Flores W: seatrekbali.com

Staying there
In Bali, Kembali Lagi is a charming guesthouse tucked down a side street in Sanur W: kembalilagi.com

Entry requirements
At the time of writing a 30 day visa is required on entry to Indonesia for US$35 (or AUD equivalent). For the latest travel advice check smartraveller.gov.au

A winter holiday at the magical Mount Baw Baw, Victoria