Holi. The very word conjures up images of colours, joy and fun-filled abandon – of spraying coloured powder gulal and coloured water, through pitchkaris, balloons, buckets and what not on friends and strangers alike.

This centuries-old Indian tradition of a ‘muck-up day’ has found favour in modern times all across the globe.

Hindu mythology has it that the festival symbolises victory of good over evil: the demoness Holika was burned to death and her evil brother Hiranyskashipu destroyed by good forces, even though both had the powers of invincibility. Holi also marks the coming of the spring season.

The Sydney-based Australia Hindi-Indians Association (AHIA) celebrated this festival in a big way in early March. A huge crowd of members, their families and friends, around 450, gathered at Harvey Lowe Pavillion, Castle Hill. The venue was apt for such an event. The turnout was massive indeed but it was very well managed by the AHIA executive members and the volunteers. Everyone was in the spirit of playing Holi, enthusiastic, laughing, smearing gulal – red, yellow, green – on one another. What a charged atmosphere it was, the DJ playing favourite Holi dance numbers such as Rang Barse. Everyone danced with abandon, forgetting the mundane, oblivious of their tensions and extending a hand of friendship to strangers. 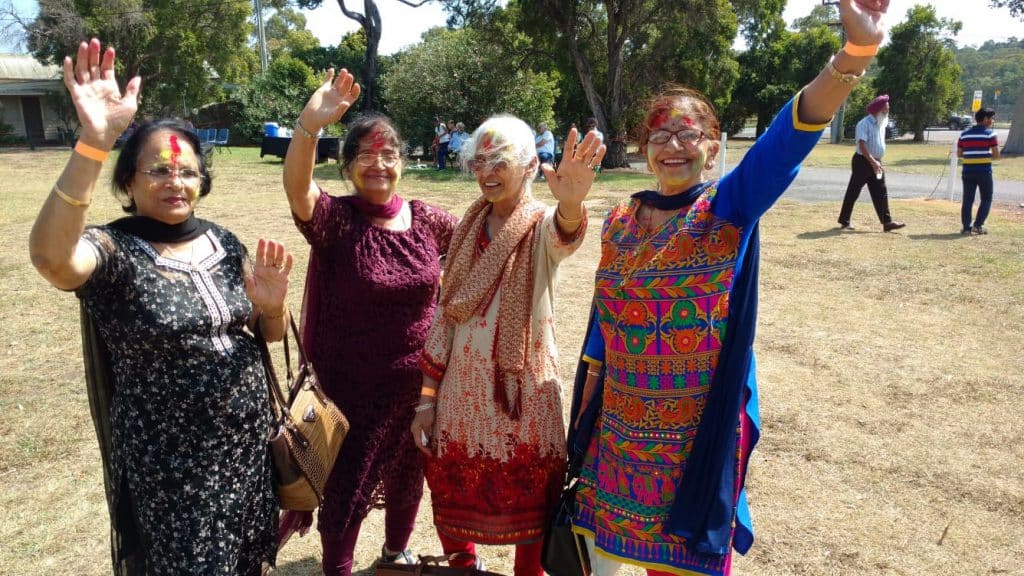 For many children, it was their first exposure to Holi and they had a blast. Among the predominantly Indian crowd, one could spot Australians and Asians who had joined us to celebrate the Festival of Colour, enjoying the vibrant atmosphere, thrilled to be there. This showed what Australia is rightly proud of, a colourful and vibrant multiculturalism!

The food stalls of favourite Indian snacks golgappas, chaat papri, tiki chhole, were enjoyed by all. People were amazed and delighted that thandai, a traditional milk drink prepared on Holi, was also served. Later, delicious lunch was served with freshly made bhaturas. One could see Ajayji, of the famed Maya da Dhaba, himself at the wok on this occasion, and enjoying it thoroughly! This is what par excellence service is all about and this kind of personal attention makes him the best in town. Thanks to Maya da Dhaba staff. Once more the DJ music and rhythmic dhol reverberated in the hall and then began the dandiya dance.

The time and effort in making this celebration a huge success by the AHIA Executive Committee is commendable. Each one of them contributed more than hundred percent. A special mention must be made about the exceptionally energetic Sushma Ahluwalia, AHIA executive member, whose untiring efforts took this event to another level.

Of course, the success of any function depends on the public support, which was found in plenty. There were pleas to make these celebrations a permanent annual feature of AHIA events.

India can become one of top 3 economies in world: Mukesh...