Why ignorance is more dangerous than Muslim immigration 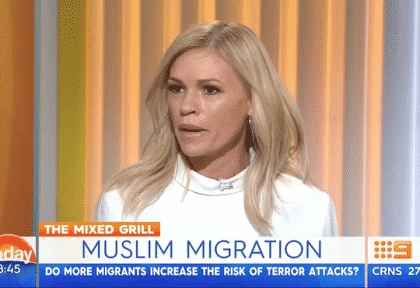 Sonia Kruger’s comments are an abuse of her position

Australian breakfast television has never been a shining beacon of diversity or academia. While there has been some recent progress in other categories, with the emergence of journalists such as Jeremy Fernandez and Waleed Aly, breakfast television remains overwhelmingly under-representative of Australia’s multicultural society. This week, the intolerance underlying Australia’s entertainment industry once again reared its ugly head when Sonia Kruger, a co-host of Channel 9’s Today Extra show, called for a ban on Muslim immigration during the course of a live televised segment, citing her fear of terrorism as the main reason.

The fundamental issue with Kruger’s comments – the one which makes them so dangerous – is the context in which they were made. The views expressed by Kruger were entirely devoid of thought, consideration, or any semblance of rationality; a dangerous combination at the best of times, let alone on live television in relation to a sensitive, divisive issue. Although Kruger’s comments may not have been out of place within her particular circle of friends at the end of a long night of drinking, they did not belong on live national television.
If Kruger had taken a short moment in her dressing room to educate herself before her segment, she would have discovered that banning immigration based on religious beliefs is a virtual impossibility. Not only would such a policy likely be in breach of Section 116 of the Australian Constitution, but it would fall afoul of Australia’s obligations under international laws and treaties. A further minute of research by Kruger may have led her to discovering that not a single country in the world currently blocks immigration based on religious beliefs.
Let’s give Kruger the benefit of the doubt for a moment, however, and consider her ideal Australia: one in which the Australian government has banned Muslim immigration.

Every migrant would, of course, required to check a box to confirm that they are not Muslim. Perhaps Kruger would be handed the honour of force-feeding alcohol to any hopeful men, women and children at the border who are suspected of being Muslims. Those Muslims who remain in Australia would be vilified and persecuted until forced to leave. Many families would be torn apart forever. Australia would become an international symbol of hatred and disunity.
In that context, the natural outcome is that young Muslims in Australia would begin to feel increasingly ostracised and disconnected from society. Already the prime targets for radicalisation before the ban on Muslim immigration, young Muslims in Australia would now become gold dust for extremists; Australia would become a veritable hunting ground of impressionable, disaffected, and rightfully angry youths. Previously focused on preventing lone wolf attacks, ASIO and the AFP would instead be fighting packs of wolves.
It is hard to emphasise enough that the scenario depicted is not an exaggeration; this is the reality of Kruger’s Australia. As Kruger conceded in her following segment, her views may have been “extreme”; that finding a solution to extremism necessitates starting a discussion, and she was merely getting the ball rolling. On this point, Kruger is not wrong – of course there is a problem, and solving that problem will certainly require debate. However, having essentially admitted that her preferred solution was impossible, Kruger conveniently had nothing more to offer to the debate.

The question, then, must be what Kruger was hoping to achieve with her comments in the first place. If she did not genuinely believe that banning Muslim immigration was a plausible solution, she could only have intended for her comments to be emotive, outrageous and divisive. In the current climate, ignorance is an incredibly dangerous game for a talk show host to play; a television personality espousing hatred and intolerance of Muslims is a windfall for extremists, both within Australia and overseas.
Kruger’s supporters have decried the outrage at her comments, labelling any opposition as “left wing propaganda”. Their comments follow other events, such as Brexit, the rebirth of Pauline Hanson’s One Nation party and the rise of Donald Trump, which have given racists and bigots the perceived legitimacy to share their controversial views. It is impossible to reason with ignorance.
Kruger insists that she has many Muslim friends; the truth behind that statement is now unclear. Clearer, though, is the difference between Kruger and racists: Kruger has a platform. She is in a position of privilege, power, and most importantly, responsibility.
She used her platform to spread extreme views due to fear; ironically though, her ignorance and intolerance despite her privileged upbringing is much more terrifying than Muslim immigration.