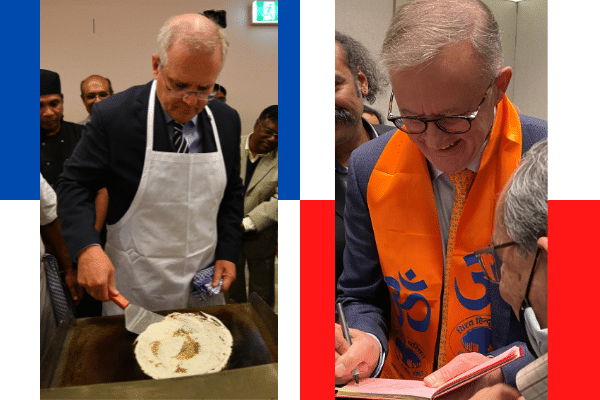 The Indian-Australian community is being recognised as a major vote bank by the major political parties. Not only do large numbers of us live in marginal seats such as Parramatta, La Trobe, Casey, and Reid, where our votes can make a substantial difference, the increasing numbers of incoming migrants is also attractive. The average age of the Indian migrant is 35, and they typically do take up citizenship, and are therefore eligible to vote shortly after migration. This means that on a 3-year Federal election cycle, they have 15-20 opportunities to enter the ballot box.

Converting them early to their ideology could be of benefit to any of the political parties. Besides, the Indian diaspora numbers are growing rapidly – about 750,000 at the last census and numbers to be released later this year point to over a 1,000,000, which is roughly 4 per cent of the Australian population.

At Indian Link, we’ve seen up close the political parties’ desire to woo the Indian-Australian community.

READ ALSO: Coalition or Labor: Who would be better for India?

In the last two years, there have been a number of Zoom forums with Prime Minister Scott Morrison, with Immigration Minister Alex Hawke (especially around the India border ban issue), Minister Michaelia Cash about the religious discrimination bill, and Minister Dan Tehan about the Australia India Trade agreement. The virtual doors have been thrown wide open in the recent past, more than ever before. Even advertising spend by political parties has been stronger, showing the desire to get their unfiltered message out to the community.

While a number of policies and initiatives have been announced by both the parties, there are two issues on which they have ducked and weaved with no clear announcements. As the Indian-Australian population grows, parental migration options for these new Australians need to be clear, and in favour of the migrant community. If Australia is keen to attract young talent from India and harness their energy, it is only fair that the parental ties which bind them to India can be accommodated by quicker and less expensive parental visa options.

Currently, on the Home Affairs website, the processing time for new applications is 30 years – a lifetime for most parents of migrants. Neither the Labor Party nor the Coalition has made any attempt to address this issue. And the Indian community has not taken them to task on this.

While there have been funds announced for various temples and religious organisations, no largesse has been forthcoming for aged care, an issue high up in community concern. The aged care system in Australia has been in the headlines for all the wrong reasons and it is becoming increasingly important for migrant communities to have access to ethno-specific care options. The Indian diaspora is very entrepreneurial and can make an opportunity work if made available. What is required is seed capital and the help of the government to get this started.

The Indian community missed these opportunities to state their case with the political combatants and take advantage of a close election while political parties continue to court the community’s vote.