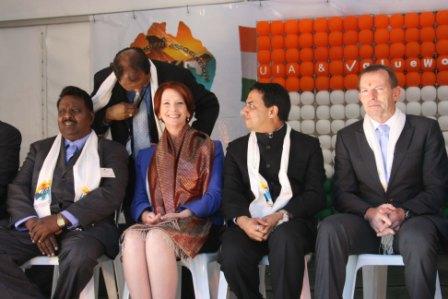 It was a star-studded affair at India Fair this year, with the Prime Minister Julia Gillard attending, along side Leader of the Opposition Tony Abbott, NSW Premier Barry O’Farrell, state Opposition leader John Robertson, and a host of other dignitaries.

The India Australia Friendship Fair, organised by the United Indian Associations Inc (UIA) commemorates India’s Independence Day, and denotes the gathering of the ‘clan’ for a day-long event of food and festivity. Community businesses reach out to the masses with special promotions even as khana-peena and naach-gana go on.

It was a beautifully warm winter day as the Sydney Olympic Park’s Athletic Centre opened its gates to the Indian community for the day.

Madame Tussaud’s wax  museum brought out gorgeous Kareena Kapoor; candidates in the upcoming local council elections shook as many hands as they could; portrait photographer Rajesh Kumar broke a world record by taking over 1000 portraits, and the hand-crafted wooden temples tugged at the spiritual side hidden in every heart.

But, no surprises, it was the food stalls that did the best business (and why not – the jalebis were fresh, the chaat was crunchy, the chhole bhature finger-licking good and the dosas divine…).

The most noise, however, was made by the travel companies, as they brought along their own entertainment. At one point during the formal proceedings, a UIA official was sent bounding off the stage to a stall nearby to tell them to tone down those dhols.

Were numbers down this year from last year? It certainly seemed so; in another observation, it appeared that the large mass of attendees were the relatively newer arrivals, with older settlers preferring to stay away.

Still, the star chief guests made up for it all. Julia Gillard and Tony Abbott, Barry O’Farrell and John Robertson, all did the round of the stalls, checking out the ware as well as meeting and greeting people and happily posing for pictures. Ms Gillard’s first stop was at the henna stall (mehendi artist Zeenat remained on cloud nine all day after doodling on the prime ministerial palm as one of her first jobs of the day). The PM also checked out the Indian fashions on display.

In the formal proceedings, UIA President Amarinder Bajwa introduced the community well to the dignitaries, listing the ways in which we have grown in recent times. He mooted the idea of a “Little India” precinct in the Harris Park area which would not only strengthen the community but also increase tourism. He also urged the government to support the community with more grants, stating quite pointedly that the previous government had been more forthcoming in this regard.

He looked dapper in his bandh-gala, and should perhaps have shown it off more by speaking centrestage rather than disappearing behind the lectern on one corner of the stage.

Prime Minister Julia Gillard, like other speakers after her, chose to keep no barriers between herself and the people. Looking fetching in her embroidered silk scarf, she declared to much applause that she was the first prime minister to join the community on the occasion. Listing all the areas in which India and Australia have close connections, including now the sale of uranium, she also announced that she would be visiting India before year-end.

Tony Abbott, perhaps slightly more charismatic on this occasion, firstly wished India on its anniversary of Independence (a tiny detail that seemed to have missed the PM’s attention). Abbott found himself constantly applauded, such as when he remembered his own visit to India as a 23-year-old: he travelled to Mumbai, Rajasthan, Delhi, Kashmir, he recalled, and in Bihar, he spent some six weeks with the Australian Jesuit mission.

His message of support to Dilip Chopra, “a very old friend of mine”, and for whom he had secured citizenship in one of his first jobs as an MP, was clearly noted by the community: no doubt it will provide a boost to Dilip’s campaign for reelection as a Hornsby councillor in the upcoming local council elections.

To the community, Abbott’s words of encouragement were welcome: “Indian-born people are great citizens of Australia. No community better exemplifies Bob Menzies’ great phrase “lifters, not leaners”. The Indians are lifting Australia to the heights we all want to achieve”.

He concluded, “This is not just an Indian/Australian occasion. Days like today typify modern Australia and as I look around me I see great Australian people”.

NSW Premier Barry O’Farrell began his address with a polite and friendly ‘Namaste’, and then let it slip that he knew his absence last year was duly noted by the community. He went on to thank Indian Australians for their contributions in various sectors of endeavour, and also announced an India trip in October.

Biren Nanda, the new Indian High Commissioner, sounded rather like the old school principal from back home when he remembered on this occasion “the sacrifices of our freedom fighters”. In a speech that was clearly directed towards the personalities seated behind him on stage, he rattled off some stats about India’s incredible growth, and the possibilities for India to learn from the best practices of other developed countries like Australia. Sadly, he had no message for the Indian community here.

In a wonderful new initiative this year, a parade of member organisations was held which went off rather well. The smart Marathi contingent clearly stole the thunder, even from the bhangra-pawnde Punjabis! Organisers later revealed that they have bigger plans for the parade, perhaps to take it mainstream, much like New York’s India Day Parade down Manhattan’s Madison Avenue.

The cultural program was predictable, although the attempts to move away from Bollywood fare were commendable. In one such effort, young Mili Dakshin, a talented artist, created a painting live on stage accompanied to music. Mili completed her painting of Karnataka’s famed Jog Falls in 7 minutes flat. She had hoped to present her work to the PM, but was disappointed not to be able to. Next time, Mili!

Earlier in the day, in what was another first at the India Fair, a citizenship ceremony was organised at the venue with Greenway MP Michelle Rowland officiating.

With fireworks to finish off, it turned out to be quite a day. For next year though, the organisers will need to work harder to attract larger numbers, especially the established community (who will probably return if new initiatives like the parade are advertised well beforehand). Bringing in mainstream audiences could be another challenge.