A trip from the country’s southern tip to its capital is an adventure-filled rustic experience, writes PETRA O’NEILL 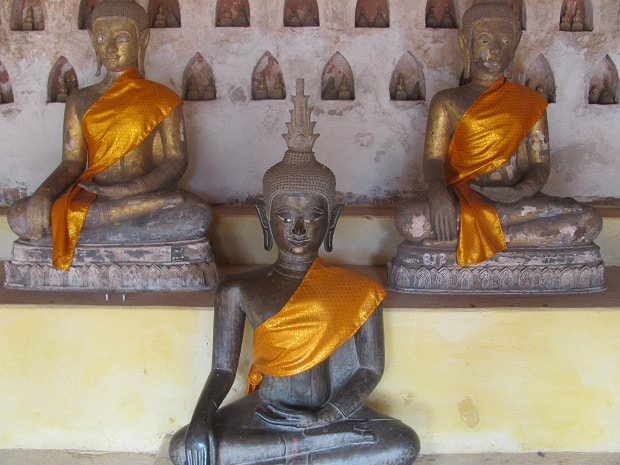 Whether it was my eyebrows that had been left unattended for several weeks or some other curiosity, the Lao woman seated on the bus beside me intently scrutinised my face for 6 hours, all the while screwing up her nose suggestive of disapproval. The VIP bus prominently displayed on posters across the small city of Pakse had morphed into a local bus with hard seats which, when all were occupied, led to the production of plastic stools forming seats for passengers along the aisle. Periodically women vendors would board, squeezing themselves past, peddling the veritable mobile feast they were selling of bottled soft drinks, sliced tropical fruit, sticky rice and BBQ chicken pressed between bamboo sticks.

I never expected that the journey from Pakse in southern Laos to Vientiane 685 kilometres north would take 10 hours as the posters had indicated, so I broke the journey midway at Savannakhet, a city on the Mekong and one of the major crossroads of south-east Asia, with traffic bound for Hanoi and Bangkok.

Here I met an elderly Frenchman riding his bicycle who directed me to my guesthouse, the website conveying somewhat enhanced images as the interior had peeling paint and drips from the ceiling collecting into a bucket. Savannakhet is a sleepy, languid city with honey-coloured French colonial villas, their crumbling facades showing their age. I gathered together market provisions of rambutans, bananas and a baguette for the next day’s journey and faced with a restaurant menu I was unable to decipher, settled on a tasty bowl of French fries.

Next morning I set off by local bus with only two other passengers, a student and a young engineer who worked for an Australian company. Stopping for anyone who waved, the bus was soon fully loaded with provisions so heavy, the axle broke. A rudimentary repair got us going again, with motorbikes, farm equipment and furniture strapped on top, bags of sand, luggage and briquettes underneath. The scenery was flat, unlike the mountainous terrain of the north with fields of rice and corn and small villages. After an 11-hour bus ride, I was relieved to arrive at the delightful Mali Namphu Guesthouse and was shown to my room overlooking a lush courtyard.

Vientiane, the capital of Laos is only beginning to awaken to the possibilities of tourism, and while it offers travellers much to see, the first place I always head for is the Joma Bakery for a delicious rye bread, cheese and salad sandwich, before strolling on the promenade alongside the Mekong, a place where locals gather to exercise in the early evenings.

The next day I visited the Wat Sisaket, a temple dating from 1818 with thousands of Buddha figures of silver, wood, and bronze, some from the 15th century, and minutely detailed murals. It is the only Vientiane temple not destroyed by the Siamese when they invaded Laos in 1828. Opposite is another notable temple, Haw Pha Kaew, dating from 1565 that was badly damaged, later rebuilt and is now a museum for religious objects. Ancient Buddhas dating from the 6th – 9th centuries of stone and bronze line the temple exterior, but sadly the renowned Emerald Buddha, now found in the royal compound in Bangkok, was once housed here. Nearby, the Presidential Palace is a vast flamboyant chateau used for ceremonial occasions that was built in 1925 for the French Governor.

A city with no high-rise buildings, Vientiane is laid back, providing a pleasant lifestyle for its inhabitants including several thousand international aid workers. Many cafes and restaurants have been established in recent years by expatriates.  Vientiane has wide tree-lined avenues and imposing French colonial architecture interspersed with monuments, Chinese shop houses and sprinkled with gracious Buddhist temples. It is a city that is ideal for exploring on foot.

The most striking example of the French presence is the Patuxai, or victory gate, a smaller version of the Arc de Triomphe. Completed in 1969, it features distinctly Laotian ornamentation made from cement that American funds had earmarked for building a new airport. The French left other urban markers, including the Settha Palace Hotel built in the 1930s as an administration building, that opened as a luxury hotel in 1999; and Place Namphou, a large fountain encircled by European restaurants. Lingering cultural influences include locally grown coffee and baguette served by street vendors filled with pate, but adapted to suit with Lao style vegetables and dressings. The best restaurant for traditional Lao cuisine is Makphet, in a lovely old colonial building that provides training for disadvantaged youth.

While travellers head for the orderly Talat Sao Market with its embroidered silks in every form, locals head for Talat Khua Din with fresh produce, clothing and numerous stalls for manicures and hair washing. There are also several high-end boutiques along Nokeo Kumman with fine hand woven silk scarves, silver jewellery and wooden carvings.

The most venerated location in Vientiane is Pha That Luang, a gold-coloured chedi with an elongated spire that is said to contain a relic of the Buddha, and may date to 3BC. It was also badly damaged, pillaged and abandoned for almost a century. Since being restored, it is a pilgrimage site for Buddhists from across Asia.

Change is coming to Laos, but only incrementally compared with the turbo-charged pace of development beyond its borders in Thailand, Vietnam and China. And while services and infrastructure are basic in most parts of the country, any hardship experienced by the traveller is duly compensated. The Mekong and its tributaries provide life support for much of the country, and several days later as I crossed the Friendship Bridge into Thailand, I thought of the conversation I’d had with John while enjoying a delicious mango, banana and pineapple shake.  At 73, he had worked for 30 years for the United Nations undertaking assignments across Asia and Africa. Unintentionally he had decided that for him, Vientiane was now home. Melbourne is busy and bitterly cold in winter, he said, while here it is peaceful. And with that, he hopped on his bicycle and slowly rode off into the night.

Getting there: Several airlines have connecting flights from Australia to Vientiane, including Thai Airways International and Air Asia.

Getting around: The city centre is compact and eminently walkable. For the adventurous, Grasshopper Adventures offers escorted cycling trips of Laos (www.grasshopperadventures.com). Travelling by public bus is challenging.

Where to stay: The Mali Namphu Guesthouse is charming, clean, centrally located and moderately priced. Request a deluxe room facing the courtyard (www.malinamphu.com). The luxurious Settha Palace Hotel has spacious suites and a club-like ambience (www.setthapalace.com).

Where to eat: Many cafes and restaurants have been established in recent years, many by expatriates, including Joma that has great soups, salads and sandwiches. Coffee shops offer free wi-fi, with Common Grounds Cafe and Bakery one of the best.  Makpet serves flavourful traditional Lao cuisine in lovely surrounds.

Where to shop: Saoban works with traditional artisans to preserve and promote village crafts under fair trade principles (saobancrafts.com). Be careful when choosing silk such as at Talat Sao Market, to ensure it is silk and hand-woven.

Insider’s tip: English is not widely spoken. A visa is required for entry into Laos. W: www.laoembassy.net E: laoemb@bigpond.net.au