A Federal election survey conducted by Indian Link has shown that the two leading parties are neck and neck as far as Indian-origin voters are concerned – but there’s a surprise find, an unprecedented rise in support for a third force.

It’s still a while to go before the Federal elections of 18 May and both major parties are still in first gear. Yet, both have been pretty upfront about their policies. The Coalition has gone hard on their economic credentials, the Labor Party is emphasising its health platform, especially the benefits to cancer sufferers and their families. Both parties also come in with their shroud of worries. The Liberal party has had a rapid change of leaders, more in the party room rather than at the polling booths – Tony Abbot, Malcolm Turnbull and then Scott Morrison. The Coalition’s hard right seems to have an extraordinary hold on the policies of the party – climate change, energy management,immigration policy etc. The Labor party goes into this election with a swathe of new taxes or removal of tax benefits, such as abolishing the benefits of negative gearing for future investment properties, halving the capital gains tax concessions, cancelling the franking credits to select pensioners and other tax tightening policies.

It’s early days yet and one is sure as the campaigns roll out, there will be more incentives doled out from both platforms. The political messaging will be tightly controlled and the race to the finish on 18 May could get frantic and mistakes can be made (remember Labor’s- or rather its leader Michael Daley’s – brutal last week at the recent NSW elections?). 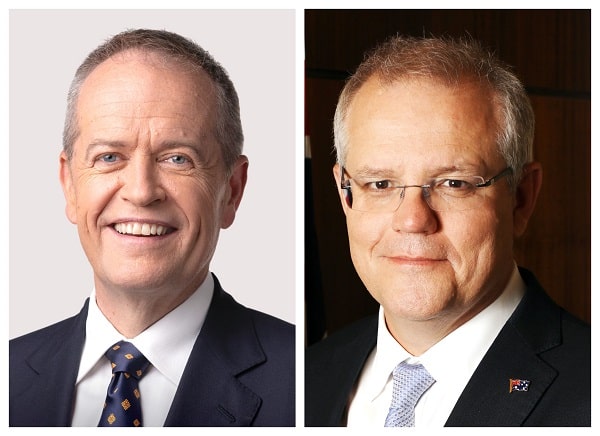 So, what do Indian Australians make of it all?

At this stage, it seems that the community is equally disillusioned with both majorparties – and this is where the surprise find is – support for a third force, the Greens, is up like never before.

Yet, the economic management of the economy and employment issues is appealing to the Indian Australian voters and bucking the national polling trend gives the elections by the narrowest of margins to the Coalition.

Indian Link’s election survey, undertaken online and face to face at select Indian spice outlets in Sydney on the weekend of 13-14 April, gathered data on voting intentions from 632 respondents. 85% of those surveyed were from NSW, and 5% each from Victoria, South Australia and Western Australia. The genders were skewed with more males (56.5%) than females (42.6%), while a small proportion chose not to disclose.

There was a healthy mix of new migrants and those who have been here for a while. Thirty per cent of our respondents reported they have been in Australia for less than 5 years; 38% of the respondents between 5 and 20 years, and 28% over 20 years.

ALP VS COALITION
The Coalition snuck in by a whisker with 38.2% of the respondents favouring them
over Labor (37.9%). The surprise factor were the Greens, who claimed 20.3% of the vote.

Nearly four per cent indicated support for other or independent candidates. 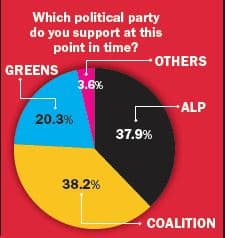 “Do not want Labor or Liberal or Greens; need an Independent who fights for the benefit of the constituency not the pockets of political parties,” was a comment heard in the face-to-face interviews.

The Green vote, which is usually preferenced to the Labor Party, could well give Bill Shorten the keys to the Lodge.

Traditionally, the Indian community vote has favoured the Labor Party, which is perhaps more in tune with the Indian cultural ethos favouring health and education. As the community has matured from the working class migrant group to those establishing, growing or being involved in small businesses, we’ve seen the emergence of a shift away from Labor towards the Coalition (as indicated by previous Indian Link polls). This has been enhanced by the new migrant voters surveyed this time round, who have given economic management a higher rating than health issues, perhaps tilting the pendulum slightly towards the Liberal party.

It is interesting to see the increasing support for the Greens (20%), numbers never seen before in previous Indian Link polls of state or federal elections. Environment issues are beginning to matter, as climate change concerns come closer to our lives in terms of extreme weather for instance, and as passions increase for the protection of our natural sites such as the Barrier Reef.

When many South Asian-origin Australians first arrive here, they admit to being amazed that the Greens are a strong political platform in this country rather than a social environmental movement. In recent years though, they have begun to understand the need for why such a movement might need political clout, especially with climate change, and with the urgency with which we need to adopt more sustainable life practices. The Greens’ rhetoric for compassion towards asylum seekers, their call for greater diversity,
as well as their calling out of the far right voices in Australian society have no doubt touched a chord. The emergence on the scene of firebrand South Asian origin politician Mehreen Faruqi may perhaps have played a role too.

SCOTT MORRISON VS BILL SHORTEN
Again, bucking the national trend, from a leadership point of view, Bill Shorten is clearly favoured ahead of Scott Morrison. 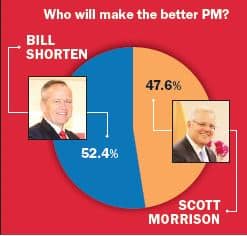 Though it is early days in the election, the stability at the top of the ALP has ensured
that Bill Shorten has been visible to the Indian Australian community: Bill has been seen at various Indian functions over the last three years. PM Morrison’s leadership started only eight months ago in August 2018, and though he has attended a few community functions, he has not had extended interactions with the community.

Larger numbers within the Indian Australian community seem to have higher faith in Bill Shorten. One respondent said, “At least I believe, if Bill Shorten is elected, he will be around for a while. On the other hand, have no idea of what bloodletting will be done in the Coalition, even if Mr. Morrison becomes Prime Minister again.” 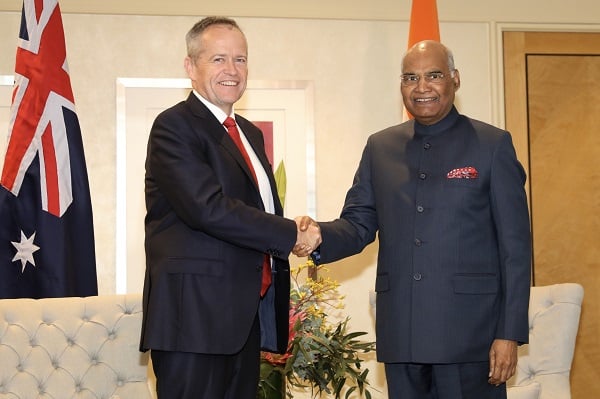 Of course this observation is factually incorrect, and perhaps the Coalition must take more pains to point out that they have new safeguards in place now, about rotating leadership.

The survey also revealed that the Indian Australian community, in large, is not concerned about the backroom shenanigans in the Coalition. In our 2016 election survey too, it had emerged that the change from Tony Abbott to Malcolm Turnbull in 2014 as leader of the Liberal Party and subsequent Prime Minister of the country had no impact on voting intentions of the Indian Australian community. More than 51% had said then that the changeover had no influence on their voting decision.

This is also reflected in the current survey where 46% of those surveyed said the change in leadership in Coalition did not affect their choice. Perhaps, hailing from an Indian background where there is an expectation of political manoeuvrings as par for course, changes within the party do not amount to much: the understanding is that there will be continuity at the policy level. 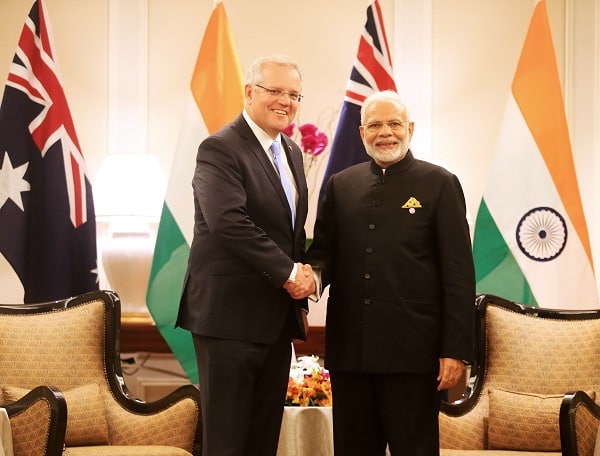 Likewise, the tax changes proposed by the Opposition also has made little impact, with 45% saying that these tax changes had not influenced their decisions.

COMMUNITY CONCERNS
The long-held view within the community has been that the Labor Party will address community concerns better. This was borne out at the 2016 survey as well (Labor’s 53% to
Liberals 40%). But this year, the Liberals seem to have closed the gap – 44.1% as opposed
to Labor’s 45.3%. The Liberals have made admirable ground here as they increasingly
reach out to the community. Ten per cent were clearly impressed by the Greens, who have
done well at the expense of the Labor Party.

The cuts to immigration by the Liberal party has not resonated well with the community with 52.4% expressing more confidence in the Labor party immigration policies, as compared to 47.6% by the Coalition. One example is the issue of long-stay visas for parents: though the Liberals are pushing this now, it seems the sponsors must have a substantial joint family income of over $80,000. “That is a lot of money,” said one respondent, “especially if we are buying them health insurance, why should this level of earnings be required?”

INDIA-OZ MATTERS
As to which party will forge better relations with India, Liberals have surged ahead at 52% as compared to ALP’s 48% (in the past Federal elections, these numbers were the other way around, with a Labor getting 48% of the votes and Liberals 46%). Prime Minister Modi’s trip down under, and his friendly vibes with the then Prime Minister Tony Abbott were fondly recalled by more than a few respondents. 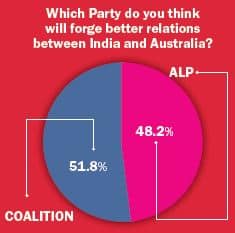 With the White Paper of an Indian Economic Strategy 2035 on the table, it is widely believed that the potential is there for enhanced engagement. Whichever party comes to power now, will need to step up efforts to take this relationship forward. “After the Indian elections are done in May, and with the new Australian government in place, it will be a good time for the newly elected leaders to start afresh,” one respondent said.

TALKING POINTS THIS ELECTION
The election themes of both the parties have resonated well with Indian-Australian voters but the Australian economy and employment edge out education and healthcare as issues that concern most. Indian voters are aspirational migrants wanting to succeed in their new country and feel that a strong economy and strong employment will allow them better
opportunities. While health is important to them, being a younger migrant community, it has only come in at third position in terms of issues concerning the voters.

Surprisingly, environment came up as important and is ranked above education: the Greens with their pro-environment policies are certainly making themselves heard in the Indian community.

But in the end, it all comes down to the hip pocket again, just as our previous surveys have shown. It’s the economy – for sure!

To recap, support for both major parties is on an even keel, perhaps closer in numbers within the Indian Australian community than what is being seen in the mainstream polling. The Coalition needs to reach out to the community more strongly, as their key message of strong economy and jobs is an accepted mantra for the community – they need to build on this message, or the threat to this which might come with a change in government.

The Labor Party has been making strong overtures and Bill Shorten seems to have an edge over Scott Morrison, again in contrast to the mainstream polling. The Greens and the independents are increasingly attracting the Indian Australian vote.

There’s still some time to go before 18 May but on early count, it would seem that the Labor-Green link is currently holding sway in the Indian Australian voting psyche.