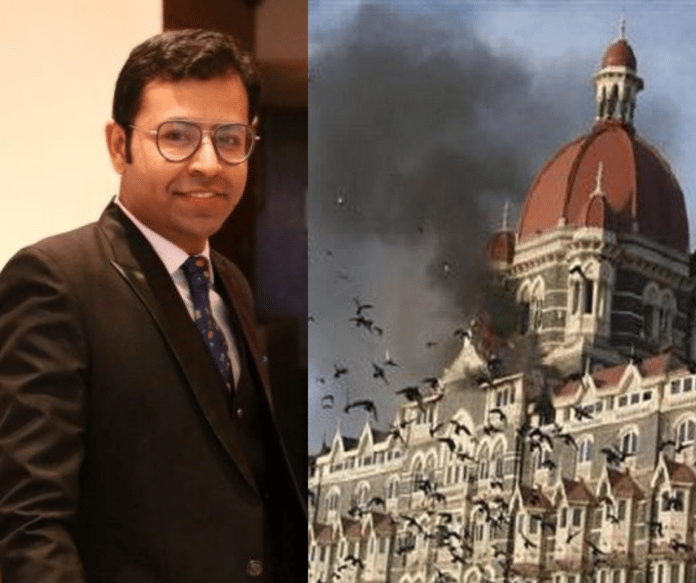 “Hey, this is Ankur Chawla, and you know what, he is one of those who survived the 26/11 attacks.” No matter what you do subsequently in life, there’s always one incident that defines you. For me, it was 26/11.

The day began like any other working day, although, ironically, it was my off day. I was at the iconic Harbour Bar of Mumbai’s Taj Mahal Palace. It was my first job, so I didn’t really mind being called to work on my off day.

It was a dream job for a greenhorn who had come from Delhi to Mumbai with stars in his eyes, all set to make a mark as a young hospitality professional with the potential to rise to the top.

The day was moving slowly and I was chit-chatting with one of the regulars, talking about the lifestyle of the city’s rich and famous set. Suddenly, we heard a loud popping sound, as if the cork of a bottle of vintage champagne had been released accidentally.

I was overcome by the fear that it could be the bottle of Dom Perignon, the exquisite champagne on display outside the bar. I feared that I would be penalised for it and lose a hefty amount from my modest stipend, so I rushed out of the bar, but when I came near the door, I saw a man toppling over, his white shirt turning red from the blood oozing out of his shoulder.

That was when I realised that he had been struck by a bullet. It was my first encounter with a dying man.

A number of rumours had been swirling around the hotel moments before I ran into the dying man. Some said a group of guests had got embroiled in a fight. Others said gang wars had broken out in the city. Some even insisted that Dawood was back. As the situation kept unfolding, we were running like headless chickens trying to make sense of the chaos.

Funnily, even in that state of siege, some of the guests managed to retain a wry sense of humour. On spotting this regular guest leaving the bar with his glass of single malt in hand, I stopped him and offered to help him carry the glass. He replied: “Son, I may not be alive tomorrow and I doubt if I will get this malt in heaven; allow me to romance it, please.”

His response made me numb, but today, it inspires me to live life to the fullest till the last minute. We started evacuating from Harbour Bar and went to the Japanese restaurant, Wasabi, on the floor above, and then through the back areas we finally reached The Chambers, where we all were supposed to meet and hide the guests.

It was inspiring to see how the Taj staff took charge of the situation and how our seniors took tough decisions, though they knew at the back of their heads that their lives were also in danger. What surprises me till this day is that although every staff member knew about the back door exit, none of us even thought of running away, leaving the guests to fend for themselves.

Gathered at The Chambers, with information coming in from all over the place, the suspenseful silence punctuated by continual gunshots and vibrations from the explosions, we took a collective decision around 2 a.m. to evacuate from the staff doors in the back areas. Different batches were made and a human chain from the back area of The Chambers to the staff exit was created by the staff members.

I was in the third batch. All of a sudden, we heard a burst of gunshots. That was when, as we learnt later, the terrorists had come in from different sides and started shooting randomly. When we heard the gunshots, we started running in whichever direction we could and that’s exactly when I was overcome by the feeling that any one bullet could strike me down.

This was the time when we lost most of our colleagues, including chefs, who were hiding behind the kitchens or in the walk-in refrigerators. We ran towards the linen rooms and hid ourselves right under the uniforms. Throughout, I was talking to my co-workers, and kept learning about people we knew being felled by the terrorists.

One of my closest friends, who was with us a couple of hours earlier, was no more and the news about others kept pouring in. In the next few minutes, after escaping a bullet narrowly, I could see my life and my dreams come crashing down. The only thing I wanted to do was to meet my family once. That was all I could think about.

In the morning, around 8 AM, we were evacuated by the commandos and I can never forget the breath of fresh air, and the comforting sense of being alive after all.

Today, as I look back, I feel there is nothing more true than the old saying, “If it doesn’t kill you, it makes you stronger.”

That day changed forever my way of looking at life and most importantly, living life. I love what I do now; I cherish each moment much more than I used to; I take bolder decisions. I now know the value of life and how easy it is to lose it.

The only thing certain about your life is inevitable death, and we don’t know when it will come. Before it comes, do something that will make you happy and content when you finally are on your deathbed.

Ankur Chawla, a beverage entrepreneur, is the author of 14 Hours: An Insider’s Account of 26/11 Taj Attacks. He is also a TedX and Josh Talks speaker.