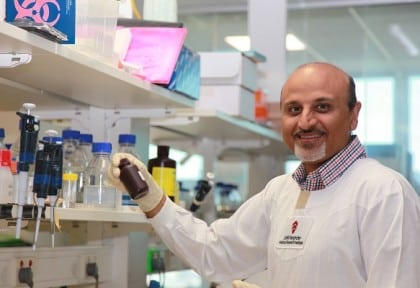 As a post-doctoral researcher with PGIMER Chandigarh, Rajiv Khanna’s ongoing interest in immunology brought him to Australia in the late eighties. After a brief stint in Adelaide, he joined the Queensland Institute of Medical Research (now known as QIMR Berghofer), eventually heading its Centre for Immunotherapy and Vaccine Development.

Since then he has been at the helm of cutting edge translational research, breaking new ground in cancer therapy with several patents and world first clinical trials. His illustrious career stems from a long-standing and deeply entrenched interest in the human sciences, spurred on by his pharmacologist father.
Dr Khanna has been recognised with the Order of Australia (AO) for “distinguished service to medicine in the field of immunology, through contributions to the development of cellular immunotherapies for the treatment of cancers, infectious complications and chronic disease.”
“As a scientist and medical researcher, it is wonderful to be honoured by the wider community,” he told Indian Link. “It is recognition of two decades of work, not just mine, but also that of my whole team.”
He went on, “Professor Denis Moss and I started to work together on immunotherapy hoping it would lead to new treatments, and that has become a reality. We never imagined that we would be where we are today. If our treatments can improve both life expectancy and quality of life for patients, then we will have achieved our goal.”
Khanna is both humbled and proud to be part of what is clearly one of the finest medical research fraternities in the world.
“Australia has some of the best scientific minds and top discoveries, despite our relatively small population,” he reiterated. “And Australian researchers are making invaluable contributions to the advancement of science and therapies, despite the fact that countries like US have far greater funding for scientific research.”

In the field of immunology alone, we are certainly among the top 3% globally, he stated. “Our research institutions in Sydney, Melbourne and Brisbane are among the finest in the world. In fact, we often undervalue ourselves and our contributions.”
Dr Khanna is particularly grateful for the generous donations that have made his substantial body of research possible, noting that he had been “very lucky to get grants from NHMRC as well as other organisations and philanthropic individuals.”
At QIMR Berghofer, his pioneering research includes developing cellular treatment for Multiple Sclerosis patients, leading a clinical trial targeting Glioblastoma multiforme, one of the deadliest of cancers, besides creating an immunotherapy treatment for the head and neck cancer nasopharyngeal carcinoma, as well as for those with complications from organ transplant.
“Aggressive cancers like brain cancer continue to pose challenges but with the collaborative work being undertaken with wider global research community, we will have some positive outcomes in future,” Khanna hopes.
Cancers patients traditionally have three pillars of treatment – surgery, chemotherapy and radiotherapy. “We have added immunotherapy, which has fewer side effects, as the fourth pillar,” Dr Khanna explained, delving into his area of expertise.
Immunotherapy involves taking a patient’s own immune cells and “boosting” or “training” them to destroy viruses that are present in cancer cells. Patients are infused over a number of weeks and monitored for twelve months. It is specifically tailored to suit individual need, depending on the cancer progression. Where patients are not well enough for their own immune cells to be used, Prof. Khanna and his team have also developed treatments using immune cells from healthy donors.
Besides authoring numerous research papers, Prof. Khanna has also contributed to the development of stronger relations between Australia and India, particularly in the areas of science and medical research, through the Australia India Business Council. He is very actively involved in social and cultural activities of the Indian community in Brisbane.