The spiritual side to marathons 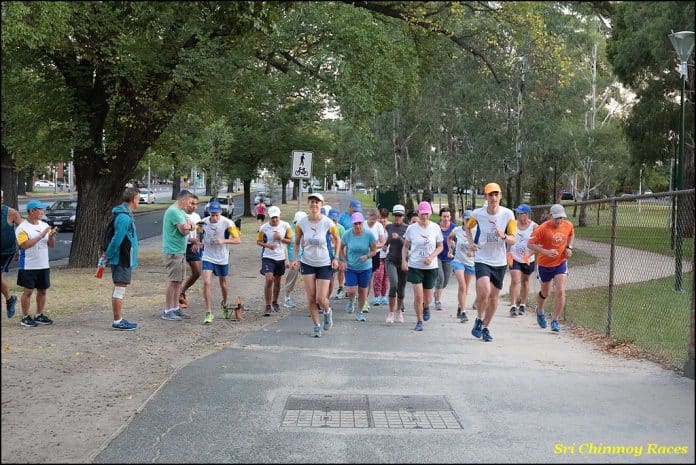 He encouraged marathon or daily running as a means to maintaining and increasing both physical and spiritual fitness. “We have to keep the body fit, and for this, running is of considerable help. If we are physically fit, then we will be more inspired to get up early in the morning to meditate. True, the inspiration to meditate comes from within, but if we are healthy, then it will be much easier for us to get up at five or six o’clock to pray and meditate. In this way the inner life is being helped by the outer life,” said Sri Chinmoy in reference to fitness and meditation.
Similar celebrations honouring Sri Chinmoy’s Chico marathon run were held throughout the world in America, Europe and New Zealand. In Australia, we aimed to honour this achievement with a marathon and celebrate the whole weekend. The weekend coincided with the Peace Run finishing their Australian leg of the first All-Nation-Covering Southern Hemisphere Peace Run, a torch relay for peace Sri Chinmoy founded in 1987. As a result there were plenty of fit runners around used to the 37 degree heat forecast. Around 55 Australian and international members of the Sri Chinmoy Marathon Team attended the weekend. Four members of the Perth Sri Chinmoy Meditation Group attended.

It was a very active weekend with plenty of performances, spiritual plays and meals. On the Saturday we certainly carbo-loaded the day before, eating heaps of food, an Indian meal and a massive dessert. Participants watched videos of Sri Chinmoy running his early marathons including Chico and Toledo which inspired them to think about the next morning. Some were running as teams, some as individuals and some like Goncalo, a young runner from Portugal, were running their first marathon
“I felt awesome the whole marathon,” he said later.
I think everyone else had the same experience. “I can’t believe I did it,” said Rakhi Mahbuba, a former Miss Bangladesh now living in Perth, who ran 10 kilometres in a team, further than she ever had before. “Halfway through I felt so emotional – the pride! I was inwardly moved, being here was really special.”

The marathon started around 7.15am in Princess Park on a flat, scenic, cinder track that was 1.9km. An amazing aid station loaded with coconut water, electrolyte, donuts, sea weed, crisps and so on kept runners going as the day warmed up.
Everyone gathered for an early Sunday evening meal before departing and many tales of the day unfolded as participants ate wholeheartedly regaining all the weight they had just lost!