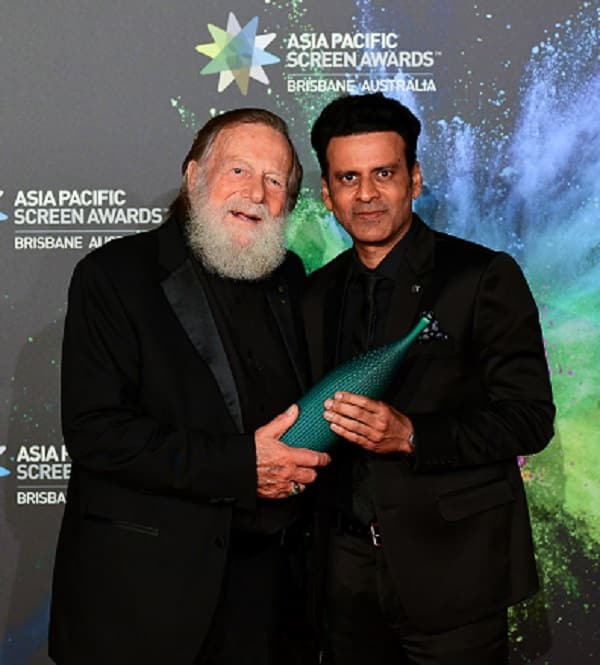 Manoj Bajpayee has won the Best Performance by an Actor award at the 13th Asia Pacific Screen Awards (APSA) held in Brisbane, for his role in Devashish Makhija’s Bhonsle, a film that sensitively explores the nuances of political and regional conflicts unravelling in India.

The thespian created history by being the only actor to have won the award twice, previously earning the recognition in 2016 for his underrated performance in the brilliant Aligarh.

India also created a record of sorts by winning in the same category for four years in a row. Rajkumar Rao and Nawazuddin Siddiqui won the award for their performances in Newton (2017) and Manto (2018) respectively.

Dedicating the win to his daughter, Manoj said, “I was praying that I win an award this evening, not for anyone but my little daughter.” She is at home hoping for my victory, he added.

The 50-year-old took the opportunity to shed light on the numerous financial obstacles Bhonsle had to endure before finally going into production; a sad fate many independent Indian films have had to endure consistently. “When Devashish, the director, came to me with the script five years ago, I loved it. Since then, we had been looking for financers to produce the movie. Those who, because of me, initially showed interest in the project also ran away. Finally, we managed to get a group of people who were ready to invest. Winning this award is poetic justice for every team member, many of whom worked on the sets for days without pay,” he said. Incidentally, Manoj is also one of the producers along with Piyush Singh, Abhayanand Singh, Saurabh Gupta and Sandiip Kapoor.

He also thanked his co-stars who also gained rave reviews – Santosh Juvekar and Ipshita Chakraborty Singh – and other nominees. “I would like to congratulate Navid Mohammadzadeh (Iran) and others for giving such remarkable performances in their films. I have learnt a lot from all of you.”

In a post award interview, the actor reiterated the importance of the recognition. “For me, being nominated at APSA itself is a great achievement and I can’t believe I have won it twice. The films nominated here are watched globally and are judged by a panel of accomplished jury members who don’t compromise on quality and excellence. Also, this award is a testament to the blood and sweat of my colleagues and the years of waiting the project had to undergo.”

In Bhonsle, Manoj plays the titular character, a retired Mumbai Police constable whose monotonous life goes awry when he finds himself shielding a young Bihari woman and her little brother against the vitriol of his Marathi neighbour. The film is a commentary on the ramifications that hate-filled politics and jingoism resorted to by politicians have on the general public and is set against the background of the long-standing simmering tensions between Marathi residents and Bihari migrants.

The APSA award is another feather in the cap for Manoj who has had a stellar year, including winning the Padma Shri and gaining rave reviews for his first web series The Family Man, now streaming on Amazon Prime.

Another Indian, emerging filmmaker Ridham Janve won the APSA Young Cinema Award for The Gold-Laden Sheep and The Sacred Mountain (Sona Dhwandi Bhed Te Suchha Pahad) which was also nominated for Best Feature Film and Achievement in Cinematography. The film tells the story of a remote mountainous culture under threat from modernity.

The region’s highest accolade in film, the uniquely Australian initiative, APSA ignites and celebrates the cinematic excellence of the 70 countries and areas of the region. Stories encompassing 13 countries and areas were awarded at the annual event, with the majority of the winners also being their country’s official submission for the Academy Awards in the Best International Feature Film Category.