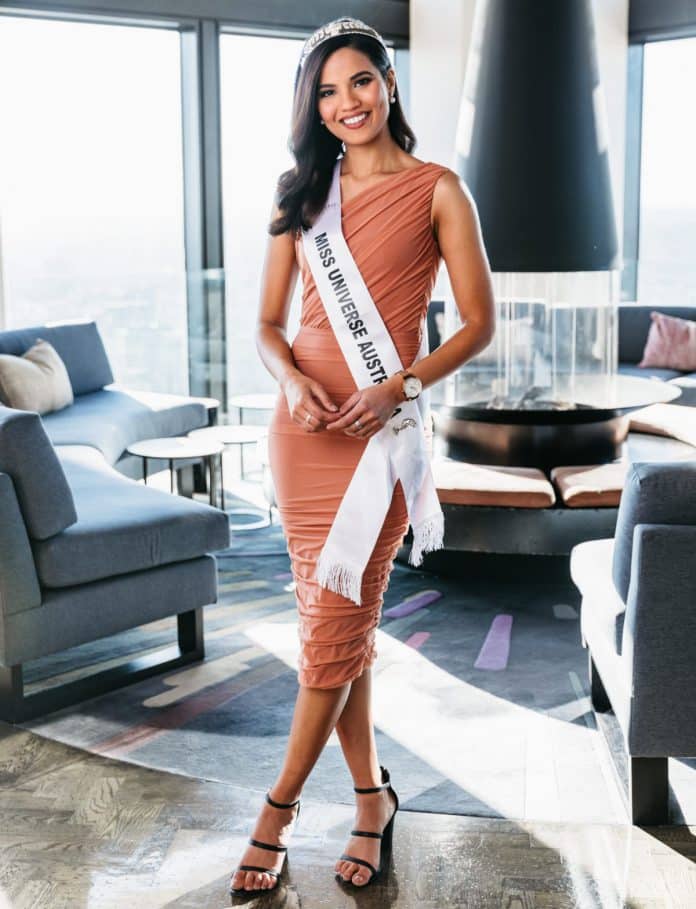 Reading Time: 5 minutesThe first things that strike you about her are her confidence, her winsome smile and her friendly nature. To us those could be winning traits in themselves, but clearly Priya Serrao has everything else that it takes to be crowned Australia’s most beautiful woman.


Of course the newly crowned Miss Universe Australia never thought of herself in those terms, we know now. “I hadn’t done anything like this ever before,” Priya told Indian Link. “This is my first ever pageant, and I don’t model either!” In fact, she was so sure she wouldn’t make it to the top that she didn’t even invite her family to the event!
It was a post on Instagram by last year’s Miss Universe Australia winner Francesca Hung that prompted Priya Serrao to take part in the 2019 pageant. In hindsight, it feels like something that was meant to be for the India-born Melbourne-based Serrao. After all, India has a long lineage of beauty pageant winners, including super-famous ones like Sushmita Sen (Miss Universe 1994), Aishwarya Rai Bachchan (Miss World 1994) and of course Priyanka Chopra Jonas (Miss World 2000) and Serrao is acutely aware of this fact about her country of birth. Then there’s her inspiringly relatable story itself – the 11-year-old girl who moved with her family from India to Australia (via Oman), didn’t fit in anywhere, and found her initial period of adjustment in Australia “challenging”. Add to that her credentials as a law graduate and the unwavering support of her family, and you’d think Priya Serrao was destined for the title.
The truth is far different though – turns out, Serrao just wanted to enjoy the event. “Maybe the fact that I didn’t even think I’d make it to the top ten meant I didn’t put too much pressure on myself. I went in with the intention of giving it my best shot, being completely myself and having fun!”
And so Priya Serrao will continue to have fun, as the reigning Miss Universe Australia 2019.

For the 26-year old Secunderabad-born Priya, life has come a long way from her roots. What we’ve seen of Priya Serrao in the last week, at the pageant and in media and TV appearances such as on Have You Been Paying Attention, she comes across as an intelligent young woman, supremely self-composed, who is willing to speak her mind. Which is why it’s surprising to learn that one of the reasons her parents were so supportive of her entering the beauty pageant was so she could improve her public speaking skills. “I think they understood that my rationale wasn’t to enter just for the sake of entering but to use the achievement as an opportunity to do something tangible and for the greater good. I think they thought it’d be useful to build my public speaking skills (I’m still working on this!),” admitted Serrao.
Being so matter-of-fact about the pageant and her chances in it, also meant that Serrao was able to balance her career, her full-time job and the pageant preparations quite efficiently, and without being overwhelmed. “The commitment wasn’t too difficult to manage and work was accommodating enough to let me take two weeks off for Bali and the national finals. I also fit in my exercise routine before or after work and tried best to eat healthy,” described Serrao.
Of course, believing she wouldn’t make it to the top ten doesn’t mean Serrao didn’t want to win. It was the reason she entered the pageant in the first place. “I thought it would be a good way to gain a platform to start a conversation on issues I care about.”
Issues that she continues to care about and wants to bring more attention to, now that she has a sizeable platform to do so. “I intend on making the most out of every second of this precious opportunity to start conversations about issues such as diversity, inclusion and privilege,” she revealed. “I’d also love to partner with local Melbourne organisations as well as UN agencies going forward.”
Serrao has every reason to be optimistic about these issues. Her own life experience is proof of the diverse and inclusive nature of Australian society. Even the traditionally conservative Miss Universe Australia pageant got sufficiently woke in 2019 by crowning two women of colour as the winner and runner-up (besides Serrao, the pageant’s first runner-up was Western Australia’s Ugandan-origin model Bella Kasimba). Gone are the insecurities and “outsider” feelings of the 11-year-old Indian girl fresh off the plane to Australia. “Australia is my home now,” acknowledged Serrao. “I think winning this title is a testament to Australia’s commitment to embrace diversity. I am so lucky to live in a country which has provided me with incredible opportunities and I’m so grateful that I get to represent Australia internationally.”

Although she’s a true and proud Australian, her Indian heritage manifests soon enough, when talking about India and the impact her win might have. “I haven’t been to India in recent years unfortunately, but I have some really great memories of India including swinging on Banyan trees, celebrating Holi, visiting family in Mangalore and watching Dhoom 2 in the cinemas. I used to be obsessed with that movie!”
As someone who didn’t fit in when she first moved to Australia and has now gone on to embrace her diverse self, Serrao is in a unique position to impart wisdom to young people who might see themselves reflected in her. “I hope my win can encourage young people to embrace their difference and be proud of it because it’s what makes you unique. I hope it also encourages young people to explore opportunities that they wouldn’t have thought about otherwise.”
There’s also a little something that’s quintessentially Indian, such as pageant winners Aishwarya Rai Bachchan and Priyanka Chopra Jonas going on to pursue very successful film careers. Would Serrao also make a similar shift in her career, from law to the movies? A self-professed nerd, Serrao says she’s someone ‘who enjoys being stimulated intellectually’. But while she jokingly chimed the classic beauty queen line about “supporting world peace” on HYBPA earlier this week, Serrao candidly told Indian Link, “I love advocating for issues, so in the long term I think I’d always revert back to working in that capacity. However, I like the idea of having new experiences and would consider it if a suitable opportunity comes my way.”
For now, the Miss Universe Australia 2019 is focused on her next target – the Miss Universe title. Serrao’s excitement was palpable when she said, “The next step is to begin preparation for the international competition. I’m so excited to find out when and where it’ll be held because there hasn’t been a formal announcement yet. I’m also incredibly excited about meeting all the other participants from all over the world!”
- Advertisement -
Share
WhatsApp
Facebook
Twitter
Linkedin
Previous article'Classroom on wheels' secret behind India's World Cup success
Next articleSpice Angel: In conversation with MasterChef contestant Sandeep Pandit