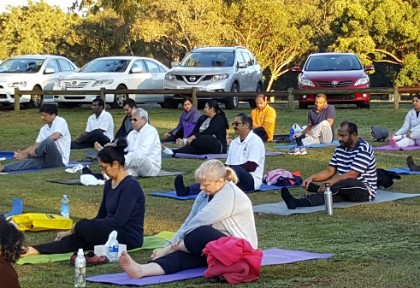 Spirit of India hosts 108 repetitions of Surya Namaskar in Parramatta

A radiant Praful Desai proclaimed after he had finished 108 repetitions of the Sun Salutation (Surya Namaskar), “I feel like I’ve just won Olympic gold.”
He was one of 50 participants at a yoga event organised by the Spirit of India organisation on 20 August.
They laid out their yoga mats at 7am at Parramatta Park, and finished at 10.30am. It was a special event arranged by the not-for-profit, the objective being to educate people on the benefits of the regular practice of this iconic yoga routine.
Most of the participants had never undertaken a 108-set routine, but took up the challenge sportingly.

They walked away knowing they would do this again: typically, 108-ers report upon finishing that they felt like they had had a whole body massage.
Yoga teacher Suresh Khatav who led the routine, has been instructing for the past 12 years.
He noted, “Surya Namaskar is a complete exercise, the regular practice of which results in improved flexibility as well as in overall physical and mental health.”
He said it is known to help with increased energy levels, increased radiance, strengthening of the immune system, improved digestion, eyesight and life span.
The Sun Salutation is a powerful sequence of 10-12 poses specifically designed to work out all parts of the body. Its postures involve a wide range of movements: forward bend, back bend, being still, lengthening the spine, grounding the feet, strengthening the upper body, stretching the hamstrings, expanding the lungs and more. That is why Surya Namaskar is the ideal way to warm the body at the beginning of a yoga practice. Even if you do not intend to practice yoga, the Sun Salutation is a great way to start the day, as it also works on the mind. By hearing the breath and holding the gaze (drishti), these movements allow us to centre ourselves and to quiet our wandering mind.
The Spirit of India is considering regular events, once a quarter, for Sun Salutation to encourage more participation. The next event is scheduled for Sunday 4 December 2016.
To participate, contact Suresh at spitritofindia2002@yahoo.com or call on 0412 202 182.

Like many rituals in yoga and in Hinduism, the Sun Salutation is repeated 108 times. The number carries special spiritual significance. Vedic mathematicians view 108 as a number representing the wholeness of existence. The number also connects the sun, the moon and the Earth: the average distance of the sun and the moon to the Earth is 108 times their respective diameters. According to the yogic tradition, there are 108 pithas, or sacred sites, throughout India. Also, there are 108 Upanishads and 108 marma points, or healing points in the body.