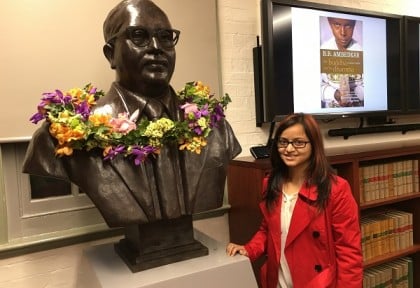 It’s a rather curious birthday present, but one that reflects the growing engagement with India in Australia’s universities.
At the 21st anniversary of its foundation, the Law School of the Western Sydney University was gifted with a bust of Indian social rights activist and lawyer Dr BR Ambedkar.


The architect of the Indian Constitution, whose 125th birth anniversary is being marked across India this year, now joins a select group of Indian personalities whose likeness can be found on uni campuses in Australia: Mahatma Gandhi, Rabindranath Tagore, even Rajiv Gandhi.
Donated by the Indian Council of Cultural Relations, the bust of Ambedkar was created by sculptor Gautam Pal and will be housed at the Moot Court at the university’s Parramatta campus.
Thanking the Government of India for their gift at an unveiling session attended by staff and students, Prof. Linda Taylor, Pro Vice Chancellor (International) said, “Global engagement, especially with India, is critical to our global growth. The University mirrors Dr Ambedkar’s passion for community engagement, access and social justice.”
Deputy Vice Chancellor Prof. Denise Kirkpatrick agreed, “Our university provides a fitting home for Dr Ambedkar.”
Speaking at the launch, dignitaries highlighted the special relationship between the university and various Indian institutions.
Prof Michael Adams, Dean of the School of Law, said, “The generous gift of the bust of Dr Ambedkar reflects the closer connection between our communities.” He spoke of his visits to various Indian institutions, and an upcoming symposium at Bhopal.

“The bust brings a piece of India to the university,” High Commissioner Navdeep Suri said. “I thank the university for its generosity in acknowledging a founding father of India.”
He also spoke about the work of the man being honoured, especially his affirmative action plans that have allowed disadvantaged communities to rise up.
Dr Hari Harinath CEO of Multicultural NSW highlighted the principles that governed Ambedkar’s life and work, and of their inspiration in his own current role.
The occasion also marked the announcement of winners of an essay competition on Dr Ambedkar organised by the Consulate General of India Sydney (Nishtha Sharma, Snigdha Rai and Sunila Dixit took home the honours).
Special guest Dr Rupali Bhamare of Melbourne, introduced by Prof. Alpana Roy of WSU, represented the Ambedkar International Mission Australia and profiled the man for those that had not heard much of him.
- Advertisement -
Share
WhatsApp
Facebook
Twitter
Linkedin
Previous articleBikinis as well as bindis
Next articleEmerging Blue