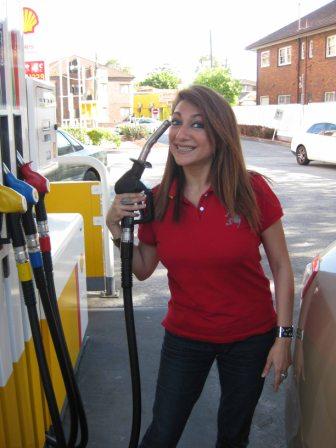 Don’t know if it’s a subcontinental thing or the case with women everywhere… or just an Uzma thing.. .but there are some things we girls can do and others that just don’t seem to come naturally. Men seem to be naturally wired to do certain things, while women do others to perfection. No offence to any of the sexes but there seems to be a bit of “his” and “hers” going on in daily life. The whole hunter/gatherer mumbo-jumbo makes a lot of sense sometimes!

I have a million and a half such “his” and “her” moments in my life which, if nothing else, provide some comic relief later when the frustrating part is over!

Coming from a reasonably well-to-do family in Pakistan , I had led a very sheltered life. When I arrived here I had never seen the face of a bill and wouldn’t have known what to do if one hit me in the face. I had never cooked or cleaned, never parked my own car or filled fuel in it (what are drivers for?), never washed a dish or used a dishwasher. I was a blissfully ignorant laundry and fuel-filling virgin!

The laundry part sorted itself out soon after my arrival, but despite my husband teaching me how to, I had never filled fuel in the car…well, not until recently anyway.

It was a regular morning, the usual mad dash to school, breaking my neck to get my daughter there on time! I drove off in a frenzy, breathing only when I stopped at the first traffic light. I looked down and saw the fuel gauge light blinking frantically at me. I looked again…could it really be? There was no fuel in the car? And then it all came rushing back to me like a bad allergy – my hubby had said that there was no fuel in the car the day before when we were driving around with the fuel gauge light on all day. He’d said he’d fill it up, could he really have forgotten? A feeling of panic engulfed me and I had to find out what was going on. I called him as soon as I hit the second traffic light. I was so hysterical he thought I’d run someone over!

Complete hysteria took over when I found out that he’d actually forgotten to put fuel in the car the night before. My daughter’s school is about a 30-minute drive from my house, I wasn’t even halfway to there and we’d already been driving around on an empty tank for a whole day – which meant there was probably nothing left in the reserve tank either!

I drove the entire way sitting at the edge of my seat waiting for the car to stop at any minute. Throughout the miserable journey I kept trying to figure out my “plan B” in case the car stopped. There wasn’t a minute to spare; I was already going to beat the school bell by the skin of my teeth and there was no way I could take a diversion to get fuel. “Get fuel…oh Lord, who’s going to get fuel for me?!” was all I kept thinking as I flew us to school.

I managed to get my daughter there on time and made another hysterical “How could you do this to me” call to my husband.

I arrived at the fuel pump looking like a ghost! Hell, in Pakistan  even the men don’t fill up their own cars, the fuel pump attendants do! I remembered my hubby mentioning in passing once that our car takes diesel only – so I went to the pump that had diesel. I stopped the car and stumbled out clumsily, feeling completely out of place and very conscious that normal people might be staring at me.

I went around to where the nozzle is and realized that I had parked too far ahead of the pump, and the nozzle wouldn’t stretch to the car. So I unlocked the car, got back into it and reversed. Got out to find I had reversed too much and the nozzle still wouldn’t reach he car! So back in I went and drove it forward just a wee bit. I got out a third time and discovered my hard work had paid off. My car was finally in place!

I tried to yank the nozzle out of the pump but it seemed to be stuck, so I yanked and yanked till it finally came free. With the nozzle in one hand I tried to open the fuel tank inlet, but it had no lever with which to pull it open. I pushed it, tapped it, even tried knocking to see if it would respond but… nothing! I then proceeded to return the nozzle to the pump and went back into the car to investigate how to open the fuel tank! I felt around for a good 15 minutes! I looked under the steering wheel, around the gear box, near the drivers seat, under the driver’s seat, on the steering wheel, near the dashboard, but for the life of me I couldn’t find anything that would open the fuel tank. I opened a few other things in the process, but definitely not the fuel tank. I was actually at my wits’ end when I spotted a small lever on the car door. I pulled it in desperation and heard a popping sound! I rushed outside and to my utter joy, I saw the little fuel tank window open! I quickly locked the car for the fourth time and went back to my business.

The nozzle seemed to be stuck again because I yanked for ages but it wouldn’t come out of the pump. I finally thought that it had been “locked” by the “fuel pump people” so I went inside to ask why they had locked the pump’s nozzle and how on earth was I supposed to fill diesel in my car without a nozzle? A very pretty Indian looking lady informed me that she didn’t know what the hell I was talking about! I ran back to the car in frustration and yanked again and again and again and after what seemed like the hundredth yank, the nozzle finally dislodged and fuel sprouted out of it, flying all over my car, myself amd basically everywhere but inside the fuel tank. I felt like Mr. Bean!

Once I’d got the nozzle in the tank I filled away very confused as to how much I needed to fill and how I would know when to stop, all the while cursing my poor hubby for putting me in this ridiculous situation.

When it was all over I asked the guy behind me who was tearing his eyes out in frustration to take a photograph of me so that I could capture my triumph to prove to all and sundry that “I did it”! I think that might have been the only time I smiled in the entire hour that I was there…for the photo. I may have ended up with permanent frown lines from this gruelling process!

I hope no one lit a match around that area after I left because there was a lot of fuel everywhere, not to mention myself as I arrived home an hour later, stinking of diesel. I found a parking spot right outside my house and bumped right into my neighbour’s car. When I heard the thud I pulled out of that spot and parked somewhere else. Shaking and sick of my adventures I checked my neighbour’s car to make sure I hadn’t damaged it…relief swept over me when I saw that it was fine!

I rang the doorbell to my house and almost exploded when my husband said, “Where have you been and why did you take so long?”

My response to that is too delicate for the eyes of our refined readers!

Getting your beach bod for the summer