Home News Find what you seek 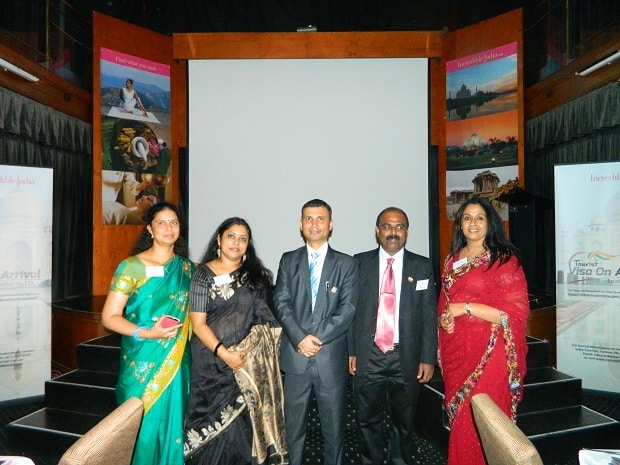 India Tourism Sydney spread the Christmas cheer by inviting over 200 top travel and tour operators, and guests from the Indian Australian community, on board local cruise ship Harbour Ball Room for a three-hour cruise around Sydney harbour.

Though not resembling your traditional Santas, Consul General Sunjay Sudhir and India Tourism local chief Vibhava Tripathi shared the good news of the changes to the visa requirements for India as announced a few weeks ago.

The welcome news of being able to get a 30-day visa on arrival in India was greeted with loud applause by all on board. This takes away an administrative burden which travel agents have had to endure for their clients travelling to India.

Speaking on the occasion, CG Sunjay Sudhir stressed the commitment of his government to promote Indian tourism in Australia. “In his election campaign, Prime Minister Modi promised to build ‘Brand India’ focussing on the 5 Ts of talent, tradition, tourism, trade and technology,” Mr Sudhir said. “Well, the government has shown it is keen to have more people from Australia travelling to India. We are now working towards a Tourism Week and a Festival of India in Australia to promote tourism.”

There are a range of tourist attractions in India and so it is difficult to present and brand India in a single dimension, he said. “We need to increase the numbers of Australians who travelled to India from 160,000 last year to a larger number,” he urged.

Warming to the theme, Madhu Mathen, Manager of Air India spoke about the ease of travelling to India.

“Air India flies every day from either Sydney or Melbourne to India. In fact for nine selected destinations in India, travellers can get their onward journey free of cost,” he told the assembled group. “And for those en route to Europe, Air India can also provide free accommodation in Delhi.”

“Though there are 6.98 million tourists visiting India every year, the Indian government is keen to increase these numbers,” he said. “Tourism currently adds 7 per cent to the GDP of India and is the third largest contributor to foreign exchange.”

Tripathi also spoke about the new slogan for India Tourism. “We have a multitude of options for travellers, be it the newly emerging tourism in river cruises, or tours of the world heritage sites. We at India Tourism understand that India means different things to different people. So, our new slogan is, Find what you seek.”

While Air India provided a couple of lucky door prizes of free air travel to India, Thushara Liyanarachchi from the Taj Hotels group helped with Christmas presents as one lucky guest won seven nights at a Taj Hotel of their choice. The pick is from the entire range of Taj Hotels in India including Taj Mumbai to Lake Palace in Udaipur to Faluknama Palace hotel, some of the icons of the world hotel industry. A fantastic Christmas present for the lucky winner indeed!

Let’s hope their India holiday enables them to truly find what they seek.

To infinity and beyond