A Melbourne educator’s experiments with Gandhi 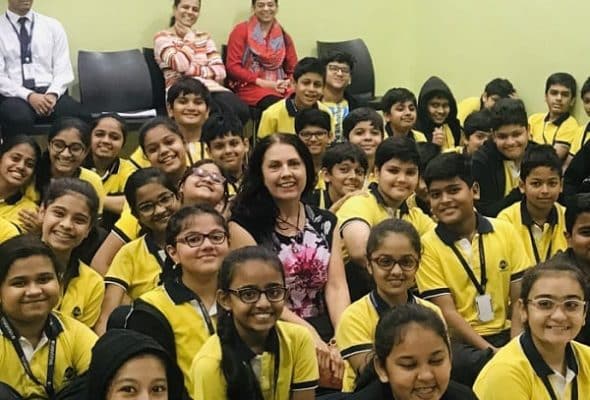 As a teacher of history, Margaret Hepworth would often ask her middle school students in Melbourne if they had heard of Gandhi. About a third of the students would raise their hands.

She would then ask if they had heard of Hitler. Every single child would raise their hand.

Margaret was probably aware that since humans are hardwired for negativity, we know and recall more about ‘bad’ than ‘good’.

But an offbeat remark by a student in the hallway struck a deep chord: “Why can’t we study some happy things? Why does history have to be all about doom and gloom and horror?”

“It pressed upon me deeply that education needed change,” Margaret told Indian Link. “I started questioning what we teach. We say we teach caring and sharing and empathy and kindness, but when we look at the world, we don’t see these things. We don’t see them in business, in the big corporations, in banking, in politics. Where does it all go? Why is there war and conflict?”

The unravelling that began then saw Margaret give up her role as Head of Campus at Melbourne’s Preshil School, and go down what she describes now as a “Gandhian rabbit hole”.

She has since reinvented herself as a peace educator, designing and conducting workshops in Melbourne using Gandhi’s techniques to create change at the individual and societal levels. She calls her intervention program The Gandhi Experiment.

It involves solution-focussed activities based on the Gandhian principles of nonviolence and tolerance, and an attitude of looking within.

“The program encapsulates global citizenship, conflict resolution, and ‘almost impossible’ thoughts where the students open up to their own selves and identify one thing they would like to change, and list action steps to achieve that goal,” Margaret described. “The workshop design has high academic rigour, with a touch of spirituality.”

Personal responsibility is a core element of the intervention, given Gandhi’s emphasis on change coming from within. (Indeed, late adolescents and young adults are highly inspired by that quote often attributed to Gandhi: Be the change that you wish to see in the world.)

The results have been encouraging.

“Measuring before and after, we see a shift up the scale to feeling better about the world and a readiness to make a change. It’s rewarding to see how the students travel towards ‘positive reality’ – a term I’ve coined myself – and change mindset towards positive action. They go away imbued with hope, and empowered to step up and become part of the solution. It’s quite extraordinary; I wish adults, parents, and politicians were in the room to see it.”

Margaret was first drawn to Gandhi as a middle school student herself.

“His message to the world resonated with me,” she recalled. “As a teenager passionate about social justice, it made sense deeply to use nonviolence as a tool for change.”

She became better acquainted with his ideology when she travelled to India as an adult.

“Visiting Gandhi Smriti and meditating at Sabarmati Ashram, I became better entrenched in his methodology. I found ways to bring them into teaching in a very different way, using them to counter the negativity to help bring peace into the world.”

“In respectful debating we listen to someone with a different viewpoint, an oppositional viewpoint even, and hear their perspective.”

It is a life skill that is much needed today, and Maragret’s technique to teach it takes a slightly revolutionary approach, again reminiscent of Gandhian practice.

“In the middle of the debate, we have a moment of silence,” she described. “Imagine a group of high-energy Year 9s, suddenly stop and go silent! They emerge with new angles, new wisdom – ‘I never thought about it this way’ is a common reaction.”

READ ALSO: Gandhi’s Delhi – where to discover more about Gandhiji in the capital

The collaborative debate, non-adversarial in nature, moves beyond the argument and towards solutions.

It is clear that it is more productive to teach Gandhi’s techniques and skills, rather than what Gandhi said.

“We are no longer talking peace, we are teaching peace,” the Melbourne-based Gandhi expert stressed.

Having taken her program successfully to school students in India, Pakistan, China and Indonesia, Margaret is now expanding it beyond adolescents, with successful interventions in Victoria’s Afghan and African communities.

Across the board, Margaret Hepworth’s overarching technique is unmistakable: a pivot to positivity.

Next round of $50K for Hindu community celebrations now open