Inspired by real-life events in Tamil Nadu, the film Kombu Vacha Singamda is a wholesome entertainer that explores caste politics

In Kombu Vacha Singamda, director S.R. Prabharakan is back with another gripping rural entertainer that features Sasikumar in the lead.

An understanding of how the caste system works in rural areas enables Prabhakaran to narrate an intense story on friendship, family, caste and politics. It’s a mind-boggling combination, but Prabhakaran does an admirable job presenting how people in rural areas use these factors in conflicts.

As a result, like a weaver on a loom who knows which threads to hold and which to release, he beautifully narrates a gripping tale that doesn’t allow you to take your eyes off the screen for even a minute.

The film’s story is inspired by events that happened in southern Tamil Nadu several years ago. 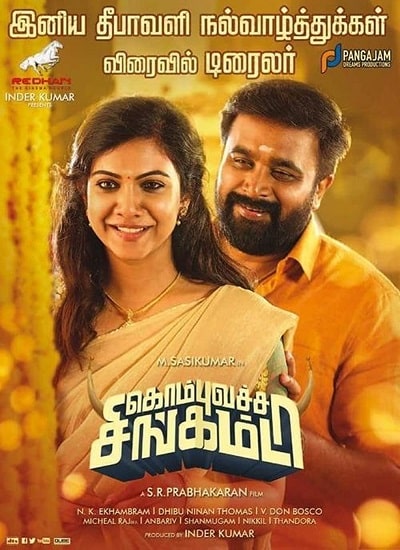 Kombu Vacha Singamda is about a group of six good-natured friends who have grown up together. They set upon themselves the noble task of stamping out caste from their village.

These friends, however, are eventually manipulated into turning upon one another by those intending to keep the caste system intact. How the friends find out they are being manipulated and stop a series of revenge killings from occurring is what the film’s all about.

Director S.R. Prabhakaran is a master of suspense. Just like how he kept audiences guessing in his Sundarapandian, he has them wondering in Kombu Vacha Singamda as to who is responsible for igniting the caste clashes erupting in the village.

From deceit to manipulation, the film shows every dark shade that the human mind can think of and shines the light on how people play games to further their own causes.

To the average viewer, this film comes across as the complete and wholesome entertainer. It has family sentiments, romance, crime and action.

To those with an analytical mind, this film is bound to come across as much more than just a family entertainer. It is bound to offer a better understanding of human relationships and their fragile and inconsistent nature.

Just about every actor in this film delivered, primarily because the casting is just perfect. The lead pair in particular, is outstanding.

Sasikumar, who is known for his rural entertainers, relishes this role and excels in the film.

Madonna Sebastian, who has until now predominantly done only roles that showcase her modern side, transforms herself beautifully into a rural girl who completely blends into this gripping drama.

Her expressions, attire and body language are all perfect. In the scene in which she poses a question to her dad to help Sasikumar find out if he indeed is behind the caste clashes in the village, Madonna is outstanding.

She poses the question in a very soft but serious tone. The question is polite but pointed. And the manner in which she carries herself in that scene is just commendable.

Director Mahendran, who recently passed away, delivers yet another fantastic performance, as does Hareesh Peradi, who plays Madonna’s dad. Soori’s comedy works big time. The actor is in his element and provides the film some much-needed humour occasionally.

On the technical front, Ekambaram’s shots are a delight to watch. In all, Kombu Vacha Singamda is definitely worth a watch. View the trailer here.