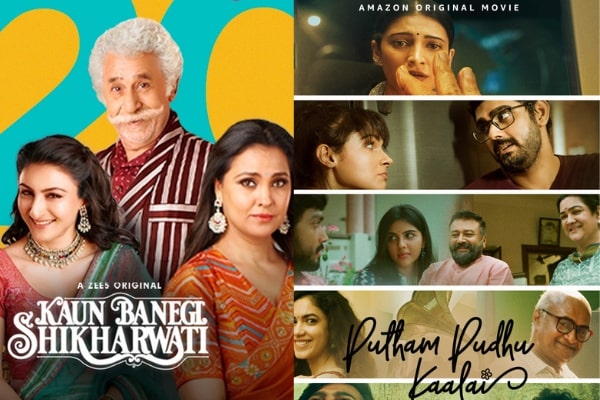 In an attempt to shake off an income tax investigation that risks his palace and treasures, a Rajasthani king brings together his four daughters for some healthy competition – and the royal title is the prize. Who will win? And what will the dysfunctional royal family lose? Find out in these funny 10 episodes, starring big names like Naseeruddin Shah, Soha Ali Khan, Raghubir Yadav, and Lara Datta.

We’ve all seen the films with a threatening male stalker, but what happens when the roles are reversed? In this thriller, a powerful politician’s daughter will do anything to win over her love, even as he slips down a dark path to escape her obsessive love. The series is directed by Siddharth Sengupta (of Balika Vadhu) and stars Tahir Raj Bhasin and Shweta Tripathi in the lead roles.

Promising to explore themes of class divide, medical practice, and the value of human life, new medical drama Human looks at the world of human drug trials. It stars Shefali Shah (you might recognise her from Delhi Crime) and Kirti Kulhari (Four More Shots, Please!) along with Seema Biswas, Ram Kapoor, Vishal Jethwa, and others.

Get the popcorn ready for when Human releases on 14 Jan.

The power of positivity. That’s what the new season Unpaused is about. Unpaused: Naya Safar showcases five unique stories that look at how COVID-19 has made us value life and emotions more than ever. Filmmakers include Shikha Makan (Gond Ke Laddu), Ruchir Arun (Teen Tigada), Nupur Asthana (The Couple), Ayappa KM (War Room) and Nagraj Manjule (Vaikunth).

It’s a 21 Jan release for Unpaused.

According to the ‘Chappa’ system of work allocation, metal tokens would be thrown into waiting crowds of labourers. Whoever got them would get work for the day on the wharves and godowns of Kochi, Kerala. Learn more about this primitive and barbaric system in this new film, which has gone on the international film festival circuit as The Harbour.

Check cinemas for a 20 Jan release.

He quizzes the most popular of popular Bollywood stars on his comedic TV show. Yet Kapil Sharma’s own rags-to-riches life is filled with struggles, power struggles, bratty behaviour, social media storms… and personal revival. He talks candidly about all of this, his love for performance, and his young family, in his first Netflix special.

John Abraham is at it again, in an action flick set in Kashmir this time, in the backdrop of the Kashmiri Pandit issue saga. Minority Hindus are forced to flee as terrorists take over the pristine state. Debutant director Lakshya Raj Anand sets John as a lone ranger resolving a hostage crisis that sounds similar to a certain real life one that caught the attention of a nation. Jacqueline Fernandez and Rakul Preet Singh also star.

Attack scorches up the cinemas on 28 Jan.

READ ALSO: 10 Indian films and series to watch in November 2021

- Advertisement -
Share
WhatsApp
Facebook
Twitter
Linkedin
Previous articleTravelling to India? Airport PCR tests will give you results in 90 mins
Next articleWhy Australia must become a republic