The Former Liberal staffer on why she spoke up about the indecent assault she experienced at work. ANEETA MENON and RHEA L NATH report.

The disparity between women and men in every workplace across Australia is well understood, but less understood is the disparity between men and women of colour, and of white women and women of colour. This week, former NSW State Liberal staffer Dhanya Mani spoke up about the indecent assault she experienced in her job in the #auspol arena. Having approached relevant superiors at the time of her experience, Mani was met with the type of threats we are now hearing echoed across other similar tales.

She told ABC’s 7:30, “I was also told simply that it just wasn’t true, and I was making it up. And the best case response that I got was to say, ‘Well I guess we believe you but if you say anything, your political career will be over and this will be it for you.’”

She further escalated this to the office of the Prime Minister and like much else being reported on the subject, her matter fell on deaf ears. For women of colour, getting a foot in the door in these sectors is already challenging. That they are being driven out due to lack of workplace safety, and in particular sexual impropriety and violence, is a matter that must be resolved in order to seek a truly reflective parliament.

Dhanya is one of a handful of women who have opened up about their sexual assault since Brittany Higgins, a former political staffer, shared her recount of her assault allegedly perpetrated by a senior staffer at her workplace. Each has the same devastating revelation: Parliament House is not a safe place for women to work.

To be a woman of colour in politics seems to be harder still. The glass ceiling does indeed have a bamboo finish here.

“Everything is 10 times harder than it is for other people,” Dhanya told Indian Link. “Frankly, I think there isn’t really that same sort of empathy and immediate sense of community that exists between people who share the same narrative. A lot of people in politics have gone to the same private schools. They know each other. They have networks that exist within their own communities. It’s just easier to empathise with somebody who looks like you and who has a similar cultural narrative to yours. There’s an expectation as someone who is a migrant that you need to learn everything about the culture of the majority, never the expectation that people learn about you.” 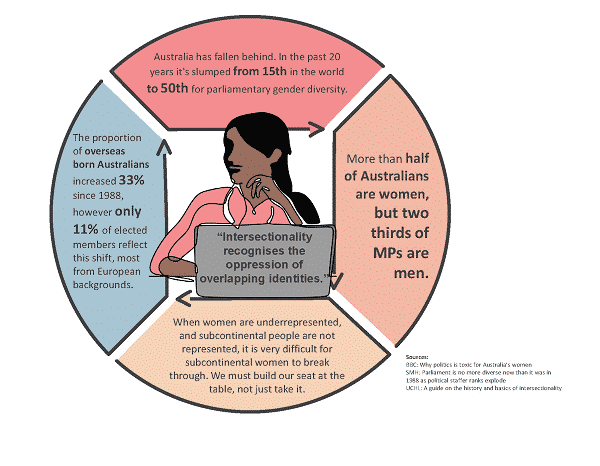 READ ALSO: Time’s up for complacency

For decades now, the #auspol environment has been referred to as a ‘boys club’, with rarely a good news story emerging about the treatment within “the Canberra bubble”. Thrust into focus through a Four Corners expose and now with the allegations from multiple staffers, the statistics that Australian parliament, particularly at the federal level, remains overwhelmingly male and extraordinarily white, are under fresh scrutiny. This is in stark contrast to the actual Australian population, which is increasingly diverse.

And being a woman in politics is no easy task. In 2013, we lived through a period of random men throwing sandwiches at then Prime Minister Julia Gillard. Sandwiches. Seemingly for no reason at all.

Obviously, it wasn’t an easy environment for Dhanya, as a woman of colour, to start talking about her assault. What was the most surprising thing that came out, in her experience, when she spoke up?

“I think one thing that was maybe not surprising, but interesting, were the concerns my parents had. They worried that the community and beyond would judge me, or that this decision to tell my story would be the most important thing about me. The point was, well, these are real issues that women face. And I keep seeing them happen over and over again. It was definitely hard because it’s like, what was she doing with this boy? Well, actually, he came to my house without being invited. But that’s also not the point. I wanted to be able to get over the fake moral outrage of women being around men and realise that there are just more important things to worry about.”

The 27-year-old public servant also emphasises how cultural perspectives bleed into people’s understanding, and sympathy, with these kinds of incidents.

“With the mentality (in the community), it doesn’t feel possible for young people to just approach their parents and say, ‘this thing happened, can you help me?’ It feels like you’d end up in a position where you have to console your parents about the fact that something happened in the first place. Parents need to sort of broaden their perspective and confront themselves with the realities of what people do.”

Mani, along with fellow staffer Chelsey Potter, has responded to the culture of toxicity and victim blaming through an initiative called Changing Our Headline, aimed at creating safer spaces for women in the workplace, particularly in male-dominated fields, like politics.

Speaking about the initiative, Dhanya observed, “I want to be part of changing social problems in society… Somebody from the community needs to put their hand up. I could wait for other people or start to change something myself.”

Part of her motivation comes from her value systems as a Hindu, and an immigrant, in Australia.

“From a very young age, I was asking myself questions about what is really important to me, and what do I stand for. I think a lot of people in our community would probably empathise with the fact that you have a need to make those value judgements at a very young age. All the stories that I read growing up, like the Mahabharata, they are things I’ve strongly internalised. So, it didn’t necessarily feel like a choice. It felt as though it was needed, like a moral imperative.”

And, just like that, it once again falls to the victim-survivors of sexual violence, just as it does in almost every sphere in which violence against women occurs, to do the labour to resolve their own problems after having been systemically failed at every level. Perhaps through the voices of women like Dhanya and Chelsey, we can see a tangible shift. Change doesn’t come from speaking up alone. It takes place once everyone else listens up and does their part to make the world a safer, more equitable place. Perhaps once and for all, we can change not just the headlines, but the world – and the Parliament – which they reflect.

READ ALSO: It’s time to stand up, not stand by