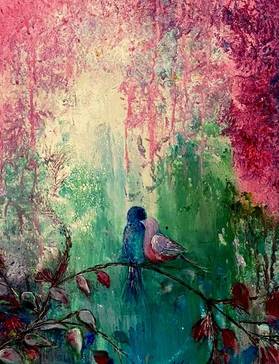 For Ninjit (Nin) Taneja, visiting artist from India, isolation in Melbourne became an opportunity for sustained work on a number of paintings and photos, proving yet again, that art has the ability to keep the human spirit alive.

When Nin arrived in Australia earlier this year, little did she know that she would be stranded for an indefinite period of time, unable to return home to her loved ones.

Her flight touched down in Melbourne only a few hours after the phase two restrictions were announced, and she went straight into a two-week self-isolation.

This meant she missed her own daughter’s court wedding. She watched the civil ceremony through Skype along with other members of the family, spread around the world, including her husband and son who were in New Delhi and unable to travel.

Surprisingly Nin was not fazed.

“I have travelled to many parts of the world but this trip will be forever etched in my memory, for all good reasons,” she told Indian Link.

Initially, for Nin, the self-isolation at her nephew’s house in Point Cook was a welcome relief from the hectic life in Delhi that she had left behind. She felt relaxed and enjoyed the peace and quiet of being on her own for 14 days. Her only regret was that she was unable to be part of her daughter’s special day.

However, once out of isolation, she was able to attend her daughter’s traditional wedding ceremony held at home. “We ensured that we observed all the traditions and rituals of a Sikh wedding despite the restricted numbers and lockdown limitations,” shared Nin enthusiastically.

“Only the immediate family was in attendance,” said Nin as she described the unusual proceedings. “I put the traditional mehndi on my daughter’s hand and the chuda ceremony was held early morning whilst we were still in our night suits,” she laughed. “The baraat travelled from ground floor to top floor where the ceremony was held in a prayer room and the pheras were conducted through religious chants and music on YouTtube. It was simple yet sweet and still very special,” she said smiling contently.

As a present to the newly wed she made a painting of two birds sitting together using a colourful palette for eternal joy and happiness. “I generally work with greens and yellows but this time I changed my colour palette,” said Nin. “Luckily, I had packed some paint and brushes as a last minute impulse, even though at that stage I had no idea my travel plans would change dramatically!”

Nin’s flight back to New Delhi was cancelled within a few hours of her departure when India closed its borders with little warning. Even though she was very disappointed with the uncertainty, she resiliently decided to make the most of her time in Melbourne. Her art came to her rescue.

Armed with her DSLR camera Nin took to bird watching and exploring the flora and fauna native to Australia. She spent hours walking, taking pictures, painting birds, reading and researching on them and appreciating the beauty that surrounded her.

“One thing that I appreciate most about Melbourne is the aesthetically planted trees and plants. The parrots, rosellas, cockatoos, noisy miners, honeyeaters and the amazing variety of birds that I spotted during my walks fascinated me endlessly,” she revealed.

Nin also managed to attract a lot of birds to the backyard feeding them, taking photos, sketching and painting them.

Nin has been painting for more than two decades and her works adorn some of the prestigious places in New Delhi. As a professional artist she works and takes classes from her studio in New Delhi and has successfully displayed and sold her art in many galleries, shows and art camps. Besides being an avid bird lover and photography enthusiast, Nin also enjoys painting in all mediums including metal. She also supports the Nature Forever Society in Nasik founded by Moh Dilawar – it works for the conservation of sparrows that are facing extinction.

Her particular affinity for winged friends is revealed in her paintings. “This was the best time, I felt, to revel in nature’s interconnectedness. I was simply delighted with the diversity and boundless magic of the natural world around me.”

After two months stranded in Melbourne, Nin was able to secure a seat on one of the early repatriation flights to New Delhi.

Another round of quarantine followed, but through it, Nin was sketching and taking her online classes.

Reflecting on her extraordinary journey, Nin said, “I am grateful that I utilised my time in lockdown well; it was an experience that nourished the soul.”

READ ALSO: Jane and Kito de Boer own one of the largest and most varied private collections of Indian art