One of the most intriguing aspects of the upcoming Victorian state election will be the impact of South Asian, and in particular Indian, candidates on the outcome of the poll. Some 13 candidates of subcontinental origin will attempt to win a seat in Victoria’s parliament – either in the Legislative Assembly or the Legislative Council. To be sure, the personalities and policies of these candidates differ despite their common ancestral origins, however, one thing remains the same: a desire to contribute to their adopted Australian home in a way that they feel will best improve society.

It seems all politicians must now increasingly pay attention to persons of subcontinental culture. The 2011 census found that Indians are ranked fourth behind the United Kingdom, New Zealand and China when it comes to place of birth for migrants, with those of an Indian background having a population in Australia of about 300,000. Indians are among the fastest growing ethnic groups in this country. For the first time in 2011-12, India eclipsed China as the number one source of migrants, with 15.7 per cent of the permanent migrant program being sourced from India. Victoria has the largest number of Indians in Australia with about 112,000.

The candidates offer a wide range of platforms, spanning the major parties of Liberal and Labor, as well as encompassing minor parties like the Greens and micro-parties like the Australian Christians. To be precise, six candidates are running as Liberal or Labor, two for the Greens, one for the Australian Christians and two for a brand new party named Voice for the West (its registration is still pending). There are also two candidates who have made a conscious choice to disassociate themselves from the party discipline system and simply run as independents – without being tied to an organisation’s policies. 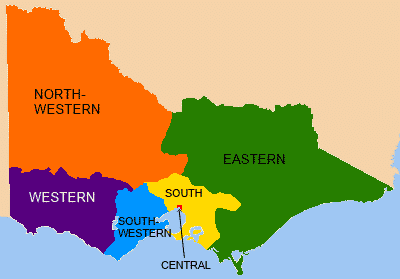 State governments in the modern era have lost many of the powers that were once reserved for them by the Australian Constitution at the time of federation in 1901. They are becoming increasingly impotent due to the federal government expanding its size and scope. However, the outcome of the November election will nevertheless influence a range of issues over which state governments still retain a degree of control. These include health, education, roads, public transport, the performance and accountability of local councils and stamp duty. Increasingly criminal law issues, such as cuts in funding for Legal Aid which are alleged to harm access to justice, are coming to the fore. And naturally social issues such as abortion and the decriminalisation of medical marijuana will continue to play a role in deciding voters’ sympathies.

It’s likely that the election will be a closely contested one. Polling suggests the incumbent Liberal/National coalition is sitting on about 45% as compared to the ALP’s 55%. However, with the election tentatively scheduled for November 29, there’s still time for changes in these numbers. Given the extremely tight outcome of the previous election, which saw the Coalition win 45 seats to Labor’s 43 seats, there’s reason to think that voting intentions will be shaped through the bombardment of advertising in the two months prior to the poll. Analysis by the ABC’s Antony Green suggests there’s reason to believe this year’s election will be decided in rural marginal seats rather than metropolitan areas.

The Liberal Party has recruited four subcontinental candidates for the lower house: Nihal Samara in the division of Altona, Amita Gill in Bundoora, Gandhi Bevinakoppa in Clarinda and George Varughese in Mill Park. Meanwhile, Labor has signed up lower house candidates Sanjay Nathan in Bass and Jude Perera in Cranbourne. The Greens are running lower house candidate Perky Raj Khangure in Mount Waverly and upper house candidate Alexandra Bhathal in the northern metropolitan region. Australian Christians are putting forward Gurmender Grewal in Ivanhoe. And for Voice for the West we have Shashi Turner in Kororoit and Abdul Mujeeb Syed in Tarneit. The independents are Chandra Ojha in Bentleigh and Safwat Ali in Tarneit.

So why are these candidates seeking higher office in the first place? What are they trying to achieve?

George Varughese is a humble personality, professing that he decided to run because he felt that after migrating to Australia in 2006 it was time for him to give something back through public service.

“I was involved in social activities from a young age,” he reveals.

Gandhi Bevinakoppa says that his main motivation is “to be able to contribute to policies to improve standard of living”. His rationale arises out of his passion for community work, having been involved in the Rotary Club.

Then there’s Sanjay Nathan, the 26-year-old Labor candidate for Bass, who has one objective: “I am seeking to achieve change. My seat has been Liberal dominated for too long. I want to be part of the change now.”

Gurmender Grewal of Australian Christians has been involved with his party since the last federal election and is running for two reasons. “First, a lot of politicians are turning a blind eye to the concerns of the public – perhaps they’re overworked or perhaps it’s another reason. Even Christian parties have backtracked on their promises and given preference deals to other parties that aren’t necessarily in favour of Christian principles.” His second reason is that he feels the Indian community needs some kind of representation in the legislature.

Abdul Mujeeb Syed of Voices for the West seeks to get involved because his area “is lacking in infrastructure and not coping with population influx”. He notes, “We are desperately in need of services.”

His fellow party member, Shashi Turner opines that her main motivation is to focus on the field of health and disability and education. Many people running for parliament do not have real-life experience in the health industry, (Shashi has been in the industry for more than 20 years), and she wants to “try and make a difference” using her experience “rather than assuming things” as those without involvement in the area may do. “There are a number of things happening in mental health that don’t get much attention… not enough people talk truthfully,” she says.

Chandra Ojha says this is the first time he’s running for politics and he’s motivated by the desire to improve public amenities for the people of Bentleigh.

Safwat Ali says he’s motivated by four different factors. First, he’s seeking increased cultural diversity especially in the west. Second, he’s not happy with the increase in unemployment. Third, he wants to work for medical services. He also seeks to improve the infrastructure in his constituency. “We’ve seen a massive increase in population in my constituency, but we still only have three or four major roads,” he explains. “The number of road accidents has increased tremendously and this is not acceptable.”

What convinced these candidates to join the party of their choice?

For George, the Liberals are the best choice because of their sound economic policies, which he says are about “creating money and business” unlike the Labor Party. Gandhi agrees, claiming that “I am all for the Liberal principles of encouraging free enterprise. Many people in our community are entrepreneurs.”

You have to wonder how these die-hard Liberal supporters might respond to Sanjay who feels, “Labor stands for social justice and equality. It seeks to give representation to communities; a voice to everyone.” He adds, “All that’s good in Australia has come about because of Labor: Medicare, public education, labour rights – these are the pillars of our society and largely the reason why our parents migrated here.”

For Gurmender, Australian Christians was a natural choice because he’s against same-sex marriage and against abortions. “Even the premier of Victoria is soft on abortion as he doesn’t want to offend too many people,” Gurmender says. “It’s about the economics as well. Housing affordability is a concern for young people and I think both parties are ignoring this. Foreign investors are coming in and pushing the prices of property sky-high.”

Abdul says he decided to support Voices for the West because it’s a “pro-family and pro-small business platform. It’s not left or right, but is right in the middle”. Shashi says she joined the party because she wants to increase awareness of the issues in the western suburbs of Melbourne, an endeavour that deserves the public’s support.

Chandra decided to run as an independent because this allows him to “be the people’s representative rather than a party representative”. He believes party candidates are more aligned towards representing their party rather than representing the people: “As an independent, I can represent the issues that matter to the community irrespective of which party is in government, or work with the state government and take the issues from within the community using the consultation process rather than party processes.”

Safwat also stays away from political parties and hopes that there’s going to be support for someone that rejects the traditional system due to the growth of multiculturalism in his area. “I am hoping Labor domination has gone down,” he says.

George wants to build a career in politics since he has plans to become a long-term supporter of the Liberals.

At the end of the day, win or lose, Sanjay is definitely interested in a career in politics. He finds the notion of people from across the political divide getting involved to try and make a difference, an “inspiring” idea.

Gurmender is “definitely looking at [politics] long term”. He believes “we need more Christians that are strong Christians rather than watered-down Christians – people that really stick with the principles in the Bible”.

Abdul agrees he’d be interested in forging a career too. “Yes certainly. I am influenced by my father, who was in politics in India. In Australia, I am motivated by a desire to see fair representation of the people at all levels of government.” Likewise, Shashi would also be happy to make a career change should the opportunity arise.

Chandra is more tentative about his future plans: “At the moment I’m more focusing on the current election but I may consider running again if the issues I’ve raised this time haven’t been resolved by the next election.”

Safwat is eager to get into politics long-term: “I am very community-minded and all for multiculturalism and social inclusion. Lately there’s been a bit of racism, with certain religions being targeted, and I think by being in politics I can help put strategies in place to remove that.” 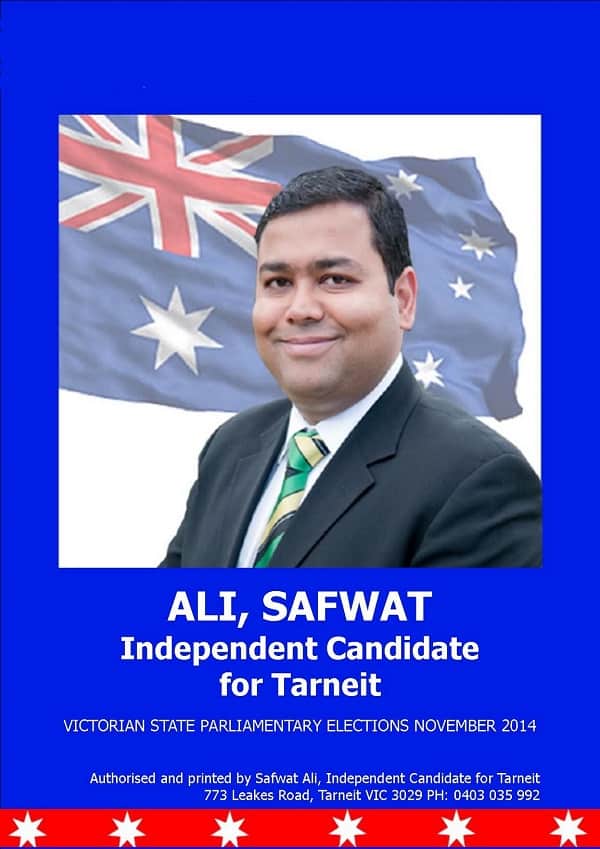 The mix of sub continental personalities and policies that has entered this year’s state election clearly varies significantly despite the common ancestral origins of the participants. All appear committed, however, to community values such as participation and democracy, and are taking the impressive step of forging ahead with their particular brand of politics so as to effect real change in society. The only serving Member of Parliament that is of Indian origin to date has been Lisa Singh who represents Tasmania in federal parliament. Perhaps this year’s state election will add to this tally.