Did the Tigers roar to victory because of Vidya Balan’s match ball, enquires SUJITH KRISHNAN 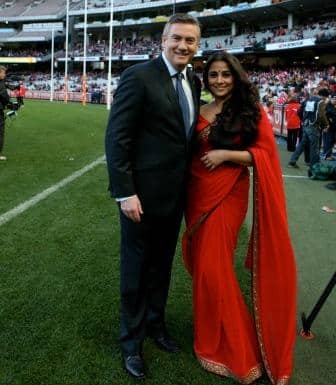 On May 12, fans of AFL team Richmond, better known as members of the Tiger Army, braved blustery conditions to gather at Punt Road Oval in the traditional yellow and black colours to exhibit their support and loyalty to the club, and revel in the merriment at Richmond’s customary ‘Before the Pounce’ event prior to their Round 07 clash with Sydney Swans at the MCG. As a show of appreciation for the wonderful devotion the club receives from its fervent supporters, various activities and games were held for children including a footy clinic which was predictably the biggest attraction at the park. Moreover, autographs from current Richmond players kept fans thrilled and added to the electrifying atmosphere.

In a noble attempt to forge a successful relationship with the Indian community, the club formed the Indian Tigers Supporter Group this year. Moreover, the club has set its sights on playing an exhibition game in India in the near future and to this end, has joined the Victorian State Government Trade Mission in India. Cricket legend Rahul Dravid is also a patron of the supporter group, and was a guest at the ‘Pounce’ event last year. For those ardent Richmond fans, the free Indian Tiger membership offers access to any three home games in Melbourne and a personalised 2012 membership card.

To lend more substance to the cause, Bollywood star Vidya Balan was invited by the club as an elite guest at the MCG, and the star who has in recent times essayed a few challenging roles on screen, attended the President’s function and was conferred the privilege of handing over the match ball to the umpire just before the bounce. Fittingly, Richmond roared past the Swans by 29 points in what was a dominant performance and one can only hope that the presence of Vidya proves to be a lucky charm for the club, hopeful of recapturing its glory days in the seventies when they clinched five premiership titles.