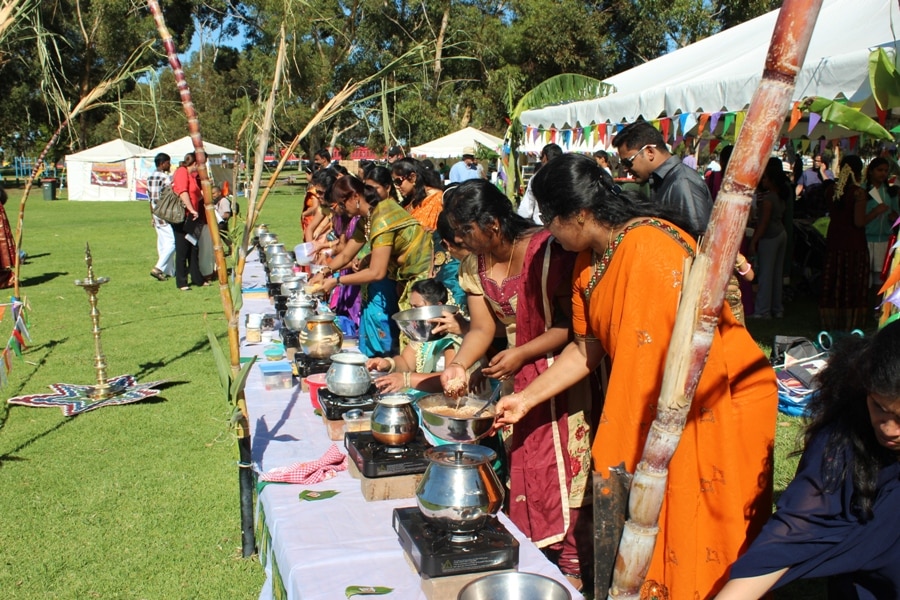 The Associations along with the Adelaide City Council and the people of South Australia will be celebrating and honouring local farmers. In 2015, the event is set to get even bigger and organisers are expecting more than 1000 people to join in the celebration.

This is a free entry event held at Bonython Park, North Adelaide from 9am onwards on Sunday 18 January. It will be an action-packed day with loads of cultural and fun activities for all people.

Events will include a ceremony honouring South Australian farmers, Pongal cooking, Mulaipari Uri Adi, multicultural performances on stage, a variety of food stalls providing delicious meals and a raffle draw.
What is Pongal?

Traditionally, it is a kind of thanks giving festival for the farmers who depend on the natural elements for a bountiful harvest of their staple food, rice.

It is a time when the rich and the poor get together to offer their thankful worship to the sun, the earth, the cattle and their harvested bounty with devotion. Pongal also has an astronomical association with the northward movement of the Sun which is considered to be religiously auspicious and worth celebrating too.

To commence the festivities, houses are cleaned, painted and decorated, and new clothes bought for every one in the family. Traditionally, clay pots were used for the cooking during the festivities and new ones bought, but with the advent of metal this has become symbolic only.

The first day of Pongal is ‘Bhogi’ and it is the time for new to replace the old. Bonfires are lit and all the old unwanted items around the place are consigned to the flames as preparation for the following all important day of the festival of Thai Pongal. 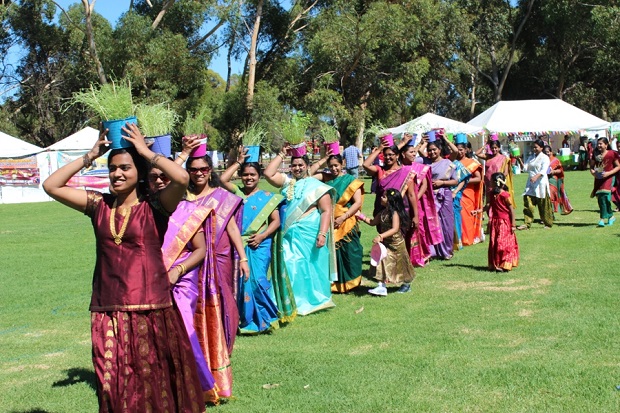 Thai Pongal is the Surya Pongal Day, the day for the Sun God. Before the sunrise, the women prepare the perimetre where the festivities are to happen, draw intricate and artistically amazing floor drawings using rice flour and decorate with fresh flowers. The ritual starts with the preparations to make temporary cooking facilities in the open, usually in front of houses or in a communal area. These places are decorated with flowers, freshly cut banana stems, sugar cane and turmeric plants.

The ritual of cooking the freshly made rice with milk and water is usually started in the predetermined auspicious time and the moment people see the boiling water mixed with milk bubbling out of the cooking pot, everybody shouts, ‘PONGALO PONGAL, PONGALO PONGAL’!

This boiling over of the watery milk is considered, for some religious reason, to be auspicious for the enhancement of goodwill and prosperity for everybody around. The Pongal cooked with the rice, milk, raw brown sugar and small pieces of sugar cane is offered to the sun God and mother earth. There are customs, in some places, to mix this Pongal with water and throw the mixture onto the roofs of houses for the birds before anybody is allowed to consume the cooked Pongal.

The day following the Surya Pongal is dedicated to the cattle which play an important role in farming. On this day all the cattle are washed, their horns polished and decorated with shining colours and garlands of wild flowers over their necks. Every cattle in the household is given complete rest on this day. The farmers offer their worship to the cattle and feed them with freshly cooked plain Pongal rice and freshly cut grass and not their usual dry hay!

Kanum Pongal – The Day to be merry and feast

This last day of the Pongal celebrations is mainly for the households to see friends and family, and to have feasts and exchange goodwill, presents and generally be merry. There are many festivities and playful games of all sorts on this day.

An important aspect of this day is, in many parts of Tamil Nadu, a ritual called ‘Jalli Kattu’ a sport more or less similar to the Matador bullfighting sport of Spain. This is mainly taming and controlling savage bulls for a reward for heroism with participation by young men. Bundles of money and sometimes gold are tied to the horns of these ferocious bulls which the young men try to retrieve.