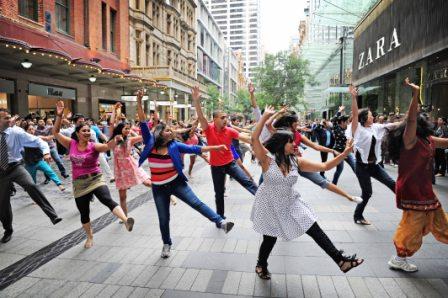 On February 10, sharp at 4.00pm, Pitt Street Mall in Sydney’s CBD perked its ears up to pay attention to what seemed like the sound of a Bollywood tune. A boy and two girls walked to the centre of a clear area. The beats in the background gained momentum and the three nervous artists quickly slipped into familiar and well rehearsed moves. But they were no ordinary shoppers – they were the leaders of a flash mob – bringing Kolaveri Di to the very heart of the city!

Within seconds, six other people joined them. In under a minute, amidst cheers of encouragement from the gathering crowd, a huge group of people were dancing! Dancing in unison to the tune that has taken India by storm in the past few months –  dancing not for fame, not to promote themselves or anyone, but simply to spread joy! Fifty-plus birds of a feather gyrated in perfect formation, cruising into the hearts of Sydney-siders.

The energy was infectious; the tune was catchy; the moves were typical Bollywood style. Pitt Street was instantly the epicentre of a quake of joy. Everyday commuters and shoppers stopped in their tracks, surprised and delighted. Video cameras were held high to record the moment. Mobile phone cameras came out in a flurry. Some spectators however, decided that they wanted to simply record the moment in their hearts. They responded by tapping their feet to the beat of the rhythm and with smiles of approval.

As the dance went on, the cheers got louder. The dancers showed off their skills and moves. It could be argued that there were moments when some of them felt that they were going to be world-famous stars. Some danced like the world was going to end.  Some danced like they owned the world.

There were some with questionable talents too, who seemed to dance more in their thoughts, than in actions. They mimicked the more adept, and carried on dancing. What mattered was that they were enjoying themselves. No care, no envy, no inhibitions – just dancing in abandon!

As abruptly as it started, the dance ended too. The crowd dispersed. People continued on with their business, happy with the momentary – but pleasant – disruption to their day. The ripple though, would now be carried in hearts and also via the media! Five minutes of buzzing activity now left a void on the spot.

It was my wife Rashmi Uttarkar that came up with the idea (yes, we were both dancers at Pitt St Mall!)

“It all started on New Year’s Eve, actually,” Rashmi remembers. A huge Bollywood fan, she had choreographed some 6 dances for an event to mark the passing of the year, and afterwards, as she sat around with her troupe celebrating, someone said she should organise a mass event.

“Flash mob, I thought instantly! The Rang de Basanti performance at CST railway station in Mumbai was so inspiring – my eyes had welled up to see so many people dancing in unison and I had wished I could be part of something that grand”.

Now when my wife gets something inside her head, there’s nothing that can stop her….

Before I knew it she was on the phone to Auckland, talking to a complete stranger Padma Akula who had organised a flash mob there just recently, asking for guidance on how to organise the event.

It was early Jan when Rashmi rang me at lunch one day.

“I called the police today,” she said sheepishly. “I got permission to stage a flash mob”.

Knowing me, she did not prick my bubble contemplative speculation, which basically translated as there she goes again!

By 22nd Jan, we had our first 20 dancers, broken up into three locations: Parramatta, Greystanes, Hornsby and Quakers Hill.

By 28th Jan, numbers were swelling, and we had some practises at Bondi and Greenwich as well.

The excitement, the anticipation, the effort bonded all the participants together in a single melody.

Some rehearsed while watching the YouTube practice video, some travelled 30 kms for a practice session, some braved the rain, some carpooled with strangers, some sacrificed their parties and some took time off from work – just to learn the song!

End Jan, we had our first joint drill. It was such a massive effort. On the second practise at Parramatta my battery operated audio system gave up. I got my car in the car lot to play the song. Practise went off satisfactorily, but afterwards, we found my car battery flat. (Mandeep Raje and Aditya Apte used their car to help jump start!)
5th Feb, Sunday was the next big joint rehearsal.
Ankit offered his car park for practise. (We hired a generator for the practise – no more flat car batteries). 45 dancers now. Passers-by stopped and watched for ages.
Sachin Saraf, gem of a guy, played ‘nanny’, as everyone dumped their kids on him. Everyone was helping, in their own silent way.

The last practise session summed up the rehearsals. Clocks were synchronized, timings were set in stone, logistics were sorted out, the formation, meeting place…. all was agreed on. The weather was the only unknown and unplanned aspect. It was agreed, rain or no rain, the show must go on!

9th Feb, Thursday, last day contacts were made to the Police and City of Sydney Council. All good to go! Over 50 in the mob now, including four Aussies, one Japanese, two Chinese, and several Sri Lankans.

10th Feb, Friday, K-Day, weather was downcast, but not our spirits, especially as the appointed time, 4.00pm, drew near. We had all been praying for the rain to stop. And, guess what, it did, just a few minutes before show time!

I had left the computer in hibernate mode. (The music was on it). As I opened it at 3.55pm – it had switched off! I had to restart. It seemed to take ages to respond, and I was stressed as crazy. Finally it worked, and I was relieved. The flash mob started exactly 10 seconds after 4:00pm…….right on cue as per our plan. (The people who spoke to me in those 4 minutes, must have thought I was a lunatic, or finally become convinced that I’ve always been one!)

We danced our hearts out – just watch the YouTube video and you’ll know we enjoyed every minute of it!

All done, we dispersed as quietly as we had gathered.

4.45pm, it was drizzling, and Pitt St Mall was deserted. The heavens had opened up just for us, we were quite convinced…..

For Rashmi at least, Kolaveri fever continued for a few more days, as she set about producing the video of fit all, recording the past five weeks of our lives for all posterity. For the rest of us, it seemed like a void, really, not having Kolaveri in our lives, seeing it had dominated so much if it so recently. The cure? Another flash mob, you say? Oh, alright…! Want to join us? End of March, Holi, in your best whites. It’s going to be a ‘colourful’ flash mob, we can assure you!

India is now the 2nd worst-hit nation by Covid-19

Soar is a heart-warming tale of Hindu-Muslim brotherhood