Studies in India and Africa show a decline and increase in six stork populations, depending on the country. By VISHAL GULATI 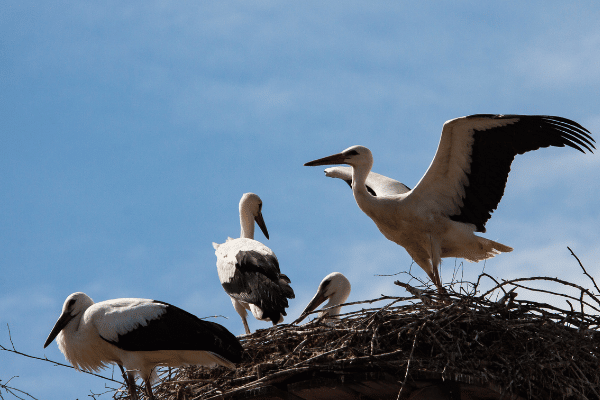 Ranges of six endemic African stork species that are widespread from East to Southern Africa, but have highly fragmented ranges in West Africa, may have declined by over 25 per cent in three decades, says a latest study.

But, separate studies in India indicate a steady increase in the woolly-necked stork, which prefers irrigation canals over wetlands.

In Haryana, ornithologists found a rather large breeding population of storks even in those densely populated villages and towns that have witnessed agriculture for over a century.

The assessments of range wide distribution of the six African stork species and their relationships with protected areas has been published in Ostrich, the Journal of African Ornithology, and is the result of Jonah Gula’s master’s research at Texas State University.

The international team of authors included people from the US, India, and South Africa, led by Gula, now a PhD student at the University of KwaZulu-Natal in South Africa.

“Data is largely lacking on the status and distributions of the African storks. We collated records of these species from secondary sources spanning over 150 years to develop the first distribution maps based on known occurrence of each species,” co-author K.S. Gopi Sundar, a Scientist at the Nature Conservation Foundation, said.

“We used these data to estimate range loss since 1990. We then investigated the relationship between occurrence and the amount of protected area where storks were recorded,” he said.

“We found all six stork species were widespread from East to southern Africa, but most had fragmented ranges in West Africa caused by extirpations in a number of countries, such as Mali and Nigeria,” Gula said.

According to the assessment, the range of the African openbill has potentially declined by 21 per cent. It is most abundant in East and southern Africa in major wetland systems, and in West Africa it occurs in smaller numbers in primarily coastal areas.

An isolated population of openbill remains in Sierra Leone and is threatened by the harvesting of chicks from nests.

The range of the Abdim’s stork has potentially declined by 27 per cent.

As an equatorial migrant, it occurs in huge migratory flocks numbering in the thousands. While it still remains widespread in West Africa, where it breeds during the rainy season, there is evidence of decline on the periphery of its range in the region.

It has increased in number on the southern Arabian Peninsula, specifically Oman, where groups numbering in the hundreds are now regularly found in winter.

It also highlights the utility of using secondary sources to enhance the knowledge of understudied, large birds such as storks.

“Finally, our work highlights how presumptions about status of species with large geographic ranges can lead to regional declines going overlooked,” said Gula.

According to Sundar, the African study has many similarities with the situation in India.

Storks in India have been classified with respect to status without too many detailed studies. The woolly-necked stork for example was assumed to be negatively impacted by agriculture and was raised to vulnerable status.

After evidence emerged that the species is doing very well in Indian agricultural areas, IUCN had to reassign the status to near-threatened to reflect actual data.

“It is possible that storks in Africa are doing better than what we are finding but the absence of work outside protected areas, like for most species in India, is a major gap that needs filling,” he said.

Currently, all bird species have been assigned an IUCN status even though a large number of them do not have the necessary information to do so.

“The race to place all bird species into IUCN Red List status is illogical, reduces the scientific reputation of the Red List, and is not a good way to understand how birds are doing.

“Bird species without information on their habits and distribution, or with very outdated information, need to be identified so scientists can work on them and assess actual status. Our paper on African storks shows the importance of doing careful assessments,” explained Sundar.

“Our work on nesting woolly-necked storks published in a paper was conducted between 2016 and 2020 where we located 298 nests of this species, the largest data set in the world for this species,” said Sundar, also Co-chair of the IUCN Stork, Ibis and Spoonbill Specialist Group.

“We analysed this information assuming the storks in Haryana would conform to patterns of nest location that have been observed in storks globally, including the single nesting stork species in Europe and China.”

Storks are large birds that have attracted enormous mythological and scientific attention over centuries and are closely associated with endangered habitats such as wetlands.

Talking about the assessment of the African storks, Gula said that these storks are very charismatic, and an attraction to them can be seen as far back as ancient Egypt, where the saddle-billed stork was depicted in hieroglyphs as representing divinity.

African openbills, Abdim’s storks and yellow-billed storks were also deified, as evidenced by their mummified remains in Egyptian animal galleries. “I find it surprising that researchers and conservationists have overlooked these species for so long,” Gula adds.

The storks nesting on chimneys in Europe are considered an omen of good luck. The migration of some stork species is celebrated each year as some of the most fantastic animal movements across the globe.

READ ALSO: The curious case of ‘kangaroos’ found in India