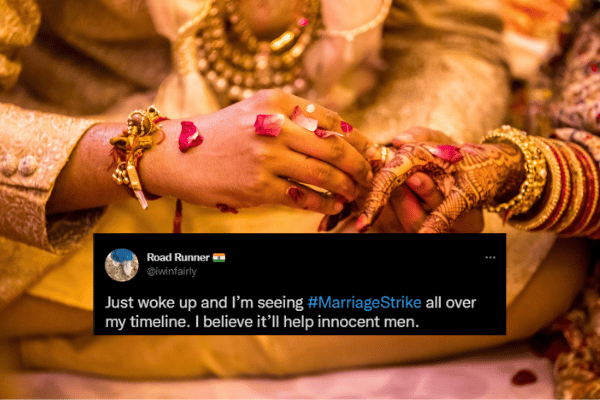 As the Delhi High Court hears petitions challenging Section 375 of the Indian Penal Code and the legality of marital rape in India, men’s rights activists in the country are up in arms. In the past week, tens of thousands of posts using the hashtag #MaritalStrike or #MarriageStrike have dominated social media, threatening to strike marriage for a year.

According to the protesters, changing the law could put men at risk of falsified criminal charges, making it dangerous for them to get married at all.

“Lawyers and Delhi High Court judges can stop treating men as 2nd class citizens and meet our basic demands, then they can call for any number of laws for women,” tweeted Save Indian Family Foundation, a men’s rights advocacy group largely taking responsibility for the trend.

Lawyers and Delhi High Court judges can stop treating men as 2nd class citizens and meet our basic demands, then they can call for any number of laws for women. Till then, it is #MarriageStrike & #MGTOW.

Currently, an Indian man having non-consensual sex with his wife cannot be charged with rape, although he can be charged with domestic violence and other non-sexual offenses. The one exception is if the wife is below 15 years of age.

A two-judge bench led by Justices C Hari Shankar and Rajiv Shakdher is hearing petitions to change the law in India, one of around 30 countries in the world where marital rape remains legal. Interestingly, India is also one of the signatories of the UN declaration on the Elimination of Violence against Women, which includes marital rape.

The #MarriageStrike protesters allege that changing this “biased law” could destroy the Indian family system and particularly favour women in divorce settlements. They claim this violates Article 14 (equality before the law) and Article 21 (right to life) of the Indian Constitution.

Save yourselves from marriage. Marriage has become crime. #MarriageStrike pic.twitter.com/8VJJo0qEBz

To all my brother’s & their fmly members who r victims of fake matrimonial cases. Keep patience & do not worry…Havind d right mindset is very important to fight these fake cases. Keep trending #MarriageStrike to save other ppl from these gender biased laws. Together we win 👍 pic.twitter.com/VzTPBJOzcI

Personal differences with husband are turned into criminal cases based on mere allegations by wife pic.twitter.com/Qatw7ECIkC

#MarriageStrike till the judiciary, government and society will understand that Men’s have Dignity too.#MaritalRape pic.twitter.com/7AmUB8FJjq

For years, activists in India have been petitioning to change the law to argue against implied consent in a marriage. Unfortunately, much of the legal complexities around the issue surround how to define rape by a husband on a wife and the severity of the punishment, as it is more difficult to prove in a relationship where regular sexual intercourse occurs.

Still, violence against women remains a pressing issue in India. In 2011, the International Men and Gender Equality Survey Questionnaire found that over 20 per cent of Indian men had committed sexual violence at some point in their lives. In 2015, a national family health survey reported the average Indian woman is 17 times more likely to face sexual violence from her husband than from others.